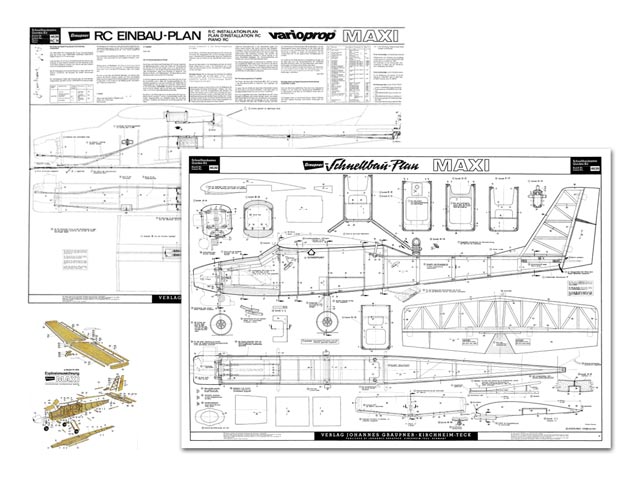 WHAT CAN be said about Graupner kits that hasn't been said already? I recall building my first a Kwik Fly (oz4440) and being most impressed by the accuracy, quality and, at that time, tremendous value. Their latest the Maxi ventures from the traditional built-up structure to a degree, in that the wings are of veneered foam construction (or is it that, in fact, they are now following what has become traditional practice?) As a full description of the kit only appeared in February's Trade News. I won't go into detail here about the contents, but get to the building and flying.

Just shake the box: The fuselage is of simple box construction, which presented no problems, apart from my needing to modify the installation arrangements. As designed, a plywood deck is placed between the undercarriage former and the next rearward one; this is ideal if Graupner radio equip-ment is being used but, when using other systems, such as my own MRC unit, the servo tray will not go between the formers. My solution was to move the u/c former forward tin. and remove kin. from the lower edge of the other one, to allow the servo leads to pass through to the receiver.

The engine mount, which is of moulded plastic and uses the engine backplate screws as a fixing, is mounted to the main firewall with four bolts which, in turn, screw into small tapped brackets fixed to the
rear of the firewall. Fitting this "temporarily," I had problems when it came to making it more perma-nent, as the fibreglass resin I'd sloshed around in the tank bay had already tried to do the job for me, but it had to be removed, to fit the engine.

The tailplane and fin are built up from strip balsa and took about an hour to complete. It is suggested in the instruction booklet that the tailplane could be covered with kin. sheet. As this was not supplied. however, and the tailplane seemed very strong, I elected to keep it an open framework.

Apart from the fact that they are of tapered plan-form and semi-symmetrical section, there really isn't much to be said about the wings - even the roots are angled for correct dihedral. As they come, the two panels make up to just over 63 in span, but it says for hotter performance a couple of inches may be lopped off each tip. As I was using the maximum size motor - a .40 - I decided to leave the wing at the larger span.

Finishing and installation: For some reason or other Herr Graupner does not like film cove-ing, and says so - but I do, so that's what my Maxi is covered with! Yellow and white, with black trim. The superb moulded plastic cowl even had marks showing the necessary cut-outs for my particular engine, a very handy coincidence. As I had already made provision for the steerable noseleg and throttle, plus the servo tray, the installation of the equipment was straighforward, using rods for elevator and rudder. (If one uses rod-and-tube linkages, these have to be built in during construction, by the way). A pack of ric fittings, sold as an extra, does in fact contain some items actually necessary for completing the airframe - strip aileron horns and hinges, for instance. Fortunately your RM Co-Eds provided me with this pack, along with the kit, so no frustration here.

Flying: Starting with all trims at neutral, I opened the throttle and she was rolling, steerable noseleg and rudder very responsive, a 40 ft run and she was off, slightly to the right,. full left aileron trim, some up trim. OK, a few circuits. Yes, getting the feel of her now, but the ailerons seem a little sluggish - how's the rudder response? Prod the rudder stick left - wow! - right over. Surprisingly sensitive on rudder, so I decided to fly her rudder
and elevator only for a while, which proved quite satisfactory. However, with rudder and elevator both quite sensitive, it's relaxing to get back onto ailerons, would-you-believe.

After all this, I tried some manoeuvres. With that rudder, stall turns were a treat, of course; the spin was a bit on the open side but acceptable. Rolls were very slow - both ways - and the inside and outside loops were fine, though the outside ones required some correction. With the semi-symmetrical section I had thought the outside manoeuvres would be a problem but no, nor was inverted flight.

Summary: A beautifully prepared kit and documentation, and a perfect model for the beginner who has an experi-enced pilot beside him to help trim it out and so on. I do feel that some of the items in the fittings pack should be in the kit itself, but that is not the Graupner way. Finally, a modeller with only about four hours flying experience flew this model (including one or two loops) for about ten minutes, at a safe height, and thoroughly enjoyed himself! 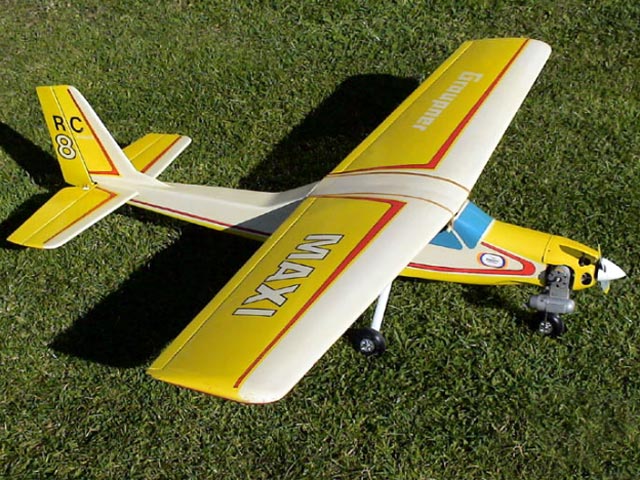