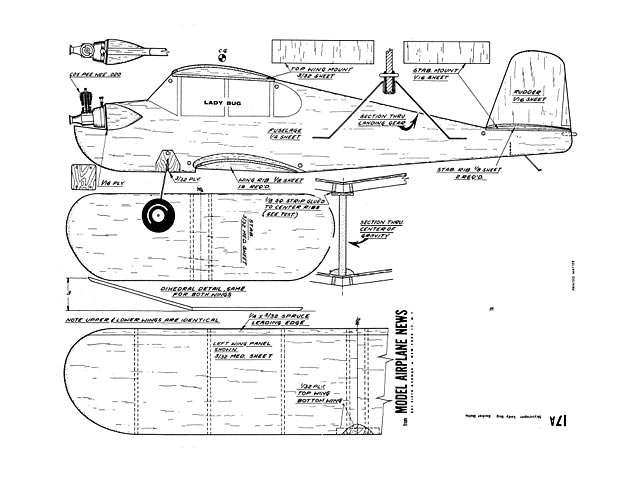 Quote: "Good fast project with a minimum of effort and cost with a maximum of flying and pleasure. Free flight Lady Bug, by Van Hereford.

In designing a new model, it is very seldom that everything works out right the first time, but from the first sketches until the first test flight, Lady Bug seemed to be one of those rarities. The only flight adjustment needed was to trim the rudder tab for turn.

In my opinion a sport model should have the following characteristics: it should:

If you have been looking for a realistic little sportster for your .020 that is easy to build and fun to fly, then Lady Bug is for you.

Wings and Tail Section: Both the upper and lower wings can be cut from one soft 3/32 by 4 by 48 inch balsa sheet. Since both wings are almost identical. I will proceed from this point with the construction of only one wing, but it is best to build both wings simultaneously.

Lay the wing blank flat on your work table, weight it down, and cement the spruce leading edge in place. Make sure you have a smooth joint the entire length of the wing. Do not omit this step as it strengthens the wing greatly and keeps nicks out of the leading edge. Next, using a ballpoint pen, mark off the rib locations and tip outline and cut the wing to shape. Each wing requires eight ribs. These are cut from 1/8 sheet.

Turn the wing upside down on your work table and cement about one inch of the trailing edge of each rib in place. At this point the lead-ing edges of all the ribs will be standing up off the wing at the same angle. When dry, apply cement to the remainder of each rib, turn the wing right side up and bend it over the top of the ribs. Pin the leading edge securely to the work table. Dampen the top of the wing with warm water if it seems hard to bend. Leave the wing pinned down from eight to ten hours.

To put in the dihedral, first cut the wing panels apart and bevel the center section of each panel with a sanding block, just as you would a hand-launch glider wing. Use Elmers glue in joining the wing halves - it never gets brittle and keeps a certain amount of resiliency that is very important in a joint such as this. On the upper wing glue a Vs- square strip to each of the center ribs. Block sand these until the wing will rest evenly on the center joint and the two extended ribs (refer to the cross-section view on the plans). The wings are completed now except for adding the 1/32 plywood tabs to the trailing edge at the center section of each wing.

Cut the stabilizer to outline, and sand it to an airfoil much like the wing. Dampen the top surface with warm water and mold with your fingers into a curved section. When it will hold its shape, cement the two ribs of 1/8 sheet in place and pin down until dry. Now cut out the rudder, round the edges with fine sandpaper, and cement to the stabilizer..." 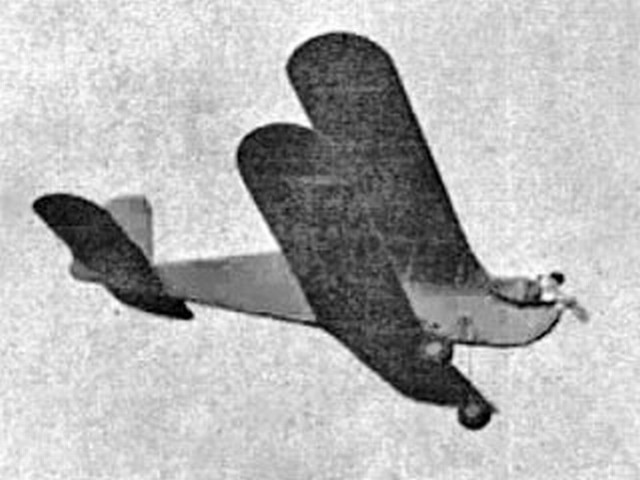