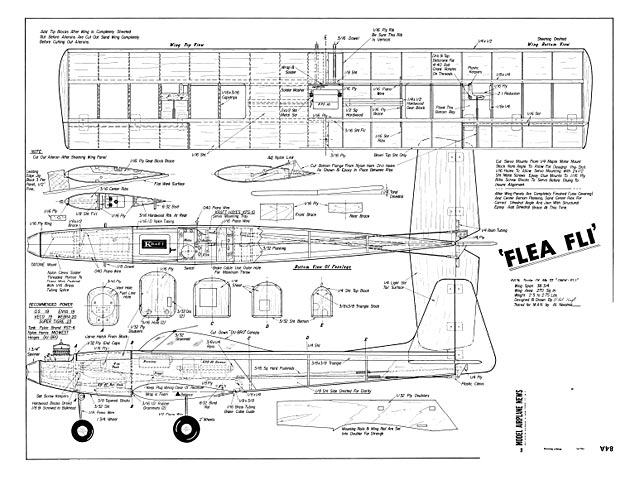 Quote: "Jimmy Witt, one of our infallible technicians, was inspired by Chuck Hayes' new ultra miniature servo to build a semi-scale 70% size Mk III Kwik Fly (oz7431). Jim even haywired the electronics into these tiny servos before prototype electronic layouts were completed: no mean accomplishment. However, Jim goofed in test flying his miniature creation at the Mexico City Nationals: altitude 8,000 feet. Powered by an O.S. .15, the little Qwik-Fli managed to get airborne but that's all. Running out of ideas and altitude simultaneously, he strained it through a tree.

Epoxy cement and a trip to a local Mexican hobby shop for an OS. 19 got the ship back in the air the next day. However, performance at the extreme altitude was still not inspiring.

Back down at sea level things changed. The little ship was a joy to fly. Jim condescended to let me try it and I was immediately hooked. The next day I had my secretary place a call to Sid Axelrod at Top Flite. Can you get me plans for the Mark III photo reduced to 66%? Sid reluctantly agreed, commenting that he bad not even had time yet to get the big Qwik-Fli out and here I was already messing around with a new ship which probably had a kitting potential also. I'm sure he felt that the whole thing was going to create more problems for him.

A few days later, the plans arrived and construction began. Construction closely follows methods used on the large Mark III Qwik-Fli. Against my better judgment Cliff Weirick talked me into a foam wing on the first Flea-Fli. Now I believe foam has its place but only so long as it is on top of a nice cold mug of beer.

Our KP-4B radios airborne weight is slightly over 11 ounces. We, therefore, estimated total weight at 2-1/2 pounds. However, with the dingy foam wing, total weight came in at 2-3/4 pounds. Actually, my concern over weight was unwarranted. The little ship could go to 3 pounds without materially degrading performance.

Test flights proved performance wasn't good - it was great. Never had I had so much fun with any radio controlled model. In general, performance characteristics are very much similar to the larger Mark III, although the Flea-Fli is much faster. Jimmy Witt happened out with his retractable gear Mark III. In an impromptu race, the little one ran away from the big one, retractable gear and all.

A few practice flights and that weekend I entered the Flea-Fli in the Valley Flyers Annual Contest at Sepulveda Basin. Everyone commented on how cute it was, dismissing it as a joke. At the end of the contest no one any longer considered it a joke. The Flea-Fli made second place, only 4 points out of first. Had I just been able to land the damn thing. Oh well.

One thing you don't need to worry about with this ship is running out of time in the AMA contest pattern. It will do the complete pattern in under 7 minutes. I don't mean to imply that the Flea-Fli is the all out answer for competition but in spite of its small size, it can be competitive. It has the inherent disadvantages of small size in regard to having to fly very low and tight, so the judges can see the maneuvers. Being small, its also difficult to see in certain attitudes. I succeeded in blowing just about one maneuver per flight because I couldn't tell what it was doing. Also, it flies through the pattern so quickly that you barely have time to line up between maneuvers.

For sport use, there are nothing but advantages in favor of the Flea-Fli. It fits fully assembled in the trunk of even the tiniest mini car. One squirt from the fuel bulb and the 4 ounce tank is full. There is not much to wipe down after flying. It's quicker and much less expensive to build and maintain. There are many really excellent 19 RC engines available. Most important, it's a lot more fun to fly. As one friend commented after a turn at the sticks - Who needs anything else?

As to flight peculiarities of the Flea-Fli, there really are none. We did use about 3 deg right thrust as torque is a bit more noticeable on the small Qwik-Fli than on the large one. The CG position is shown at about 40% of the wing cord. You may have to add a slight bit of weight to the tail to obtain this balance point.

The wing loading on the little ship is higher than on the larger Mark III. At the Denver Mile High Contest, Cliff Weirick found out the correlation between wing loading and altitude. Flying his new little Flea-Fli in the pattern event, Cliff pulled out of the last half of the double stall turn too slow too low and that was it..." 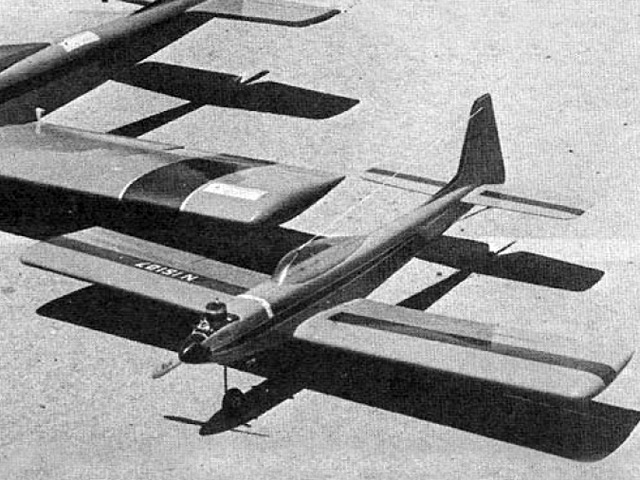