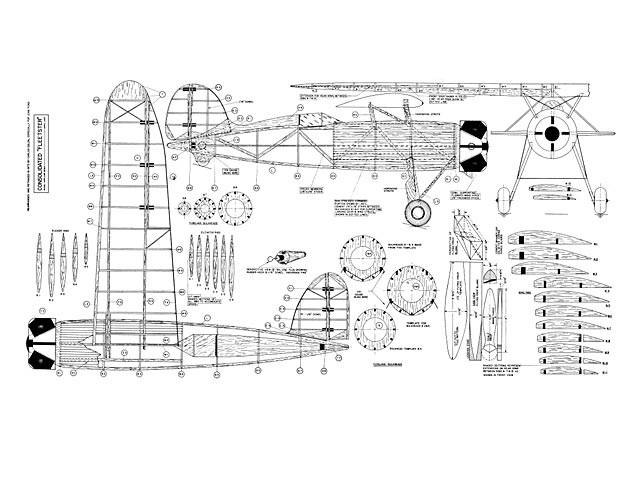 Quote: "Rearranged and retraced in 1973 by Carlos Colon, especially for John Pond."

Quote: "How You Can Build and Fly an Exact Scale Model of a Famous Transcontinental Mail Plane. Consolidated Fleetster, by Joseph Battaglia

HERE is a ship with which lots of you fellows must be familiar. It came out in 1933 as Transcontinental and Western Airlines' mail and passenger carrier and was used on their western run until the department of commerce decided not to allow the air lines to carry passengers in single-engined ships. It has since been replaced by multimotored ships and has become more or less obsolete, but the Fleetster will always be known for its clean lines and the faithful service it rendered to the air lines and private owners who used it.

Before you start working on this job it is advisable that you study the drawings carefully, then get all the required materials as described in the Materials List after which you should be ready to tackle the job at hand.

Let us assume you have done as suggested above. You are now prepared to start work. The first step would be to match the drawings and trace all the templates of the ribs, bulkheads, etc, onto tracing paper, then transfer them to Bristol board or cardboard.

This done, cut them out and trace the outlines of each onto balsa or the type of material prescribed in the list. Now cut out each component part and as you finish them, place them aside.

Take four strips of balsa 1/8 x 3/32 x 13 inches; placing them on the side view of plans, mark the bulkhead stations on each piece. These will represent the longerons, so place them on the bulkheads opposite each other.

First cement the top and bottom strips in their respective places to each bulkhead. Allow the cement to dry, then fasten in the side longerons. Next fasten the four pieces which form the landing gear and wing strut braces extending between bulk-heads I and 4 (shown in dotted lines).

This done, place in all the other strips, cementing each firmly (the latter pieces forming the stringers). Nov place in the compression members, marked (CB) cementing each in firmly.

While the cement dries, make the shock absorber springs, (shown on bulkhead templates 1 and 4, 2 and 3). Make one each for bulkheads 1 and 2 as shown and cement in place firmly. You will notice that between bulk-heads 7 and 8 there are cemented four pieces of balsa. These pieces are placed in to fill the spaces between the four longerons and strengthen that section of the fuselage onto which the tail sections are fastened. You will also notice that these pieces are drawn in dotted lines between the four longerons on the templates of bulkheads 7 and 8. These are to be made from 3/16 thickness stock. Cut them to he right shape and then cement them in place.

The next step is the nose cone and tail end plug. It is best to spin them on a lathe, but should you be unable to get the use of one, you can build them up in two halves. The nose cone is hollow as described in the cross-section views, shown in side and top views of drawings. Make it as shown then drill a 5/16 hole at the front end..." 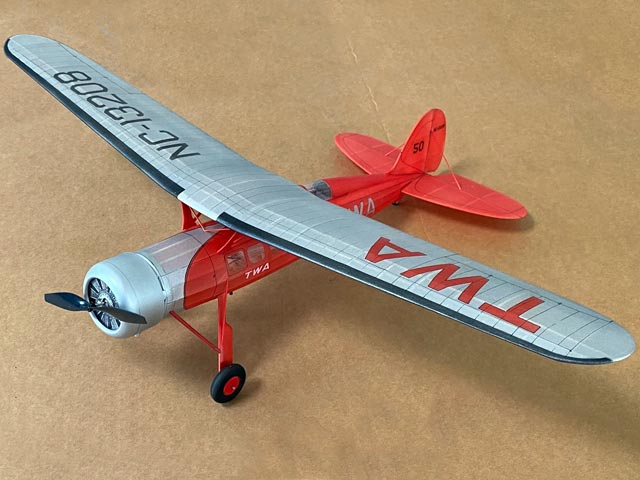 Steve, Have recently completed a couple models from your plans. This one is the Consolidated Fleetster. I built it in 24" span with an electric motor for Power Scale free flight [main pic, 003-006]. Thanks for making this possible.
Best,
David Wagner - 08/09/2020
Add a comment