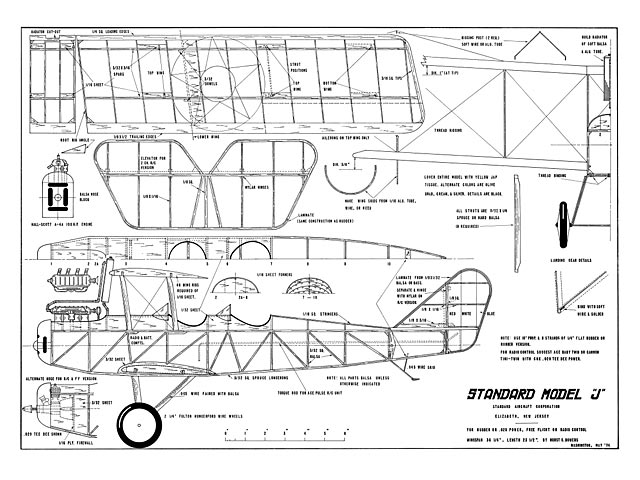 Quote: "A 'Standard' of Excellence. Rubber power or an .020 for free flight or R/C can put this soul-stirring ancient bipe into the air for you to enjoy the satisfying beauty of scale. Standard Model J, by Hurst G Bowers.

Few airplanes played so important a role during the fledgling years of aviation in this country, or received so little recogni-tion as the 'Standard' biplane. This neglect was compounded by continuous misidentification, for invariably the Standard was confused with the Curtiss Jenny. This situation prevails even today in aviation publications, for there is a slight resemblance, and the general tendency is to refer to any World War I period trainer as a 'Jenny', just as the non-flying public of recent years referred to any lightplane as a 'Cub'.

The design goes back to 1916, and Charles H Day. It was produced in quantity by the Standard Aircraft Corporation of Elizabeth, New Jersey and license built by two other contractors. Over 1,600 of these aircraft were produced as trainers and used during World War I. Production of commercial variants continued well into the 1920's when they became a favorite of barnstormers. An October 4, 1920 issue of Aerial Age Weekly advertised it as the Lincoln Standard 'Tourabout,' available through Nebraska Aircraft Corporation of Lincoln. The original version, which I have selected for modeling, carried a 10 degree sweepback and was powered with a water cooled Hall-Scott 100 horsepower engine. Subsequent models had a straight wing and were powered with OX-5's and Hispano-Suisas.

A study of the plans makes it quite apparent why this aircraft was selected for modeling. The wing area is generous and with the sweepback, scale dihedral may be used. There is considerable gap between the wings and the moments are such as to insure maximum stability. The design, lends itself beautifully to the lightweight con-struction necessary for rubber power, yet is sufficiently strong to handle an .020 engine for Free-Flight, and perfect for single channel Pulse Radio Control. Additionally, it is entirely capable of accomodating the new two channel lightweight Cannon. Electronics Tini-Twin radio equipment. For a ball field and the small field flier, this design just can't be equalled. The crowning touch for this model is a 2-1/4 in dia pair of the beautiful Fulton Hungerford scale wire wheels. If you are a biplane fan, and like lots of simple details, wires and rigging, how can you pass up building this 'Standard' replica? Best of all it's quick and easy, and promises many enjoyable hours of flying.

I wish to point out that the model shown in the photographs illustrating this article was built by Charley Roth of McLean, Virginia. charley is a senior government executive in Washington whose modeling days go back into the 1980's, so naturally he selected the rubber powered version. As is apparent from the pictures, his craftsmanship is impeccable.

Building Notes. The construction of this model is entirely straightforward and conventional, and even an inexperienced modeler should encounter no real difficulty with it. I will not go into 'stick by stick' details on how to build each part, but will attempt to point out and explain areas where possible difficulties could occur.

When building the fuselage note that 3/32 square spruce is specified on the drawings for the longerons, however if you have difficulty obtaining this excellent material you may substitute hard balsa. The 3/32 sheet balsa butt-plate should be traced carefully from the plans and drill-ed for the lower wing dowels before assembly for it insures accurate incidence in the lower wing. Should you elect to build the two-channel Radio Control version, you may substitute 1/8 square balsa for the fuselage structure, however, it really isn't necessary if the spruce longerons are used and an important point to remember is that in a model of this category where scale performance is sought, weight is critical..." 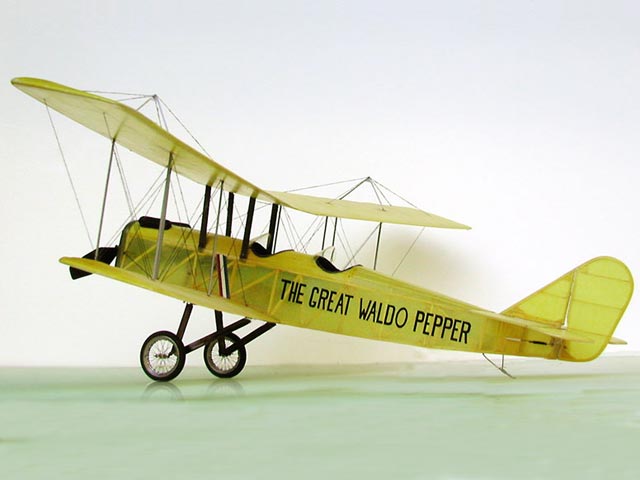