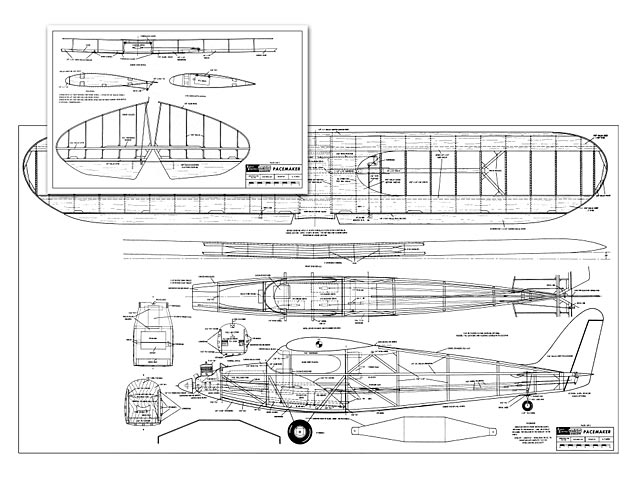 Quote: "Irwin Ohlsson's famed Pacemaker, designed by Ted Woolsey in the 1930s, is brought out of retirement by Brother Ken. The grand old lady of free flight is all decked out with full proportional control and rarin' to go.

The Pacemaker II is a most unusual ship by current R/C standards and configuration. Old-time free-flighters among the RC fraternity will recognize it as Ted Woolsey's design for Irwin Ohlsson in the 1930's. A renowned flighter in its day, Ted's brother, Ken Woolsey, an airlines pilot and competent RCer, modified the famous old design for radio control in 1963. More recently, additional modifications were made, and the ship is currently flying with a Bonner Digimite proportional system, as shown on the plans.

As presented, this is not a construction article, inasmuch as we do not expect the inexperienced RC'er to tackle this project. The plans are completely detailed, and the proficient RCer will have little difficulty in reproducing the Pacemaker. It does, however, follow the construction methods of the early free-flight models, and as such, is a departure from the current slab-sided designs that can be put together in a few evenings. One note of caution - when constructing the Pacemaker II use a liberal amount of cement, particularly where longerons and uprights are joined. Ken found Ambroid to be the best for this purpose inasmuch as it has excellent body residue and is fast drying. Another recommended bonding agent for this type of construction would be the newer Franklin Titebond.

Truly, this plane is an aerodynamic beauty, and will undoubtedly bring back many nostalgic reminiscences to the free-flighter of the 1930's and '40's. But, in addition to these attributes, the Pacemaker II is an excellent performing aircraft with modern radio equipment. It will perform the AMA pattern with the exception of the proto taxi and braking maneuver. The flat wing with 1-1/2 degrees dihedral provides good inverted performance. For the first outside loops, however, use plenty of altitude - this is not an 80 mph modern-day multi! By far the most spectacular maneuvers that Ken has been able to accomplish with the Pacemaker II are the rolls, which are started with plenty of speed vertically, which then become momentarily horizontal, then end up in a power spin at full throttle. Recovery is very prompt with opposite rudder and neutral elevator applied at about one-and one-half turns and all controls returned to neutral and 2-1/2 to three turns. The stalling characteristics are most favorable with no tendency to spin out..." 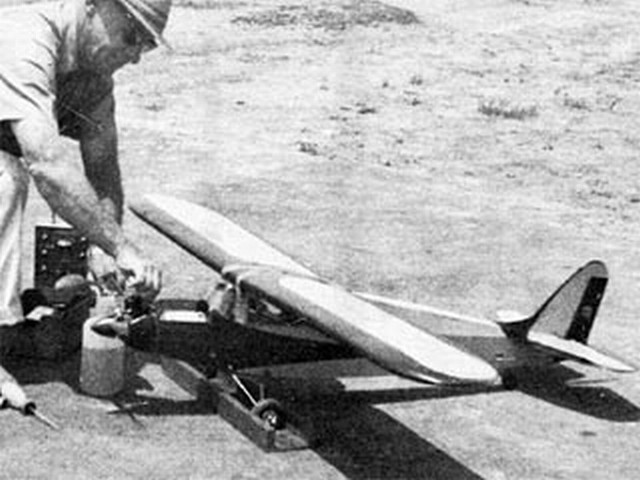