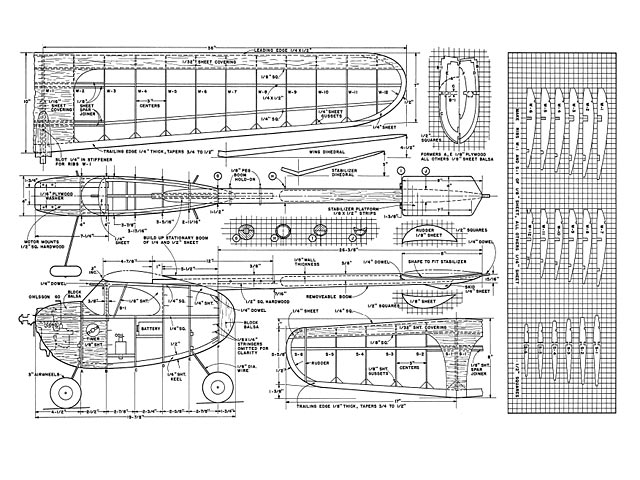 Quote: "A class C thermal hunter with a touch of realism. Aero Car, by Edmond Hammitt.

Here is a most unusual design - a true version of the future airplane to come. The Aero Car was designed purely for sport and experimental purpose. I must say the Aero Car has lived up to all my expectations, the climb is extremely steep, the glide fast and flat. She has proved to be a good stable airplane. The Aero Car is assembled and disassembled in four sections: the fuselage, wings, boom, and tail surfaces.

It was designed primarily for the Ohlson 60. It has a wing span of 72 in, an aspect ratio of seven to one, and a Clark Y rib section. The original design was directionally unstable. The only change needed was to attach the rudders to the stab.

Theory: The theory upon which the Aero Car is based has been proved in my past designs. It isn't a simple matter of placing the wings as high as possible above the center of gravity. The fact is that the most efficient model in terms of its lift and drag ratio, disregarding stability, is the ship with its center of gravity, lift, and resistance as close together as possible.

This force arrangment has a tendency to make gentle turns because center of lateral area is only slightly above center of gravity, the displacement axis having a slight negative inclination. This causes the ship to respond to the rudder readily. It holds its hank without spiral diving because the neutral axis lies below the center of gravity, which gives a lighting tendency.

The nose moment is 10% of wing span and the tail moment is 42% . The chord of the wing is 14% and the stabilizer is 45% of the overall. A tapered wing was used to keep the center of lift forward of the center of gravity and yet have pleasing lines. The construction of the wings and stabilizer were so designed to prevent warps, if proper woods are used. If any builder comes across faults or better points, I would appreciate any suggestions given.

Fuselage Construction: The fuselage construction is not as complicated as it looks. The first step is getting a hard. piece of 1/4 in sheet balsa for the keel. This keel establishes the correct angular relation of the wings to stabilizer, as well as the relation to the thrust line, so reproduce it accurately. The formers are of 1/8 sheet balsa made in two halves. After formers are cut out and cemented together..." 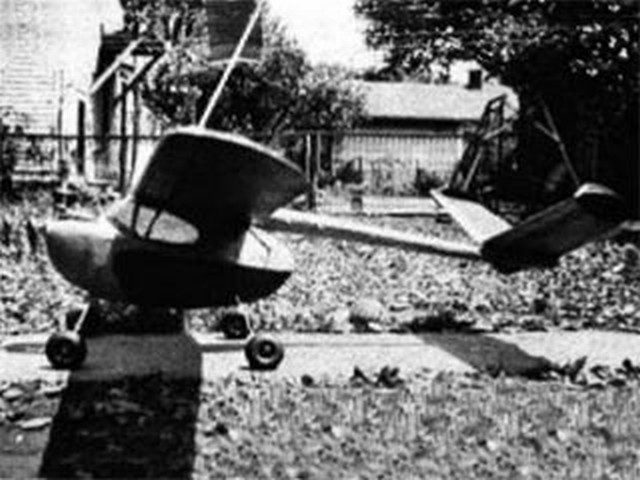