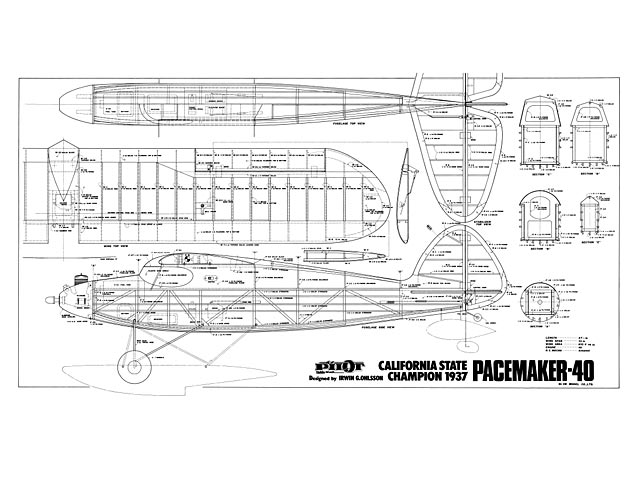 The Pacemaker design was kitted (as a FF model) by Ohlsson Miniatures, around 1940. This here is a much later re-designed version for radio control (also with added ailerons) from OK Model / Pilot / Hobby Shack. Modified for R/C by Irwin Ohlsson from the original 1937 design by Ted Woolsey.

Quote: "The Ohlsson Pacemaker 40 was commissioned to be manufactured by OK Model Company, better known as Pilot, exclusively for Hobby Shack. This is a very high quality balsa kit, with all balsa parts hand machined and plywood parts so nicely die cut that they fall out at a touch. The Pacemaker is a fun airplane with nostalgic looks, but still modern enough to be attractive today. Being originally designed as a free flight, and a contest winner at that, it most certainly makes one fine radio control model for the novice and old timer alike! The construction, though not difficult at all, is a bit more unusual than the typical 'box' style trainer, so we don't recommend this for your very first model to build!" 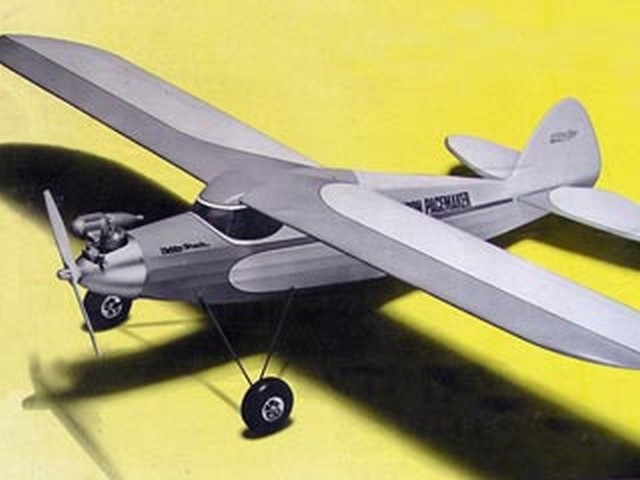 The scaling on this plan is something of a mystery to me. It says 73, but it measures 69. I am assured that the paper plan as scanned had a 69in wingspan, and not 73in as it says in the title block and on the kit box artwork. Does anyone out there know any more about this? Did the kit ship out at the wrong span? With a wrongly scaled plan? Strange.
SteveWMD - 09/11/2015
The original one of 1937 still exist today in Model Craftsmanship Museum. 68" wingspan, 48" length. It's a mystery, I'm looking for the original plan.
Pit - 09/11/2015
There was a plan in RCM from around 1979, or probably a couple years earlier, for a Pacemaker that might be the one just posted. If you or a member have access to an RCM plans catalog or, better yet, the old issues, you can check for dimensions and probably a construction article. Had great intentions to build one back then but never did. Loss of the flying field and family demands put a stop to RC flying for a number of years.
BillHibbets - 11/11/2015
Also stumbled upon this site with a bio on Irv Ohlsson: http://www.craftsmanshipmuseum.com/Ohlsson.htm The Pacemaker is referenced and the wingspan given as 68". Now I've got to build one.
BillHibbets - 11/11/2015
Yes, regarding the RCMplans version of the Pacemaker, that one is 'Pacemaker 2' plan no RCM 308, from August 1966. It's online (at low res) thanks to DavidTerrell at http://www.rcgroups.com/forums/showthread.php?t=2233857&page=263#post31490806 Will try and find a clearer version of that to post up. But it's a substantially different plan to this one here from OK Model Pilot.
SteveWMD - 11/11/2015
Original plan says Munk m6 airfoil (Naca-Munk) also noted as Naca M6. The airfoil on the OK Pilot plan seems to be a common Clark Y, quite different from the original one. Was it changed for r/c no dihedral wing with aileron?
Pit - 12/11/2015
The Ohlsson Pacemaker on floats designed by the man himself [more pics 005, 006]. Taken in Marlborough, NZ at the Wairau river top of south island.
AlanBaker - 06/09/2016
Added two great images of the Pacemaker 40, thanks to JavierGM [more pics 007, 008].
Mary - 14/02/2018
I just received an unbuilt kit for the Pacemaker 40, along with a Float Kit included. I can confirm that the wingspan measured directly from the plan is 69 inches, so it can only be assumed that the stated 73 inches was a Typo during printing. Although it does have Ailerons, the wing still has 2 degrees of dihedral.
Jed Bond - 25/08/2021
Irvin Ohlssons Pacemaker 40 pictures [009-011]. Hello, here some pictures for your page. Best regards,
Ortwin Kummetz - 01/12/2021
The supplement illustrates a Kalt 45 FC-1 four stroke.
Tomas L Hultgren - 05/12/2021
Add a comment