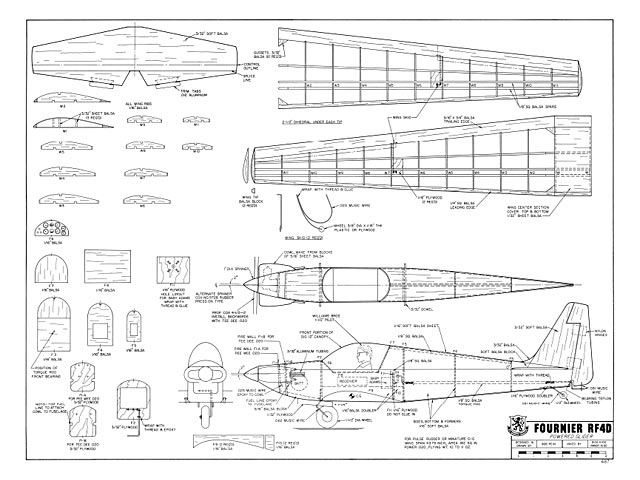 The Fournier model is a dream - it has clean flowing lines, cowled in engine, and flys as good as it looks. The model started a couple of years ago when I saw an article on the Fournier in AOPA Pilot Magazine and I wrote to Phil Paul of Aero Sport in Lanchester, California, who represents Sportavia, the German company that manufacturers the Fournier plane. Phil was able to obtain some 1/20 scale three view drawings of the Fournier RF4D, from the factory in Germany, which I used to make my 1/10 scale drawings.

The full size plane was designed in France and is built in Germany by Sportavia. It is a single seater with a single retractable main wheel and small outriggers on each wing. It is powered by a .40HP Volkswagen engine which gets her up where the fun begins.

The RF4D is stressed for aerobatics except for certain high speed manuevers and has a glide ratio of 20 to 1, which is good considering it is carrying th extra weight of an engine. Its cruise speed is 112 mph and stall speed is 4omph.

It was in a Fournier RF4D that the Czech pilot, Mira Slovak, made the outstanding flight of 8,500 miles from West Germany to California only to crash on his final landing in California where he was very nearly killed.

The model presented here is exact scale except for an enlarged stab and rudder, slightly increased dihedral, and balanced rudder design. I used the balanced rudder to reduce the load on the Baby Adams actuator. I also used the Ace Baby RO pulse radio system which weighs about 3 oz. The complete plane with Cox Tee Dee .020 weighs 10 oz. With 182 square inch wing area, this weight gives a fairly low wing loading for good soaring. Some readers may like to use a lightweight galloping ghost system such as the Ace Mini-GG actuator to have rudder and elevator control.

Constrcution. The wing is built in three sections: Right, left and center. Cover the bottom of the center section with 1/32 sheet balsa at this time. Choose hard straight balsa for the wing spars and leading and trailing edges, so that you don't build in any warp problems. I like to install the antenna in the wing for a neater appearing finished model. When building the left wing, lay thin hookup wire in the notch for the top spar before installing the spar, itself, leaving about 6 inches hanging out the wing root to run through the center section and up to the radio..." 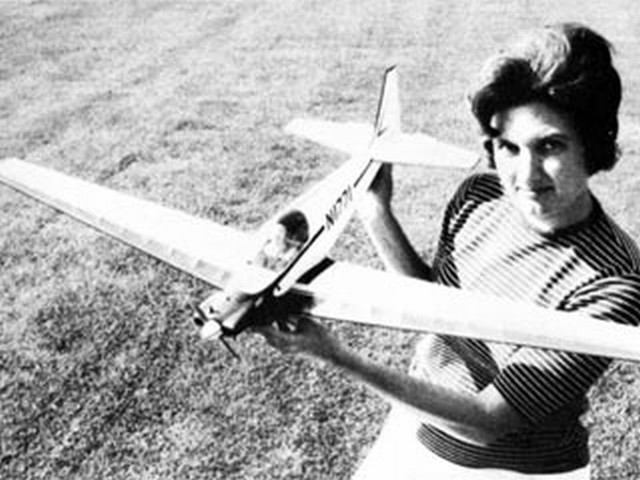