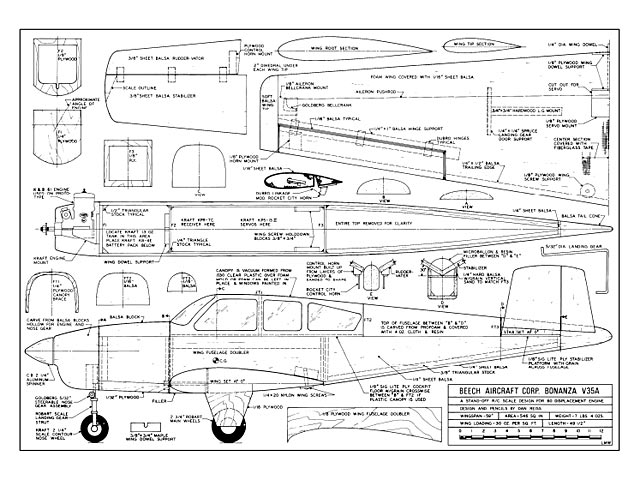 Quote: "This Sport Scale beauty has all the charisma of its full scale counterpart. For 60s. Bonanza, by Dan Reiss.

Aircraft recognition is an art developed to a high degree of refinement by any kid on the block interested enough in planes flying overhead to look up. It took World War II to really make a science of this. The importance of recognizing friend or foe by just the shape of the aircraft could never be overstressed considering the consequences of a mistake. Some planes were easier to distinguish than others. I'm sure more than one Hellcat was the target of friendly fire as its fast moving silhouette looked close enough to a Zero's to encourage a nervous sailor's itchy trigger finger. But how about a Corsair? That inverted gull wing was distinctive. There was no mistaking what airplane was approaching when it was a Corsair. The same goes for a P-38. You just knew whose side they were on. These latter two aircraft had unique features that distinguished them from their contemporaries and the Beech Bonanza is like them. The butterfly-like beauty of that V tail is synonymous to the Bonanza as much, if not more than any other physical characteristic of any other airplane. Just like the opening of Beethoven's Fifth stands for V, the V tail is the Bonanza and it immediately comes to mind whenever a V tail is seen on any aircraft.

There have been many renditions of the Bonanza as models in the past, but none of them were what I was looking for. If they were semiscale, they were usually so far from reality that they were barely recognizable as being Bonanzas. On the other hand, if they were more accurately scaled, they were far more complex than I would care to handle. The V tail and huge canopy seemed to present insurmountable hurdles. After a bit of thought, I have come up with a compromise that encompasses all my needs and hopefully yours too if you're interested in this type of semi-scale model. I have tried to maintain the most distinguishable features of the Bonanza, the V tail and the cabin area, in their proper perspective and proportion to the whole airframe while taking barely noticeable liberties with other dimensions to make the model attrac-tive and yet easy to build and fly.

Beech Aircraft has a drawing available spe-cifically for modeler's use. It's their drawing 35-001124 and they'll gladly send it to you for the asking. I used it to design my model. Strangely enough, a planar view of the tail is not on the drawing. It showed only the vertical and horizontal projections. Not wanting to tax my brain with some high school trig and geometry that I probably have forgotten, I sent a nice letter to Beech telling them about the model I was in the process of designing and about the view they had erroneously left off the print. I received a nice letter back from one of their PR men explaining that there was no error made. Beech feels that the planar view of the V tail is proprietory information.

Since there is more than one way to skin a cat, I went down to my local airport, put my 28mm lens on my camera, got down on my back under the V tail of a Bonanza and took a picture of the planar view of the V tail. This was definitely a first for me because usually I take pictures of three views and blow them up. Now, I was taking a picture of a full sized view and reducing it.

As I said before, this is a semi-scale model that's easy to build. Except for the tail and canopy, the plane assembles like any sport pattern ship.

The model wing is foam, covered by a balsa skin. The barndoor ailerons and associated linkage are rather conventional and require no discussion if you're experienced enough to build a plane like this. The only thing that's unusual are the landing gear doors. They are not attached to the landing gear but are glued to the wing. Do this after you paint the airplane. Finish the wing and doors separately.

The main fuselage structure is the box formed by the full length 1/4 balsa sides and the formers. I have utilized a foam block sanded to shape and covered with four ounce cloth to obtain the contours of the canopy and top of the rear fuselage. You can keep the en-tire fiberglassed foam block in place and paint in the windows or you can cut off the portion around the cockpit area and vacuum form a canopy using the foam as a mold. I chose the latter since the transparent see through windows and windshield add an enormous amount of realism and attractivness to the model. If you are going to go this route, you'll have to put one of the best finishes you've ever achieved on the foam block because the slightest imperfection shows up in the formed canopy. You'll also have to look around for someone with a sizeable vacuum forming machine. A good place to start is in your telephone book under 'Vacuum Forming'. The canopy is formed from .030 clear sheet. Once you have the canopy, the tough part comes next. That's getting it on to stay and making it look decent. It takes very careful use of five minute epoxy, resin, cloth, microballoons and lots of time..."