Quote: "This plane won the Control Line Precision Aerobatics Concours d'Elegance award at the 1982 Nationals, so you know it has what it takes in the looks department. Then the author/designer went on to finish a very respectable eighth in the event. Subsequently, he won at the 1982 King Orange International. Design philosophies are worthy of note. Dove 650, by Stan Powell.

THERE ARE MANY addictive influences in our Society; we read about the most common ones in daily newspapers. Little did I realize, that day in the spring or 1975, that l was about to become an 'addict.' I had just finished building a workshop in my house, and I was itching to find a project. I had accompanied my wife Sandy to a craft shop and while she was shopping I spied a small model airplane department on the other side of the store. You can guess what happened. When we left the store. Sandy had her goodies, and I had mine Top Flite Nobler (oz525) kit.

Later that summer, Sandy and I made a detour on our vacation to the Southeastern Regional Championships in Winston-Salem, NC, where we watched Les McDonald and Gene Schaffer battle it out for first place in Expert Precision Aerobatics. Boy, was I impressed! I wanted to do what they were doing so badly that my mouth watered. That was it - the 'injection' that did me in - I was hooked! Since that day, Stunt flying has occupied a prominent part or my life. Fortunately, God blessed me with the perfect wife and family who have actively supported me in my drive to become the best.

Now that you know where l'm coming from, let's talk about the Dove 650. This airplane represents a composite of the best features of my previous airplanes and, of course, some borrowed ideas. The main theme in all of my airpranes has been simplicity and reliability, A competition airplane must sopport the flier, not be a burden to him.

For example at every contest I see fliers who can't get their engines started because their fancy cowl design prevents normal choking. How about the guys who spend 30 minutes changing an engine or fuel tank? The tank should be removable without disturbing the engine. Dove's engine or tank can be replaced and be ready to go again, befon your flying buddy has completed his flight (provided he doesn't crash!).

Time at the flying site or contest is precious, so build your airplane to be functional as the firm priority and pretty as the second...." 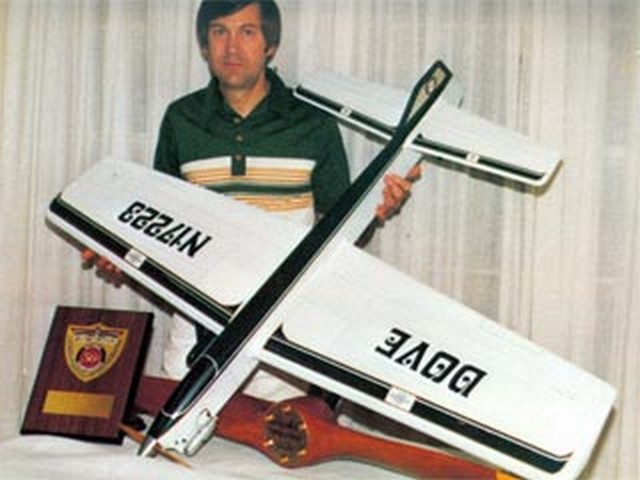