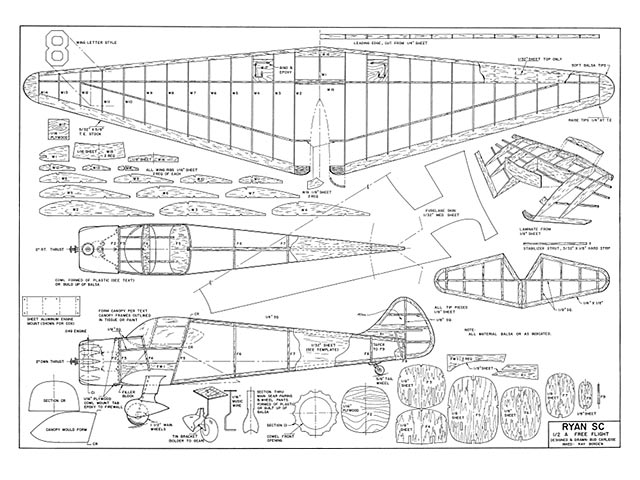 Quote: "In the 1930s this plane was way ahead of its comtemporaries in design and performance. Here is a fine flying FF scale version. Ryan SC, by Martin Carlidge.

Tired of the same old high wing sport models? I was. While paging through back issues of AAM looking for something different, I came across the fine article and three-views of the Ryan SC, so this fine-looking Sport Cabin aircraft of the mid 30's became my next project.

Although the Ryan SC has a few characteristics, such as extreme wing taper and small tail surfaces, which are not normally associated with good free flight performance, it was decided to give her a go anyway. The first test frights quickly dispel fears and once you become used to the higher flying speed (she definitely is no floater) and trim her accordingly, she will turn in some fine flights.

Construction. The fuselage is the most difficult part of the model, so let's start with it. Begin by cutting all the bulkheads from 1/8 medium balsa. Assemble formers F-5 thru F-9 on the 1/4 in sq upper and lower keels, being especially careful to insure correct alignment. Install FW-1 (2 each) and formers F-3 and F-4. Butt glue 1/32 sheet balsa together to form a piece large enough for the fuselage skin. Use the template on the plan to cut the skin to shape. This is oversize and will be trimmed after assembly.

Soak the skin in very hot water for about 10 minutes, Carefully position the skin on the top keel member and wrap around the frame, allowing it to overlap at the bottom keel Carefully pin and tape the skin in place and allow to dry. Trim the skin by cutting through the overlapping layers, leaving a good butt joint at the bottom aft fuselage and at the top, just forward of the cabin. Allow the skin to dry, then remove it from former and bulkhead assembly.

Apply cement to the former and bulkhead assembly from F-5 aft to F-9 and place inside the molded skin. Again use pins and tape to secure it. Avoid application of pressure between bulk-heads, as this causes sagging. Now the skin can be glued to the bulkheads forward of F-5, and when completely dry, trimmed to shape. Do not trim the skin at the wing attach area until fitting the wing assembly. Add the 1/16 plywood firewall, being sure to epoxy the nuts for the engine mount to the back side. Add the cowl mount tabs. Mount the engine as indicated on the drawings..." 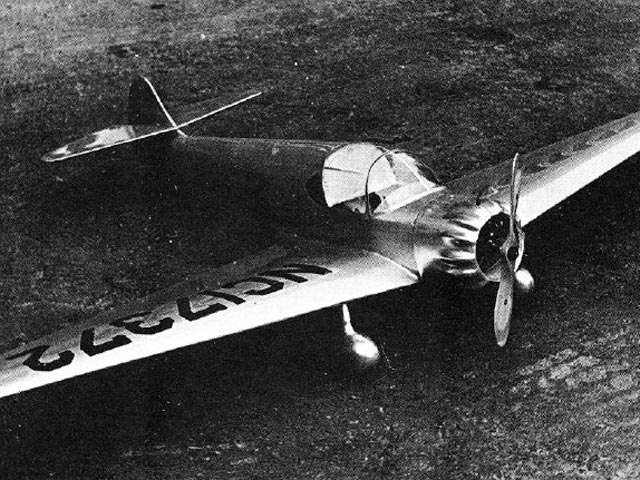