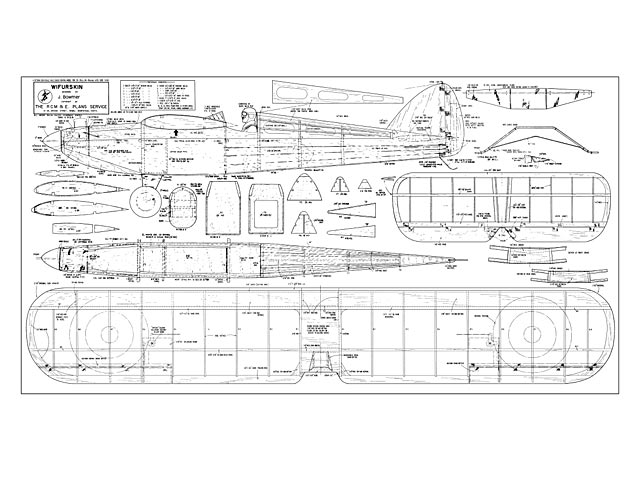 Quote: "THIS model owes its strange name to those magnificent RAF machines of the late 20's, the Wizard. Fury and Siskin. The Mk.I took its lines from the latter pair of aircraft, while the wing was mounted parasol in the manner of the Wizard. The result was a docile and extremely stable model, ideal for just stooging around the circuit, but with a persistent determination to return to the straight and level condition which strictly limited its acrobatic repertoire. After many pleasant hours of flying, the Mk.II was developed, retaining most of the old lines, but having a shoulder wing of reduced span, and this is the model presented here.

The acrobatic capabilities of this version are truly excellent, while the easy handling characteristics of the earlier model have been retained. If you are one of the chaps who longs to build a true scale model, but feel you do not have the skill or experience to tackle such a project at the moment, the Wifurskin should at least keep your appetite satisfied for the time being. For a very small amount of effort, you can recapture the atmosphere of the fighters of a nostalgic era, promising yourself that someday, anyhow, you really will get cracking on the scale model or your dreams. At least you will have taken one step in the right direction!

Radio installation will naturally depend on what you have available. The model was designed originally for 6 channel reeds, or rudder, elevator and engine, but can use anything from 2 to 10 channels, provided the radio installation does not exceed 16 oz or so. A .19 cuiin. engine is recommended, the OS 19 Max III being the designer's preference.

Construction is very straightforward, standard techniques being observed throughout. The wing is built in two halves, the 1/8 x 1/2 in strip being cemented to the rear of the LE before cutting the rib notches. The wing panels are joined by the centre-section structure. Trim the spars to match in the centre when the wing tips are propped up 2-1/2 in, cement one in sheet joiner to the front spars and one to the rear spars, and allow to set hard. It is then a simple matter to add the fill-in between the spars, the other 1/8 sheet joiners and the centre section LE and TE. Cover the centre section with 1/16 sheet, leaving access from below for the servo, if ailerons are to be used. Nylon covering for the wings is recommended.

There is nothing unusual about the fuselage. Finish the two side; complete. with I mm. ply doublers and the engine bearers (accuracy required here), then join using F2 and F3. Bind the tailskid to the tailpost and join up at the rear end (if you prefer a steerable tail wheel, use one of the commercial mountings). The 1/4 in sheet upper fuselage is carved after cementing in place. Lightly cement the front hatch in position for carving. A little effort to obtain a pleasing colour is worthwhile. The engine is mounted on 1/8 in paxolin, using countersunk bolts to prevent fouling the bearers. Nte 3° right and 3° down-thrust. Mark the circle presented by the spinner backplate before carving the nose contours.

The simulated stringers are added after covering the fuselage with silk or nylon. Knot one end of the twine, and pass through the fuselage from the inside, just forward of F3. Pencil in the line the twine is to follow, coat with Seccotine pull the twine tight and pin at the tail post. Smooth down with a wet finger. Sounds a lot of trouble, but in fact it only takes a minute or two, and the effect is very pleasing. The nose forward of F2 is covered with aluminium cooking foil to represent the sacred polished cowling!

When building the tailplane, ensure the centre ribs match up to the outside of the rear fuselage. Cover with nylon or silk, and cement in place. Add the lip, which is notched to go over the tailplane spars, then the yrin. sheet fairing pieces when set.

Form the dural UPC using the usual heating process, then bend the wire to match. Bind the wire in place with 22 swg tinned copper wire, and solder using a large iron. Fit wheels of relatively thin cross-section if possible, balloon types look rather out of place.

The original was finished in silver dope, with black top decking and standard RAF markings, and the whole model fuel-proofed. Squadron markings, and any other detail you may wish to add is up to you. American readers may well prefer the colourful decor of US Army interceptors of the period!

There is plenty of space for the radio gear, and the method of installation will depend largely on the type you are using. Servos may be mounted. on a tray, or on the sides or bottom of the fuselage. Take the aerial out either to the tip of the fin or tailplane.

Pilots who have been used to tricycle undercarriages will probably find take-off a little tricky at first. Be ready for a swing as the tail comes up, but be careful not to overcorrect, or you will soon scatter the crowd! After a little practice you will wonder what all the fuss was about! In all other respects, the handling is docile and relaxing, the moderately sized control surfaces making smoothness easy to achieve, yet giving sufficient power to achieve relatively advanced manoeuvres. We don't claim it will 'do the book', but we are sure you will get an awful lot of fun for very little effort with the wee Wifurskin."

Note see more pics 005 for a photo of the earlier parasol wing-mounted Wifurskin MkI design, as mentioned in the text. Photo was found in the 1963 Aeromodeller Annual (Round the Rallies section). 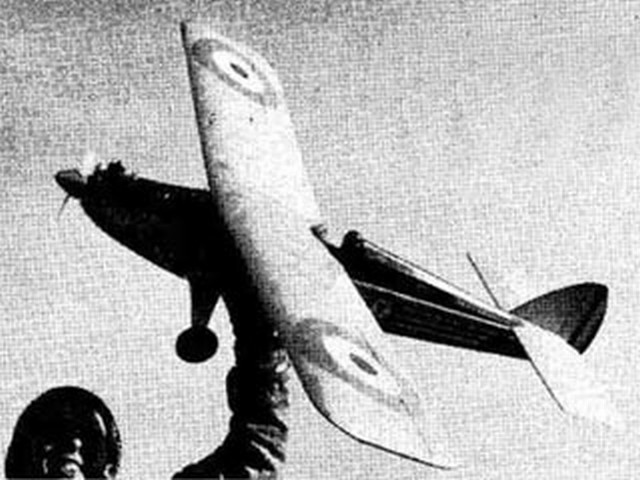