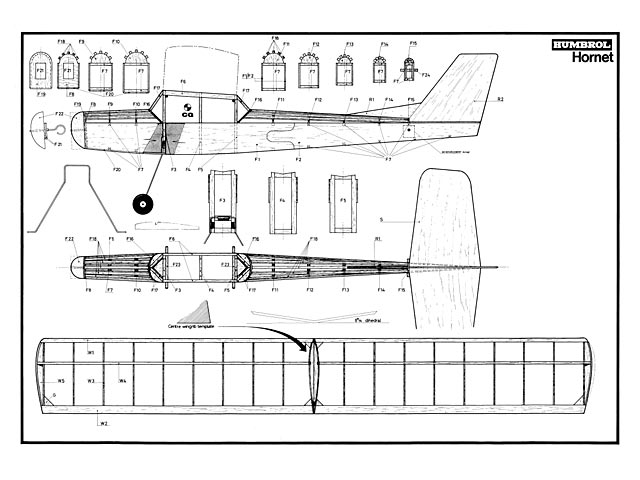 Humbrol Hornet from 1974. Free flight rubber power model. Wing span 760 mm. This model is stage 4 in the '5 Stages of Modelling' series from Humbrol.

Quote: "Hi Mary/Steve, yet another plan. Photo of kit box, scan of stickers/decals, plan tif & pdf all formers and ribs on it."

Quote: "Stage 4 is a built up cabin fuselage type 760mm rubber model which Paul is convinced ought to be Stage 5 - or even 6! Humbrol say it was included to 'challenge the skills of the de-veloping modelling enthusiast' and Hornet certainly did that for Paul. He found the fuselage construction a little difficult and when it came to fitting the noseblock he cemented it in place, simply because there was no instruction as to what he should have done. His pals were able to advise that the noseblock should plug-in and pull-out for winding the motor.

When making the wing, all went well until the dope pulled the trailing edge into a mountainous skyline effect. Perhaps Paul was over enthusiastic with the clear dope but a word of warning to reduce the shrinking effect by thinning the dope would not have been amiss.

In any case, Hornet was oblivious to all the concern for its strange and kinky wing. It flew perfectly and on up to 200 turns, even with the substi-tute rubber, it made very satisfying flights.

At four ounces, and approx 30in. span, it is an extremely tolerant design which reminds one of that ageless AM Cabin Duration (oz4190) model created by Bill Dean over 35 years back and still popular in APS. The formula is obviously a good one for instruction in built-up models and patience in flight trimming..."

Update 27/04/2021: Added kit instructions and printwood scan, thanks to AdrianCulf. 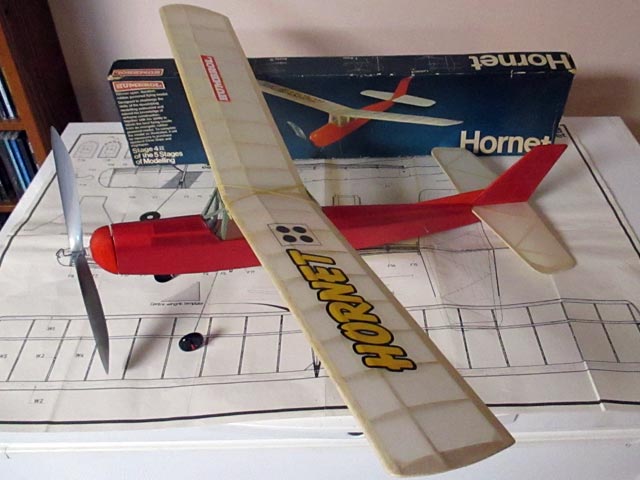 Hi here are 2 photos [see more pics 005, 006] of the Humbrol Hornet under construction, an electric free flight version. regards
starfighter - 26/10/2015
Hi Mary/ Steve, a photo of the just finished Humbrol Hornet for the page with the plan [see more pics 007]. We've been test flying it but there was lots of fog so almost lost it. Later it will be painted so now it's just plain for testing it. I upload these photos to a flikr site I have just for model airplanes https://www.flickr.com/photos/127362729@N08/ I hope to make a model airplane blog this winter and link to the same site my self.
Starfighter - 03/11/2015
Hi Steve /Mary- a photo of my Humbrol Hornet as is completed [more pics 008]. By now it made many fine flights in the summer days of low wind speeds. Regards.
Starfighter - 09/09/2016
Dear Mary, Here's a couple of photos of my Humbrol Hornet for rubber power: oz7137 [main pic, 009]. It's a really great flyer. I made a few modifications for my model: Built-up tail surfaces; moved the rear peg forward; 8" Peck prop (should have made the undercarriage legs longer!); only 3 stringers in the fuselage top with sheet fill-in at the nose. I did not require any ballast for correct CG placement.
Adrian Culf - 05/04/2021
Add a comment