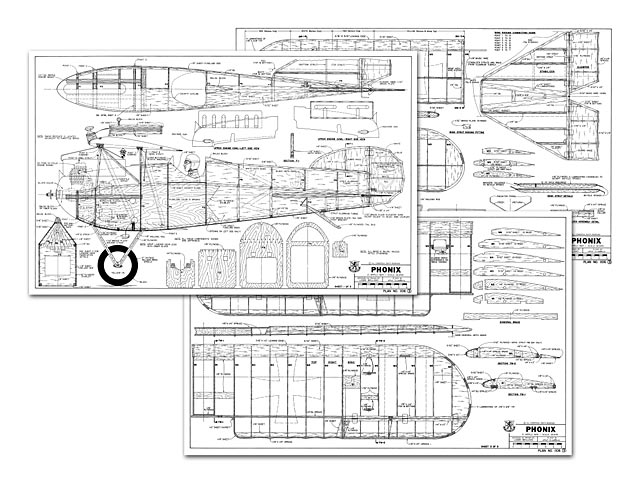 Quote: "A beautiful model of an unusual WWI biplane. Phonix by Laddie Mikulasko.

About 25 years ago, I had the chance to purchase a Profile Publication booklet from England. Each book depicts one aircraft type in relative detail. What was great about them was the color documentation. One of the aircraft which caught my eye was this colorful biplane from WWI, called the Phonix.

The company which built this plane was situated in Vienna and was set up to be a supplier of aircraft to the Austro-Hungarian Empire. An interesting side note is that the designer of this plane was Ernest Heinkel, who later designed his own line of aircraft in Germany.

The plane saw limited action in WWI, over Italy. A number of them were sold to the Swedish Air Force. The scale model presented here is of a plane which was forced to land in Italy in 1919. The model is in 1:5.8 scale, with accurate scale outline throughout, using the Profile Publications 3-views as reference.

This model is not for absolute beginners. It is not difficult to build, but there are just enough little things to discourage beginners. I will describe the more involved steps, only.

Construction. Wings: Start by building the top wing first. Cut out all of the ribs. The top wing is built in two halves, to be joined on the centerline later. Build right on top of the plan, one panel at a time. Pin the 1/16 trailing edge sheeting and individual ribs to the building board. Slide the bottom 1/8 x 1/4 main spar and 1/4 x 1/4 rear spar into the ribs. Glue all of the ribs to them and to the trailing edge, Glue the top main spar..." 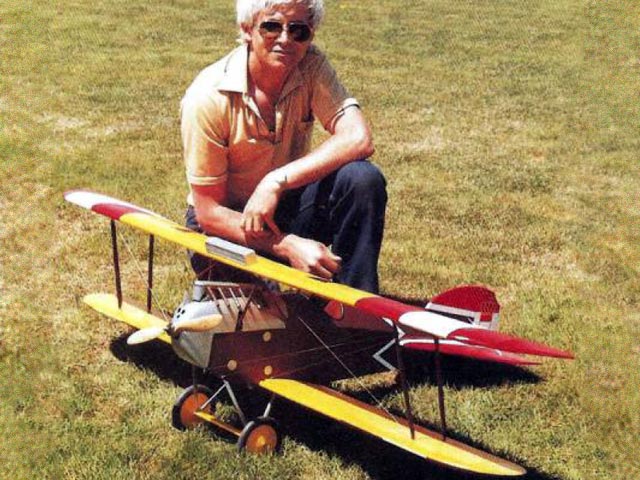 An intriguing aircraft from the First World War…the Austro-Hungarian Phonix D.2 KuK Imperial Kriegsmarine 1918. I first constructed a version of this aircraft way back in 1971, as an 18” wingspan control line model, a D-III, complete with operable ailerons [pics 003-005]. The next version (2018) was also of 18” wingspan, a D-II this time, rubber powered…and greatly influenced by Outerzone’s plan (oz7132) as well as a rather nice 3-view drawing [pics 006-009]. Whichever version and however large one chooses to model, this subject has simple lines, and great performance…well worth modeling. The plan is a starting point, a tool to create. Thank you so much, Steve and Mary.
Neal Green - 11/02/2021
Honestly, I had to read the text to find the first model was a smaller version and not the original 66" size, my eyes were fooled. Nice propeller job in each, with a fine transition from the round hub outwards, the tail shield is a pretty work as well, especially on the earlier model. I suppose your spider was not on hand for the second model, she wasn't there to help you with the rigging :-)
Miguel - 12/02/2021
I truly enjoy modeling aircraft of World War One vintage. They are generally so boxy in nature and of simple construction that I often times find myself using a good (high resolution) 3-view as a plan to work from.
My first Phonix was eye-balled and hand-drawn for the simple reason that to my knowledge no plan existed, certainly no kit, and Outerzone wasn’t there to help me out. It was of course, a control line model and very hot…could stunt excellently. It’s only shortcoming was that short nose moment…had a tendency to ground-loop on landings every time.
The second version, literally 41 years later, involved considerable research into the actual aircraft, use of the ideas presented in the Outerzone plan, skills gained over many decades, and last but not least, an excellent 3-view drawing enlarged to model’s actual size (I do love working from good 3-view drawings). Propeller is carved and for display only. My real area of focus was the model’s nose-block and Hiero engine. As for rigging…I’m old…patience isn’t what it used to be…but if I’m ever want for something to do…. The model is unique and a real joy to construct.
Neal - 12/02/2021
Neal, always delighted with your craftsmanship and presentation. I've found the Phonix an attractive subject, as well.
Several years ago I started working up a plan for a D.III in Peanut scale, also from a 3-view I had come across. That plan is now buried somewhere on my drafting table among the many other projects I've never completed. Nice to see that you actually brought yours to such wonderful realization. Another, similar, aircraft I've had my eye on for some time is the UFAG C.I. Maybe someday . . .
Jan Novick - 12/02/2021
Thanks, Jan...we've been looking at the same aircraft. There's just something about the UFAG C.1 fuselage shape that really catches my attention. Another aircraft with a similar setup, the Hansa-Brandenburg W29 is also very unique. Another interesting model would be from the Joe Ott/Ace Whitman plan, Sea Hornet (oz8899).
A peanut Phonix DIII sounds delightful...get going. Again, thanks Jan. :-)
Neal - 13/02/2021
Be careful! The Brand. W.29 has the rudder in the wrong place and the pilot of the UFAC C.1 had to climb over the engine to see if anything interesting went ahead! I never understood why Austrian-Hungarian aircraft designers believed pilots should be kept in ignorance, I suppose the more aircraft crashed they more they could sell in replacement.
Miguel - 13/02/2021
Besides the W.29, I think its antecedent, the W.12, would make an exceedingly challenging project. Then there's the HB D.I, with its diagonal inter-plane struts, to really put one's teeth on edge! So many rare, enticing and seldom modeled aircraft. Such things as dreams are made on.
Jan Novick - 13/02/2021
As a note of reference: plans for the Hansa-Brandenburg W.29 are currently represented on OZ as the Brandenburg Sea Monoplane (oz1671).
Jan Novick - 13/02/2021
Miguel, the forward view was no worse than any other inline power plant of the same era. Compare the Pfalz and Albatros engine installations which also had the top of the cylinders in front of the pilot. You also have to remember that it was only the tops of the cylinders, which were considerably narrower than the whole engine - in any front view they occupied less than a quarter of the fuselage width.
Daithi - 14/02/2021
Who gets the credit for the nice images posted above (003,004,005)? I recognize the location as the NE ramp of the long gone, much loved "Coronado Airport" in Albuquerque!
Dave D - 14/02/2021
Right you are, Dave...Albquerque, NMex...a long time ago in a land far away, etc. I was not long back from sunny VNam and trying to reclaim some of my lost youth. Check out the pics of my Sopwith Camel (oz4446), same location. Thanks.
Neal - 14/02/2021
Hi Daithi, long time no wag-chin! Yes, the straight-ahead line of sight of this wasn't much worse than most of its other inline engine powered cousins, especially those with all cylinders in a single row. What I meant however is this visibility impediment taken a few notches up. See for example the Brandenburg C,1 or the others and please tell me if this pilot can see ahead more than a steam locomotive driver :-)
http://aviadejavu.ru/Images6/MM/MM-151/1014-16-1-4.jpg
http://aviadejavu.ru/Images6/MM/MM-151/1014-16-2-2.jpg
https://c8.alamy.com/comp/F2F4PP/hansa-brandenburg-kd-1916-nowarra-photo-F2F4PP.jpg
I'm sure you'll believe I have better and more egregious examples but they are in things called books, not online. Cheers!
Miguel - 14/02/2021
Add a comment