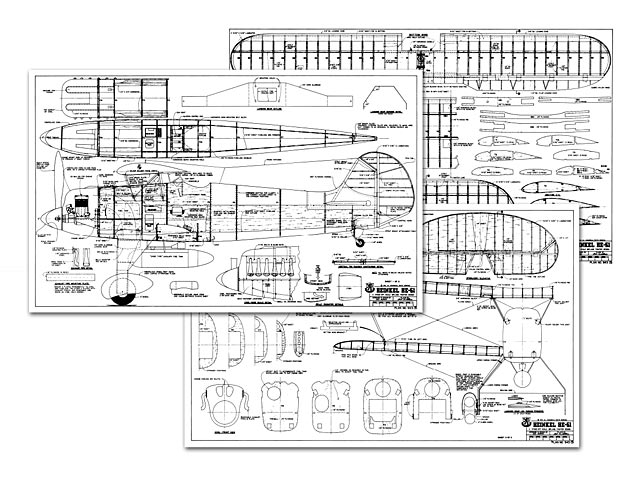 Quote: "This beautiful 1 /6 Stand-Off Scale bipe by Dick Murray can be a satisfying reward in both building and flying the finished product.

The Luftwaffe was first publically announced in 1936 and the HE 51 equipped many of its early fighter squadrons. JG132 'Richthofen' sqn was based in Doberitz at that time and provides the color scheme used on the subject. The HE 51 was used operationally in Poland in September 1939 in a close support role and served as an advanced trainer until 1943. Prior to this they were used extensively in the Spanish Civil War by the Condor Legion as a fighter along with the Fiat CR32, until the arrival of Russian 1-15 biplanes and 1-16 monoplanes on the Republican side in November 1936.

The HE 51 units soon found themselves outclassed and were relegated to ground attack duties which they performed successfully throughout the war. They are said to be the forerunners of the Stuka units used so successfully early in the Blitzkrieg, but it is difficult to believe they used similar tactics in weapon delivery. The romance of 'Two wings and round engines' led me to a search for a subject which would fly well as a model because it had all the right parameters to fly well as a full sized machine. After eliminating those that had often been done, like the beautiful Curtiss biplanes of the 1930s and most of the WW I types, I narrowed it down to a few like the HS123 and the Fiat CR42. I finally decided on the HE 51, a true sesquiplane, because it has the nicest lines of any, plus several attractive color schemes from which to choose, as well as distinctive features like those trumpet exhausts and full span flaps on the lower wing, and a drop tank.

transport it in a normal sized car. The 72 in top wing and 56 in fuselage do not require me to pay off the mortgage of my friendly van dealer. This worked out to a 90 sized model but I chose to go with a geared Webra 60 so I could swing a larger slower turning prop for more scale like performance. The only sacrifice would be a high top speed which this model should not have as 203 mph was the top speed of the real thing.

The only departure from scale I couldn't get away from was the cutouts in the front of the cowl and, as it is, there are no outlets in the cowl for escaping cooling air, this is ducted through the firewall and out through the radiator in the fuselage bottom. This radiator is a venturi and'is quite effective. The engine head itself has soft aluminum baffles wired to it to direct all the air to the right place. The tail wheel is scale although only on later examples and the wheel pants can be left off as they were often removed for winter operations.

Actual construction is straightforward with nothing unusual except perhaps the cooling duct which is just a piece of 2 in shop vacuum tubing connecting the radiator to the firewall. This necessitates offsetting the fuel tank, but there is ample room. The fuselage is just a box with 3/32 sides reinforced with 1/16 ply and constructed in a jig. The bulkheads are 1/8 balsa except those in the nose area where strength is required for the undercarriage and cabane struts and in the tail where the tail wheel strut is attached. The horizontal stringers are 3/16 sq and set in diamond fashion rather than flat..."

Quote: "Hi Steve, Not the best quality I'm afraid, I've been looking for this plan for a couple of years after having been caught out by the RCM plans scam. Perhaps it will jog someones memory and they may have a better version. Cheers," 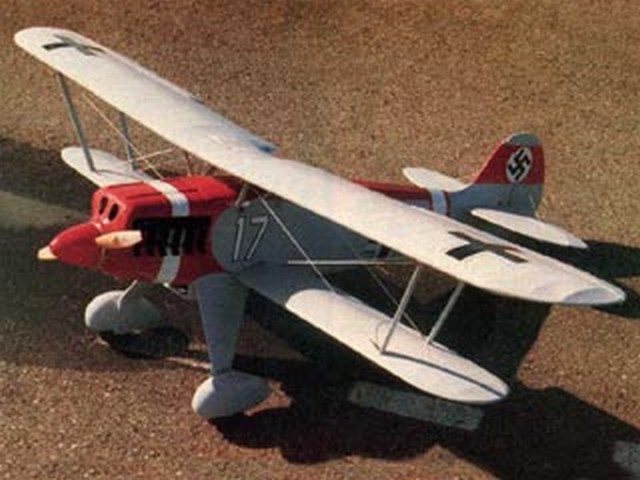