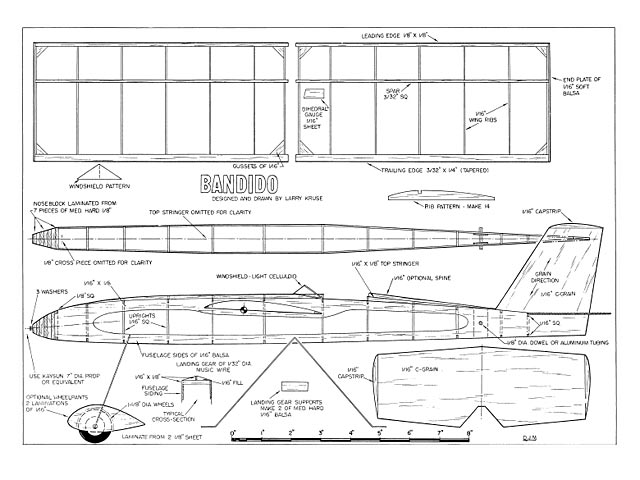 Quote: "A Sport Rubber design rebuilt from memories of the good old days and some great Berkeley creations. The Bandido, by Larry Kruse

Each fall after the Nationals, I undergo a transitional period between the end of flying season and the beginning of building season - a time spent in leisure by lofting gliders and small rubber-powered jobs into cool twilight air and watching them flutter to earth like the leaves they land among.

The last year or so my two older daughters have been helping me in this Indian summer endeavor, since they're now both big enough to enjoy the wonder of flight. However, along with the enjoyment. they've become more demanding in terms of the way the airplane looks and performs. Where previously they were happy with a stick model like a Sig Cub, this year they insisted that their airplane should 'have a place for people to ride,' and 'have a pointy nose.' Not feeling up to sparring with a vocal four year old and a six year old whose mind is made up, I sat down at the kitchen table one Sunday, and with their guidance, sketched until the plane looked like they wanted it to look, being sure to include a place for people to ride and a pointy nose.

The resultant Bandido is as much a product of my own first fascination with flight as it is a product of my daughters' wishes. As a boy, among the first airplanes I ever built which truly flew were three little rubber-powered cuties kitted by the long-since defunct Berkeley organization, the master modeling company of the 1950's. The three planes, as I now recall, were originally kitted individually as the Dragon (oz336), a snappy-looking biplane; the V-16 (oz337), a V-tailed miniature speedster; and the Bandit (oz333), either a shoulder wing or a Low wing (I can't recall which) with a low thrust line in relation to the total fuselage height. Later on in Berkeley's career, the three planes were all boxed up together and sold as Triple Treats, which indeed they were.

These three designs (were they Henry Struck's?) gave me such pleasure, that memory greatly influenced the design of the Bandido, employing as nearly as recall would permit the same fuselage structural techniqles, a built-up wing, and sheet empennage that the originals had (Editor's note: Don't blame Henry Larry, I designed all three. My Bandit (oz332) first appeared in October, 1949 Flying Models as a 28 in sport design, photo herewith. Later it was kitted by Berkeley, about 26 size with a structure quite similar to what you remember here. I currently have an R/C version in mind - Don McGovern)

Basic fuselage construction can begin by tracing the sheet sides from the plan and carefully locating the notches for the wing spar, leading and trailing edges. The vertical uprights are 1/16 sq and should be glued in place before the fuselage hori-zontal members are added. The 1/4 sq horizontal nose pieces can then be glued in place, the tail pulled together, and the other 1/16 x 1/8 horizontal pieces added.

The landing gear wire and support blocks and the nose block can both be fabricated while the fuselage dries. Both should be trail fit and trimmed as needed. The nose block should be faced with bushings on the front and back side after the prop shaft hole is drilled. The hole is drilled with 3° downthrust and 4° right thrust to counteract propellor torque. The landing gear can be epoxied in place, noting that it is slanted forward slightly for better shook absorption..." 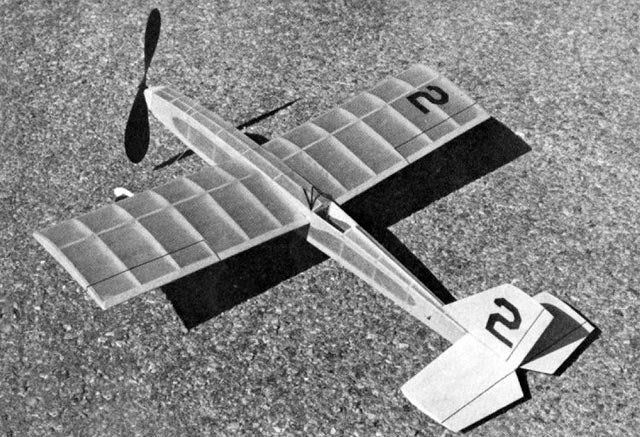 Here are some pictures of my Bandido that I just completed [more pics 003, 004]. I really love your website, I have two more planes in progress, will send more pictures soon.
DonavanDailing - 10/03/2017
Add a comment