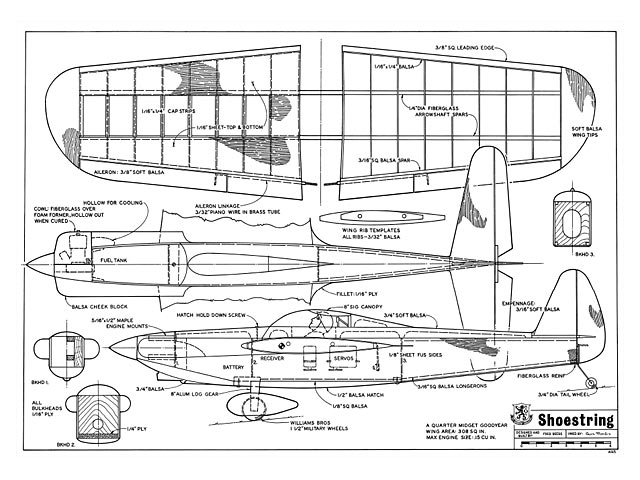 The Shoestring design is based on the wing concept by Don Dombrowksi of using two fiberglass arrow shafts for both structural strength and as the wing builiding jig. As you know, building a lightweight, thin, tapered wing that is straight, can be difficult. Sheeted foam is not foolproof and is much heavier than our built-up wing. Don's experience with Formula I wing design gave us the symmetrical laminar wing root section but it took 3 wings to decide on the tip airfoil. After trying some thinner sections, the 2410 was selected for its high lift and low stall speed characteristics.

The result is a wing that will not snap out of a tight turn, yet has very little drag for top speed potential. Landings are not difficult as the plane can be slowed down without fear of stalling. Another advantage of this wing design is non-sensitive aileron control, especially around neutral. This means smoother flying and fewer course corrections and the resultant loss of speed.

The long nose and tail moments allow plenty of room for the fuel tank and the battery pack and result in less sensitive elevator control when combined wiith the forward CG location. In fact, the airplane takes a little time to get used to at first because it is less sensitive than most pattern ships, yet it flies much faster.

Construction goes very quicly once the basic parts are cut out, but some time and care must be taken to get the wing ribs and the shaft holes accurately aligned.

Begin by making 1/16 in plywood root and tip rib templates with the 1/4 in holes for the arrow shafts..."

Article pages, text and pics, thanks to JHatton. 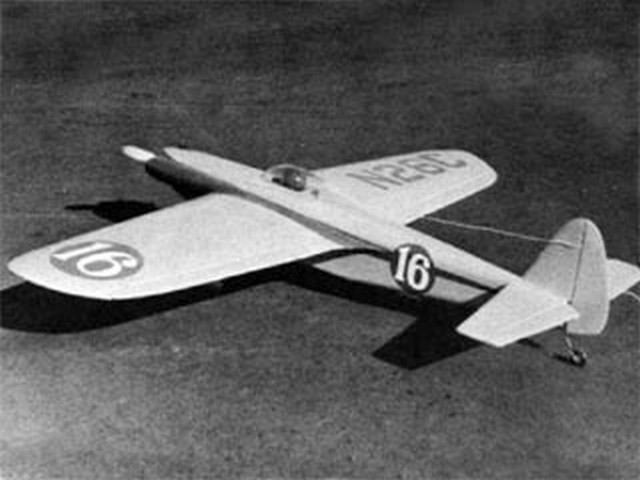