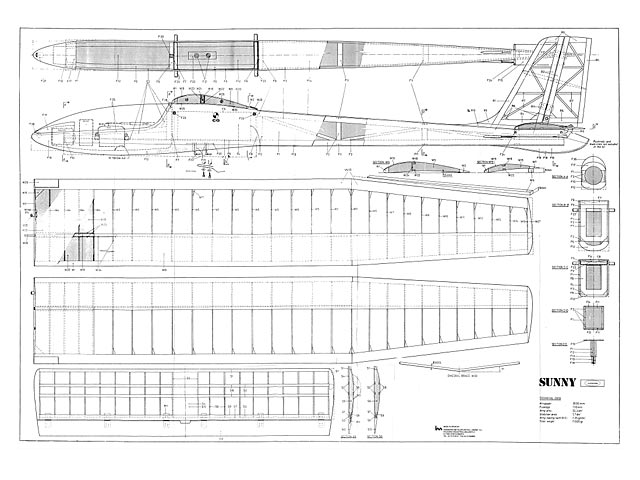 Quote: "Refined by many years of field-tested improvements, the Sunny can be used as a rudder-only slope-soarer or as a power-assisted glider when equipped with its power-pod."

Quote: "Hi Steve, the SUNNY by SVENSON, a 2 meter glider. This is a second implementation of the Azizo. Personally, I prefer the Azizo. The wing of the SUNNY is heavier than the Azizo. The SUNNY was a success in the '80s."

Quote: "Hi I have made a scan of the wing ribs from this glider since they are not all shown on the plan I am sure they are of use to those wishing to build it from the plan on Outerzone. Thanks and regards," 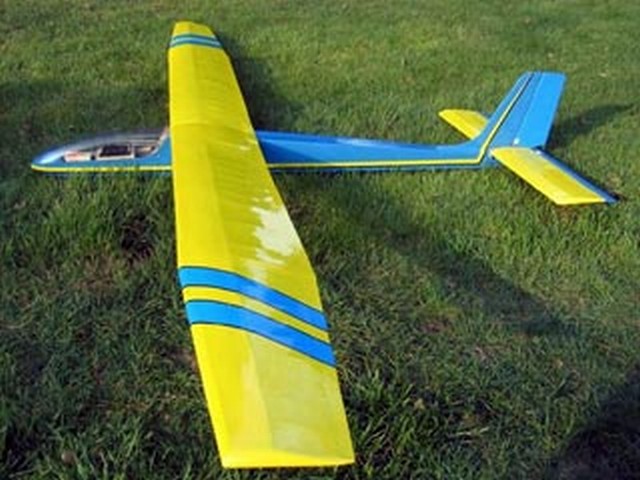 Photo submitted [see more pics 003].
SalvatoreAlessandrino - 13/10/2015
Here are 2 photos of a Svenson Sunny glider I just built [more pics 004, 005]. I used a part build kit, took only a couple of evening hours in about a week.
Joost - 30/10/2017
As promised, photos of the just finished Svenson Sunny glider [more pics 006, 007]. I wanted to make them out doors and not on the workshop floor, so I have test flown it today. It flies well too. I spent an hour flying slowly, getting my hands cold, thinking it was not that long ago summer was here.
Joost - 03/11/2017
My SVENSON SUNNY was built from a kit in 1978 [more pics 008-011]. It had a pylon mounted COX .09 engine. I flew it intensively for nearly 10 years. It had to endure a lot of misuse and abuse but it somehow survived. Too many repairs and damage caused by oil in the exhaust of the COX engine weakened the plane and it ended up in the basement for the next 30 years. During last winter I took it completely apart, cleaned and repaired it. A lot of parts are new, but I tried to keep it as original as possible. I made a new engine pylon, but this time for an electric engine. It made its second 'first flight' some weeks ago and it flies very well. Many thanks for Outerzone!!!
Peter - 27/09/2018
I have built another SUNNY by SVENSON [more pics 012]. It was my first RC glider in 1977, I built it again with pleasure. I used the AZIZO oz6976 wings. The wings of AZIZO are the same size but still better by construction. The hull of the SUNNY is better than the hull of the AZIZO. The nose is longer, so there should be no lead ballast in the nose. This glider is in fact the best AZIZO or SUNNY. All errors of SUNNY and AZIZO have been resolved.
JulienVermeire - 04/04/2019
This is the kit of the SUNNY by the Spanish factory [more pics 012]. In 1983 the Belgian Svenson factory went bankrupt. For a few more years in Spain these Belgian construction boxes were still made.
JulienVermeire_Belgium - 24/04/2019
Add a comment