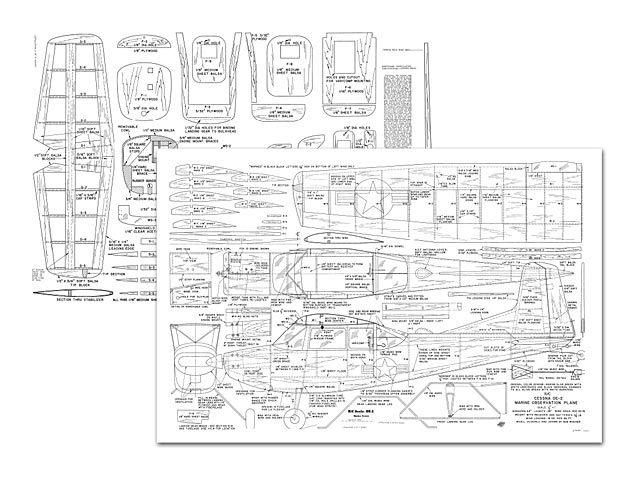 Quote: "Ever watch the crowd gather when an R/C scale job is about to be flown? There's something powerfully attractive about the sight of a model of a real plane skimming lightly down the runway, taking off and returning overhead looking every bit like the full size aircraft. This kind of satisfaction is the scale modeler's reward for the time and effort spent in careful building, finishing and trimming. But his painstaking struggle is wasted if he chooses a plane of such design that it can be flown only by an expert.

Any of the single-engine Cessnas will fly well as a model; the Cessna A was a favorite for rubber power 30 years ago, and today's descendants will perform as well in R/C. They have all the natural stability of a well proportioned high-wing cabin monoplane, requiring only a minimum of modification to produce a plane capable of flying with the best of the specialized R/C types.

Our Cessna has had its stabilizer span increased by 2 inches for greater stability, and the wing airfoil changed from NACA 2412 to 2415 to permit slower flight and help carry the R/C load. The downthrust shown on the plan is identical with that of the real plane; only side thrust had to be added. Dihedral was increased only slightly. The force set-up evolved agrees closely with that of a high performance R/C airplane. To be certain of a good flying plane, the builder needs only to keep the weight down to a reasonable figure by careful slection of balsa, especially behind the wing. Like most scale models it is almost impossible to build one nose heavy, therefore use the lightest balsa available in the tail section and the heavy block construction in the nose.

The question of whether to apply a super-finish is the scale builder's dilemma. Of the two OE-2 planes built by the writer, one has a fancy finish with 14 coats built up into a thick layer of smooth glossy dope. The other has a less velvety finish of 8 coats but is 12 ounces lighter and consequently flies much better. Possibly a compromise would be the answer since the lighter plane has a wing loading of only 19 ounces per square foot.

One consideration that could influence the builder's decision is the ease of patching a thin finish; and the often-flown light- weight plane is more vulnerable to damage because it makes more landings. A common sight at contests is the beautifully finished model which the owner is reluctant to fly because he does not wish to damage the product of many hours of labor and representing quite an outlay in cash. These models often weigh so much that a high speed is required to get them airborne and the end result is a mighty splat when they make contact with the unyielding earth. For more fun flying and less work patching, keep the weight down.

Contest judges are not always in agreement on the matter of finish. Some will insist that a military plane like the OE-2 should have a dull finish same as the prototype and will penalize the builder who shows up with a gloss. Others are completely taken in by the glitter and will give the prize to a plane so heavy with finish that it will barely fly.

If the builder plans to enter his OE-2 in contests he will be obliged to furnish proof of authenticity. By far the best source in this case is his file of American Modelers where he will find the well executed scale presentation by Walter Jefferies in the Feb 1957 issue. This drawing was repeated in the 1957/1958 issue of Air Progress. A larger but less detailed drawing was obtained from Cessna Aircraft Co of Wichita, Kansas. For photos of the real plane see the Winter 1960 edition of Air Progress or write to Aviation Photo Exchange, Box 75084, Los Angeles 5, Calif. The writer's OE-2 has been entered in a number of contests and has collected its share of prizes, including two first places.

Flying the OE-2 requires no special skill or experience as it is a very forgiving airplane if properly balanced. Since the batteries and receiver cannot be moved very far fore and aft, they are not much help as ballast. Very likely the model will be slightly tail heavy when balanced at the point shown on the plan, and some compensation will have to be made in the form of weights added in the nose. When the plane is viewed head-on a deep pocket will be seen just to the right of the engine crankcase and this is a handy place to add weights. About 2 ounces of solder is used in the writer's plane and this is held in place by surrounding it with modelling clay. Weight should be added to obtain a flat glide..."

Update 28/11/2019: Replaced this plan with a clearer copy (scanned from fullsize) thanks to dfritzke. Note this also includes some additional construction instructions, on sheet 2. 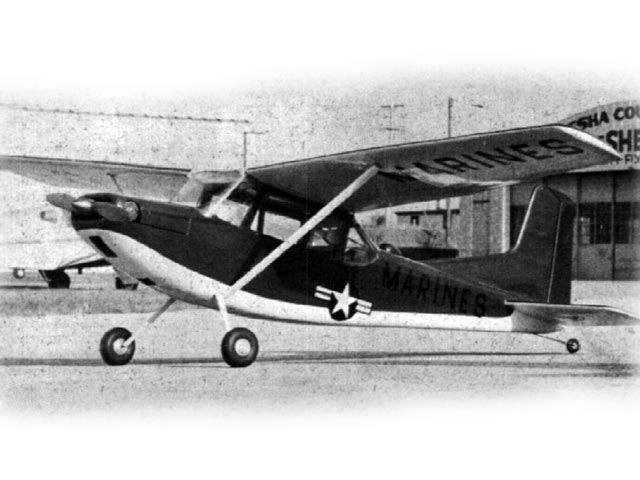