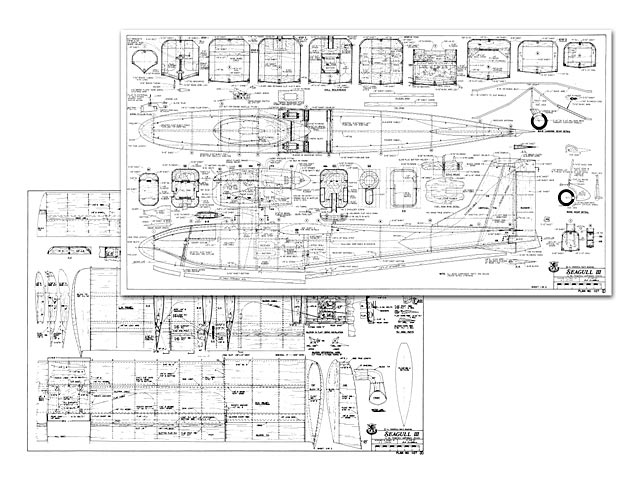 Quote: "The Seagull III is a flying boat that may be converted for land flying by the easy addition of tricycle landing gear. Its basic hull and aerodynamic design have been discussed in this author's series on 'Hull and Float Design' which were published in RCM (Feb - April, 1991).

Its performance has exceeded its designer's expectations. Its low drag and the power of the 0.S. Max .46SF engine are contributing factors. Take-offs from both land and water, with the big slotted flaps half extended, are under 25 feet. It is highly acrobatic; the NASA droop and RAO slots permit very slow flight. With flaps fully extended, engine idling, and with up-elevator holding it at a high angle of attack, aileron control is still effective.

The model's top speed is estimated at 75 mph, and in the slow flight configuration, described above, 20 to 25 mph. Because of its low drag, landings can consume a considerable distance as the plane floats in ground effect. Full flap extension is almost mandatory; and permits steep, relatively slow approaches.

With its high thrust line and low center of drag, them was serious potential for marked trim changes, with changes in engine rpm's. By judicious use of the prop slipstream, this problem was overcome, and it exhibits no pitch variation with power changes. A surprise bonus was the absence of either nose-up or nose-down pitching when the flaps are extended. Both these factors add to the enjoyment of flying the Seagull III.

The model has been thoroughly flight tested, both on land and water, by four friends (and fellow club members), and all very capable pilots. They have enjoyed its performance. Its water behavior is excellent. Spray is well controlled; it gets on the step quickly without spray hitting the prop. It weathercocks into the wind and the water rudder is effective. The steerable nosewheel permits easy ground maneuvering. The landing gear has proven rugged against the abuse of hard landings.

During the first two or three flight tests. some very unusual behavior became apparent. Coming out of a level left-hand turn, the model continued into an uncommanded right-hand turn, accompanied by nosing down moderately. This surprising behavior was easily controlled by left aileron and up-elevator, but it was annoying; particularly when the model performed so well otherwise. During these early flights, a Graupner 11 x 8 pusher prop was installed. It is an excellent prop, but heavy. At 1-1/2 oz, it is double the weight of a wooden equivalent.

Theorizing that the cause of this aberration might be 'Gyroscopic Precession', exaggerated by the high thrust line, the prop was changed to a Zinger 11 x 8 wooden pusher prop, weighing 3/4 oz. Subsequent test flights confirmed the theory. The unusual behavior disappeared. While use of wooden props for water flying is not recommended due to spray damage, the location of Seagull III's prop, over the wing and 'clean running' hull, result in the absence of spray impingement on the prop.

The control surfaces are all mass balanced at their hinge lines to suppress flutter. This model achieves very high speed in a dive. This author is addicted to inverted and fully cowled engines and mufflers. Exposed, these increase - and probably double - the model's total drag, and are ugly!

Construction of Seagull III is based on the stressed skin concept of locating material as far from the neutral axis as possible for maximum strength with minimum weight. The internal structure is relatively simple and all surfaces are sheet balsa, covered in MonoKote, resulting in a warp free, rugged model. The drawings are very detailed, so many component parts are not difficult to make.

What follows addresses the sequence of sub-assemblies and assemblies for each component leading to final assembly - along with engine starting and flying.

Hull. Assemble the hull bulkheads. Install all the internal nose wheel hardware to Bulkhead #2. Along with the 1/4 triangular bracing. The receiver switch is assembled to Bulkhead #5. The double walled portion of Bulkhead #7 forms the socket retaining the main landing gear legs. Note the triangular bracing. The hull sides and all bulkheads should be jig assembled for accuracy. Install cable sheaths for elevator and rudder..." 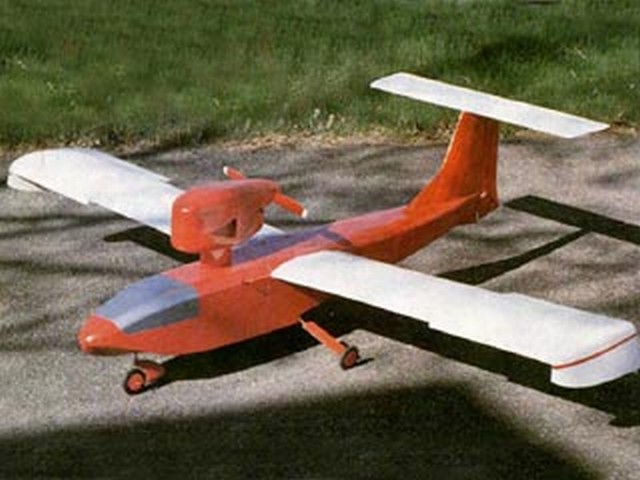