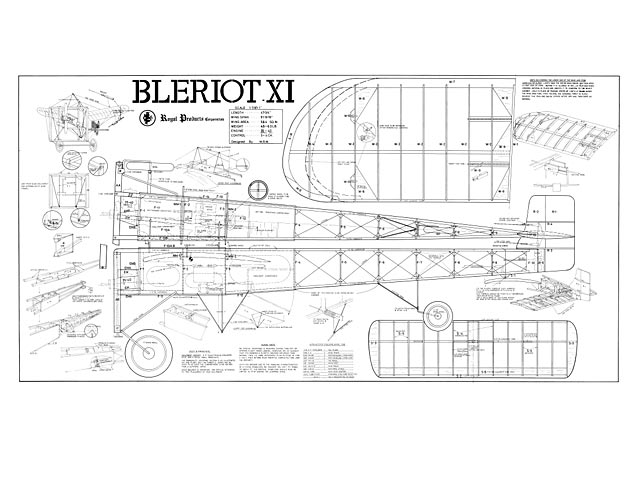 Quote: "Louis Bleriot, a thirty seven year old Frenchman with a large red moustache, achieved ageless fame by piloting a monoplane across the width of the 22 mile English Channel before anyone else. It is with great respect and awe that this writer (a 37 year old American) presents these instructions to accompany a model kit of this famous aviator's airplane. In an age of biplanes and relatively little knowledge of aviation, this famous Frenchman set many world records and piloted his monoplane to win the first london Daily Mail newspaper prize.

The fuselage was a mere 25 feet long from prop to tail and the wings, with a 28 foot span, were covered with an opaque material like vellum which appeared both light and fragile. A three-cylinder, 25 horsepower Anzani engine with a two-bladed wooden prop sped the tiny plane along at 36 miles per hour. The total weight was 484 pounds without the pilot.

On Sunday, July 25, 1909, Louis Bleriot took off from Calais, France at 4:35 am and flew at altitudes up to a dizzying 250 feet to cross the English Channel in 37 minutes. He arrived on English soil near Dover Castle and crash landed from a 65 foot three turn spin.

There is no way to do this great person justice with such a resume, so please take the time to read a thrilling account of his flight in a book which is entitled Famous First Flights That Changed History by Lowell Thomas and Lowell Thomas Jr. This book also has an excellent front quarter view of the Bleriot XI which shows the rigging detail and prop shape. There is also an excellent inflight photo of the right side. From these pictures it is evident that the Bleriot XI used a skid instead of a tail wheel which will save precious weight if used on the model.

There are many, many books and other sources of information about this plane made famous by Louis Bleriot. Let me once again encourage you to seek out the pictures and story so that you may fully appreciate what these hearty pioneers have done so that we may now fly with ease.

Constructing the Bleriot XI: Before gluing any 'sticks' together, let's consider a basic law of physics. Notice the small circle on the sideview of the fuselage which is divided into quarters two of which are colored blue). That symbol represents the center of gravity (CG) and it is the same as a balance point on a teeter-totter. When you were a kid do you remember what you had to do when a grown up was on the other end of the board? Heavy load had the short end, right? The same rule applies here - you must make a heavy nose and light tail for this plane. It is only 9 in to the prop and four times that far to the tail! Therefore, every ounce you save in tail weight is four ounces less weight you have to add to the nose for balance. Do not be so foolish as to try flying this plane without balancing it right or you may reap a kit in return!

Now before you glue anything, lay out all the parts and sand every wood item as much as you dare. Then sand it one more time. Now begin assembly by gluing R-1 to R-2, holding both in place with tape. Then glue the R-3's, R-4's and R-5's in place as shown in the drawing below the rudder side view. Cover the stabilizer plan with waxed paper and then mark and notch the S-2 trailing edge for the ribs. Pin it in place. Glue S-6 in place against the S-2 and then make sure the spar (S-3) is located correctly. Glue all the ribs in place as shown.

Next, add the hardwood dowel leading edge and when dry remove from the plans and add the tips (S-3) and the center section planking. There are no clear details on exactly how to attach the stabilizer to the fuselage, however, it doesn't require much imagination to realize this is a critical point. Cut a slight notch in the S-1 blocks to receive the elevator horn bearings which are to be epoxied in place after securely wrapping with unwaxed dental floss or nylon thread. When dry, secure the elevator horn to the stab frame, wrapping with thread and gluing it in place. Be sure the S-1's freely rotate after horn is in place. Notice the 1/16 wire brace (shown in side view) which runs from the elevator spar tubes to the top fuselage longerons. Insure this does not hamper stab movement after installation. When fuselage is ready for final assembly, the S-1's will be spot glued in place, carefully wrapped and epdxied securely on the bottom fuselage longerons.

The wings will be constructed as shown in the isometric drawings on upper right hand corner of the plans. Begin by cutting W-8 braces from the sheet provided and insure the grain is parallel to lines shown on plans. Notch the W-7 trailing edges to accept ribs and pin in place over wax paper covered plans. Glue W-5 and W-6 in place as shown. Use small scrap balsa blocks to hold the in spar in place and then add all ribs as shown except the W-2 closest to W-1. This rib will be added after the W-9's are in place as it must be trimmed to fit. The W-9's are cut to receive tubing which will slide over wires fastened into the fuselage. Take additional care to insure these pieces fit now to avoid trouble later. Finally, add the leading edge dowels, W-8 braces and W-10 fitting blocks as shown. When dry, remove wing from plan and build a mirror image for the opposite wing. When installing W-9 blocks, align the previously built wing with wires installed in place) as it will be on the model to insure proper wing wire pin alignment. When dry, remove both wing panels and finish sanding to shape... " 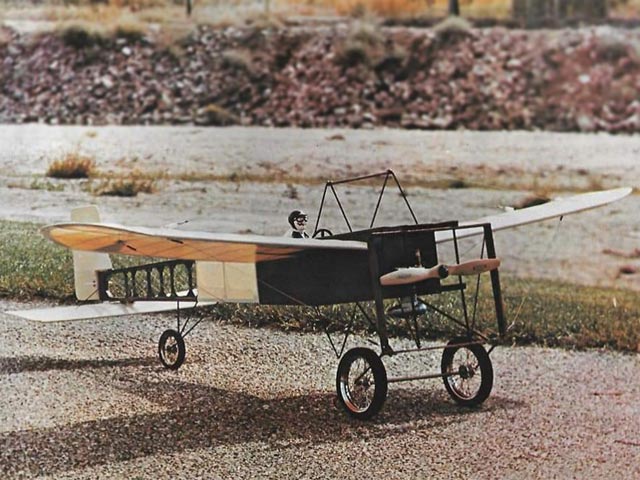