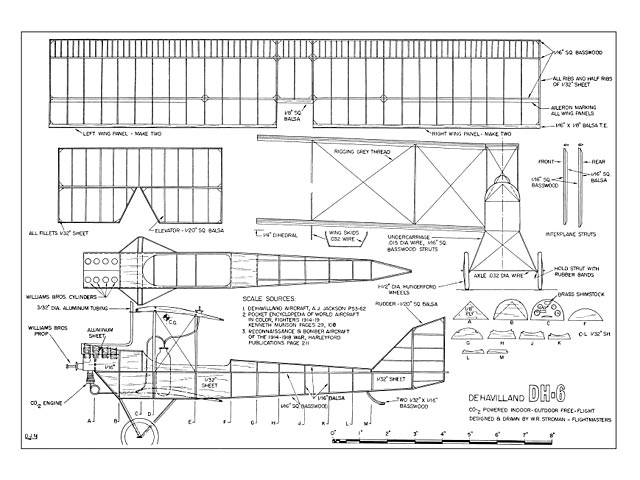 Quote: "Here's a beautiful little F/F scale ship that's just as quiet as it is pretty using CO2 for its power. A Little deHavilland DH-6, by W.R. Stroman

The full sized DH-6 was angular and boxy, but still it had a delicate look about it. There was a reason for those lack of curves. This plane was to be built in great numbers for the training of new pilots in World War I, and straight wings, rudders, etc were easier to manufacture than curved ones. The upper and lower wing panels were interchangable and this led to the rumor that the wings were made in one hundred foot lengths and cut in the field as needed!

Like most trainers, the DH-6 had its fair share of nicknames. Due to the slow flight performance it was known as 'The Sky Hook' and 'The Clutching Hand.' Its large single cockpit earned it the name 'Flying Coffin,' while the Australians called it the 'Dung Hunter' on account of its numerous crashes by student pilots.

The DH-6 is a good subject for Free-Flight Scale. It has generous dihedral, a large wing gap, a long tail moment, and enough detail to make it look appealing. It flies very well, the ROG is smooth, it climbs to about 45 feet in large 40 foot circles then descends as the CO2 engine loses power to a gentle landing. It flys much the same indoors or out, but a word of caution. On the second test flight outdoors I filled the tank and increased the power slightly. After a fast (for a DH-6) climb, it caught a thermal and stayed up for two minutes. As it flew over a housing tract during its journey it was rather scary!

As this model is CO2 powered it's nice to fly in the city due to the lack of noise. Also, the cleanliness of operation makes it possible to fly indoors (and your sandwiches wont taste like glow fuel when you eat lunch later). This plane won first place in the famous Vegas Vulture World War One CO2 contest in Dec 1975 in Las Vegas. Enough of my talk, let's build your model.

First, 1/20 in square balsa is used on much of this model. This can be obtained from Peck-Polymers as can the CO2 engine, Hungerford Wheels, and other goodies. Write for their catalog, it's 50c and well worth it! Second, try to keep this model as light as possible! It should weigh no more than 1-3/4 ounces with the engine in it.

Cover your plan with a clear plastic film (Saran wrap for instance) and make a rib template of sheet aluminum. If you make the rib template first, you can cut a few ribs out each time you are waiting for something to dry. By the time you're ready to build the wing panels, most of the tedious work is done. Let's start with the fuselage, everything must fasten to this anyway..." 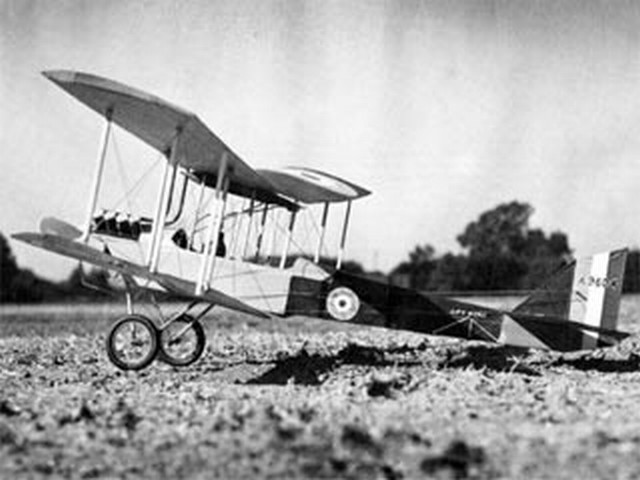