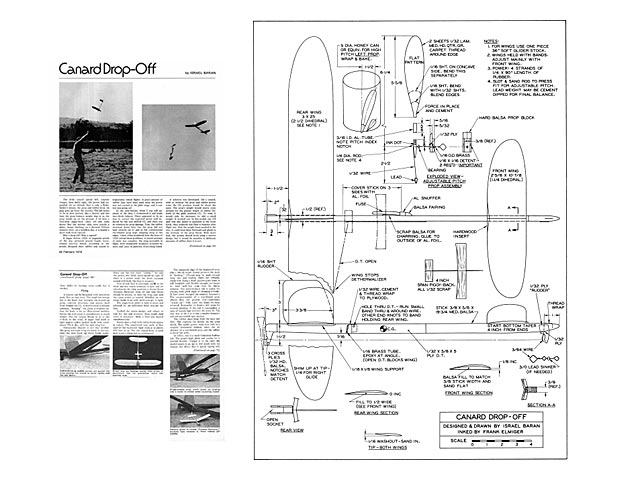 Quote: "In sequence, this sheet balsa job drops its rubber and prop, then releases parasite glider, and finally DT's for landing. Canard Drop-Off, by Israel Baran.

The little canard spirals left, counter torque, then shifts right, the power half expended. At an altitude that is only a Wakefielder's dream, the prop and rubber drop, (A gasp goes up from the crowd,) The fall seems to be in slow motion, like a chutist, and this time the prop balance weight digs in so the prop stands up on the ground. A bit later a four-inch piggy-back takes off - and stalls down. But the mother ship, now strictly a glider, keeps climbing on a thermal. Fifteen minutes later, on a windless day, it is landed a short walk from takeoff.

Why a drop-off? Why a canard? It began before 1920. A magazine article of the day pictured several fragile, loose-tissued tractors which, according to the article, dropped their rubber and soared to respectably timed flights. A great amount of rubber may have been used since the power was not carried in the glide stage, and a contest was going on!

In the mid-thirties, when I was still unaware of the idea, I re-invented it and made two - both failures. There appeared to be no way to correct the expected severe stall induced by the rear shifted CG, and there was no solution for prop damage. True, the rubber streamed down first, but the prop did not land entirely on it, and so the conventional two-bladed prop kept chipping away at the edges. I have often wondered how the boys of 1920 solved these problems. A recent attempt of mine was complex: the wing moveable in flight, with changeable incidence actuated by wires and cams in addition, Everything failed.

A solution was developed. On a canard, with or without the prop and rubber power train, the CG position would be about the same. The prop's weight would nearly compensate for the greater length of rubber forward of the glide position CG. To trim, it would only be necessary to add a small weight. It worked out. In this model, one 3/0 split fish line sinker is squeezed to the front hook, then soldered and filed to balance after flight test. Had the weight been needed in the rear, it could have been flattened and glued to the bottom of the prop block. With more lead, the system should work using a tractor design, but it would be sensitive to different amounts of rubber; here it is not..." 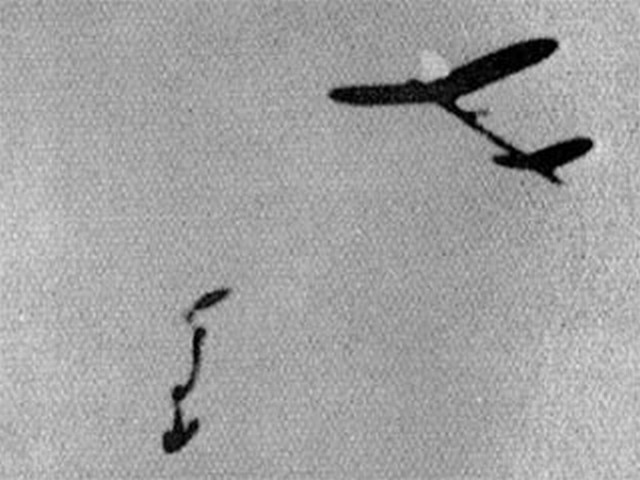