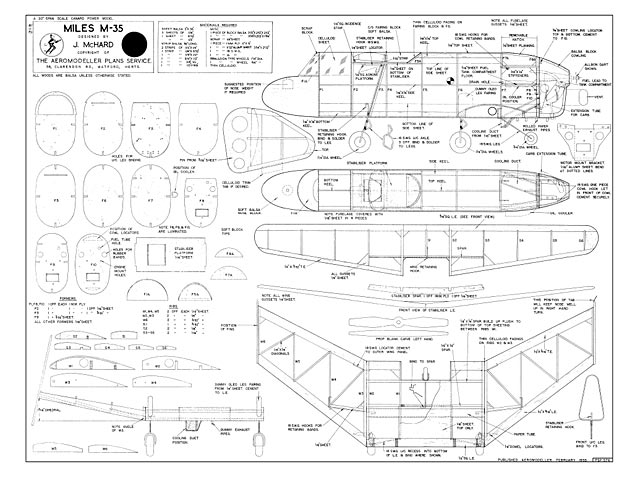 IN THE 1952 Aeromodeller Annual, we made the mistake of quoting the Miles Libellula as an unsuitable subject for a flying scale model. To Sgt John McHard, the king of the unorthodox among RAFMAA members, this was a challenge not to be passed. 'Max' looked up the APS 1/48th scale drawings for the single engined pusher canard M.35, reached for his Allbon Dart, and decided to prove us wrong.

The model was finished in double-quick time and soon RAF Station, Wellesbourne Mountford, became used to the novel sight of a diminutive 20 in span tandem wing model, flitting off the runways like the dragonfly family after which it was named. Repeated flight tests showed an inherent stability better than many another scale type.

If you like the unusual, want something to give you plenty of amusement per flying minute, and that is robust enough to stand the rigours of small field flying, then the M.35 Libellula should be first choice.

Fuselage is started by making up the laminated bulkheads (3 and 8-10) and attaching nosewheel and engine mount. F2 is also laminated and the band hooks fixed in F7. Cut out the stabiliser platform and add stiffeners. Then assemble all formers on side keels, add top keel, platform, stiffeners and lower keel in that order.

Select straight grained medium weight 1/16th for fuselage covering, and since the cross-section is constant, a wide sheet can be wrapped around the formers, in four panels. To simplify this wrapping, moisten the outer surface of the sheet, and should the curvature between F7 and F8 present any difficulty, a coat of shrinking dope on the inner surface helps. To make sure that a fairly large planking area is continued through the fuselage length on either side to transmit engine loads, add the side panels first.

Before fitting top and bottom panels, switch to the Mainplane centre section which is made up complete with undercarriage, sheeted between ribs R1 and firmly cemented by the LE and main-spar to F6 and F7. Fit the rear wheel and the engine cooling duct. Then complete the fuselage planking.

Add a noseblock 'blank' cut to side and plan views, onto F1 and fix the windscreen former, then curve to shape. Make rear access hatch, engine cowl around mounted engine, fit a tank and arrange a neoprene tube carburettor extension.

Wing outer panels, stabiliser and fins are next completed, only points that need special attention are the wire fittings for band hooks and incidence setting of the mainplane. Cover whole airframe with lightweight Modelspan, give two coats of clear, then colour dark earth and green camouflaged upper surfaces and duck egg blue undersides. The prototype 'P' is in yellow like its surrounding circle, and the pusher airscrew would be black with yellow tips." 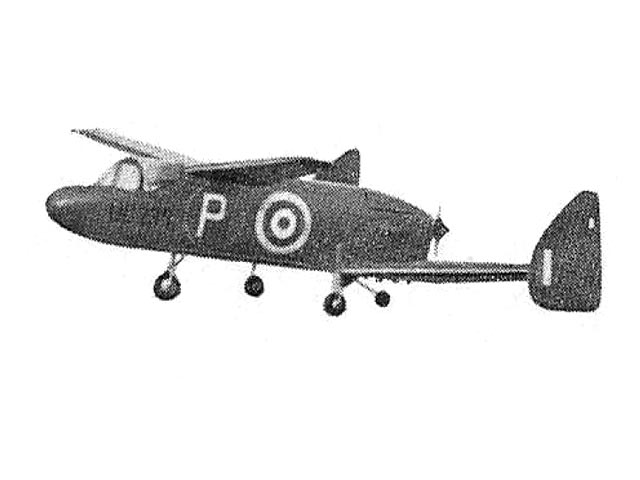