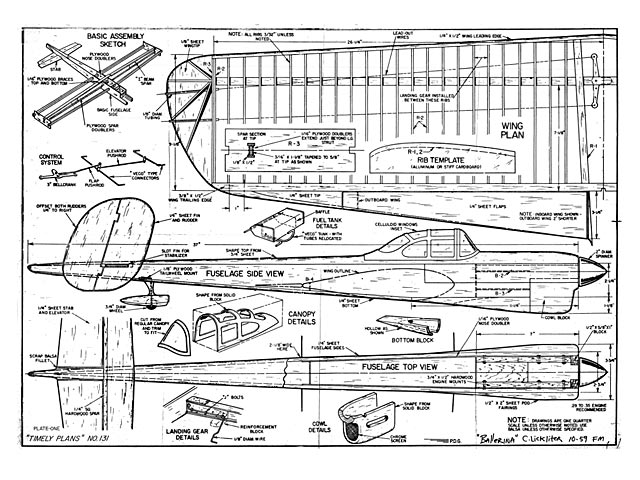 Quote: "Dances through the stunt pattern gracefully and has that appealing look so often sought by modelling fans. Twin rudders and fancy pants, also. Ballerina, by Charles Lickliter.

Two years ago Bob Randall, 1958 Open Stunt Champion and myself joined forces with two other Indianapolis modellers, Don Ogren and well-known designer-flyer Charley Mackey, to try to promote stunt flying in Indianapolis. At that time we formed the Stunt Masters Precision Acrobatic Club. The Stunt Masters have tried to help anyone who was interested in stunt flying. We think that the amount of new modellers in and around the Indianapolis area shows that to some degree we have helped. After last year's flying we had many talks about new designs for this year The Ballerina is my answer after talks with Bob Randall on the effect that the looks of a plane had on the outcome of a contest.

My point was that a plane could be designed and painted to make good flights look even better. I think that the Ballerina will do just that. As to the performance of this ship it is the easiest handling, smoothest flying ship that I have ever had the pleasure of flying. It flies well on any kind of a day, be it windy or calm. On mean overhead figures and in the sharp corners it never goes slack on the lines. This plane will almost guarantee perfect takeoffs and landings by nearly flying itself.

Construction is very simple if the plans are followed exactly. The body is built first and then the wing is built right through the body sides. This type of building gives a very strong airplane. The plans are simple and complete but they must be read and completely understood before starting any building whatsoever. Templates should be made and all parts cut out, After the parts are cut out, assemble the motor mounts on the plywood doublers and then assemble the sides to the doublers. The sides are assembled by use of the firewall and the bulkheads for the fuel tank compartment. After the sides are together tack cement the top, bottom and side blocks as shown on the plans. Trim and sand the blocks to the desired body contours.

After the body is shaped remove the blocks and hollow them out to reduce weight. The next step is to install the 'I' beam, leading and trailing edges and the wing tip ribs. Be very careful of alignment at this time. Hinge the elevators and stabilizer together and cement in place, again paying special attention to alignment. I stress alignment at this point because in my opinion the alignment of stabilizer, wing, and motor mounts is the most important single step in getting a good flying plane.

Flaps are installed at this time along with the wing tips. Next, all controls are put in. You will note that I have given sketches on the plans for the control system. This control system seems to be best for this airplane. At this time the landing gear should be installed. You are now ready to cement the blocks on. Make sure that the tailwheel is installed and that blocks are hollowed out as much as possible without weakening them..." 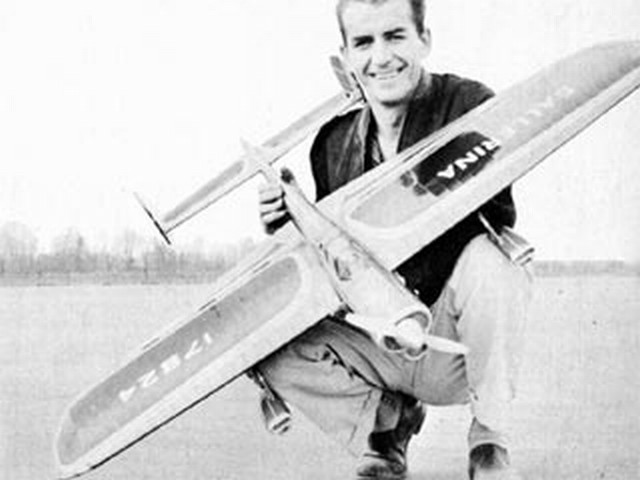