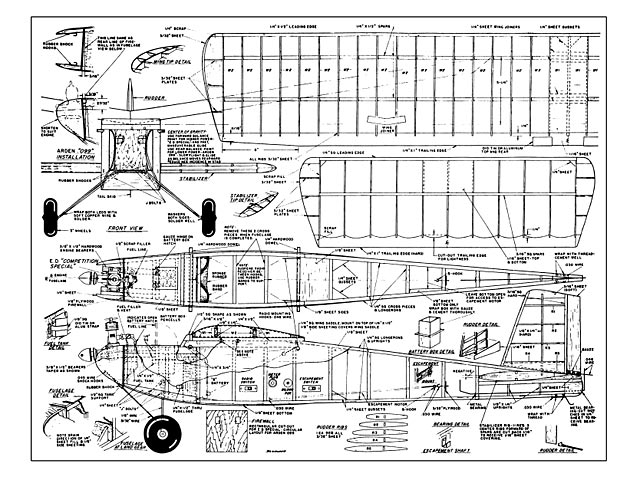 Quote: "Windy Joe was published in the April 1952 issue of Model Airplane News. I have a friend who built one and allowed me to fly it. It's a fantastic vintage R/O ship and does indeed handle quite well in the wind."

Quote: "Power it with an .09 for safe beginner's machine, or use more power for maneuverability, exceptional windy weather performance. Windy Joe by Bil Winter.

Windy Joe is unique among RC models. It can be used as a beginner's first radio job when powered with an .09, or fitted with any good 2 cc diesel (about .12 cubic inch displacement) or up to a mild .19 on glow, it makes a good ship for advanced fliers who know how to use abrupt responses for spectacular maneuvering. With the higher power, this machine has been flown successfully on a number of occasions in winds with gusts up to 35 mph with close-by landings.

When using more power, the plane is trimmed rather far forward on the chord, just aft of the front spar; this gives a fast glide that minimizes the difference between power-on and power-off speeds and consequently the difference between rudder response when the engine is on or off. With low power the glide is slowed up by balancing further to the rear - weight of engine and lack of bearers accomplishes this automatically on an .09, so that the transition to glide is not noticeable unless you can hear the motor. Lighter wheels can be used with the .09.

The reason that Windy Joe can be used as a dual purpose machine is the thin wing. There is adequate area but there is not too much lift - or drag. This means that an .09 can pull the plane around and climb slightly even when large sized batteries are employed - and does so in a mild breeze.

On high power the absence of lift customarily associated with RC jobs means that the plane never gets sky high. In a wind the machine will work its way cut well up wind and not sit at a high angle of attack while rising like an elevator to be blown away eventually. It has made 360's, remaining up wind when a 25 mile wind was encountered. When trimmed forward, Windy Joe can do wingovers from side to side during the glide, standing on a wingtip. How-ever, to get the most out of it, the flier must blip around the turns and have a radio that will give numerous quick responses in rapid succession; otherwise the ship may be thrown out of the turn. or whipped back into the turn in a breath taking bank.

Another important feature is structural strength. On at least four occasions the model was spun into the ground, twice hitting in a vertical on-the-spinner position, and one of these times on a runway. The fin was knocked loose twice, and the engine lugs broken once, otherwise damage has been inconsequential.

This strength was accomplished by dispensing with pretty but always vulnerable cabins and windshields, eliminating openings like doors, and by the use of extra large materials with a filled-in double-sheeted forward section..." 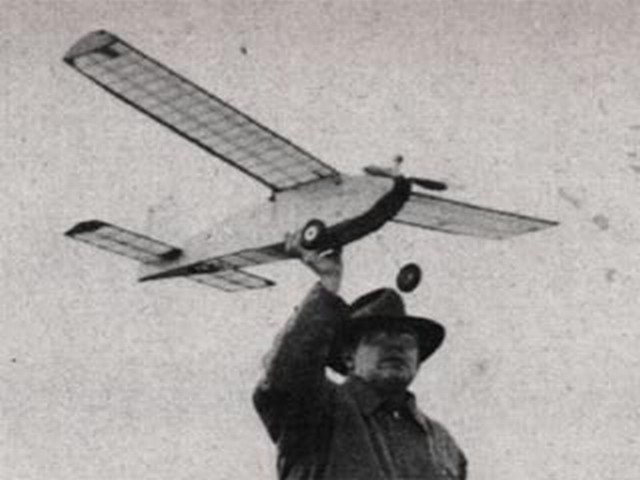