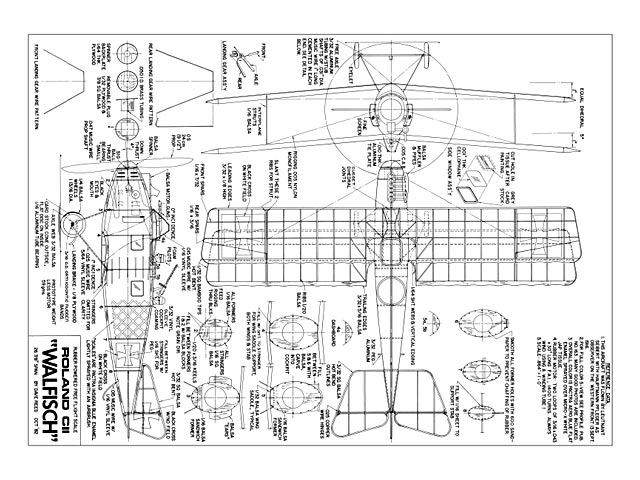 Update 13/11/2020: Replaced this plan with a clearer copy, also now added article, thanks to theshadow.

Quote: "Fishing around for a F/F Scale win? Try this WWI biplane for bait! Roland Walfisch, by Dave Rees.

I love World War I airplanes. During no other period in the relatively short aerial history are the aircraft more colorful, more varied in design, or more suited to construction as a rubber powered free flight scale model than those from 1914 to 1918. Nearly any modeling subject you choose from WWI can be painted screaming red, purple stripes, checkers - or that ultimate example of virtuoso scale modeling - lozenge camouflage. The question then becomes how to select a subject that will not only be a successful model, but will also have enough charisma to go all the way to the top levels of competition at the Nets, either AMA or FAC.

The Walfisch is a relatively obscure design with a lot to recommend it. Let's see if I can con you into building one. Long noses are fairly infrequent in WWI airplanes due to the widespread use of the rotary engine with it's better power-to-weight ratio. The six cylinder inline-engined types, such as the Walfisch, have better moments, require less ballast, and create less drag than rotary-engine ones. Those perennial areas of fragility - the wing cabanes and struts plus the landing gear - were all ingeniously circumvented by the Walfisch's designers, which should prove advantageous to the modeler as well. The fuselage was made tall enough to attach top and bottom wings solidly to it directly with no cabanes at all. The wings are closer together than usual as a result, but do not dismay, the Reynold's numbers at which rubber scale models are flown are so low that intra-wing flow disturbance is not likely to be a factor. The interplane struts are sturdy sheet rather than the normal collection of rather flimsy sticks. How am I doing? The landing gear is widely triangulated and well integrated into the fuselage to absorb those devastating hot downwind landings. The gear is also long enough to be able to use a really good-sized propeller and still takeoff if necessary. (The present AMA rules fortunately permit biplanes to be handlaunched, which is a bonus advantage for the Walfisch.) The stab has enough area to use with no enlargement at all, assuring no loss of scale points in AMA rules.

In fact the Walfisch has been transcribed directly from the 3-view at the scale shown, with the only deviation being the additional 5° dihedral. Zero dihedral simply will not be stable in this configuration; save it for the Fikes and Lacey& Notice the relatively few rigging wires compared with the usual WWI design. Simple and trouble free.

Last in its list of virtues is the architectural detail which can be lavished on the Viiiifi'sch for lots of dazzle and pizzazz to even the most experienced of judges. There are seven distinctly different color schemes that I know of; maybe more if you want to dig a little. But if all of the above doesn't convince you - wait till you see it fly!

Walfisch history: There were only 275 Walfisches built, which makes them a rather insignificant speck in the eye of the beholder, when viewing the thousands of Fokkers Nieuports and Sopwiths built during the great war. It was its innovative concepts and clean lines which gave it fame disproportionate with the few actually in service. The first production aircraft were delivered in March of 1916 and their speed with the 160 horsepower Mercedes engine was astonishingly equal to the Nieuport II and Sopwith Pup-with two men and a full military load! Their speed made it impossible to fly in formation with the Albaros, Rumpler & LVG types then in use at the front. But this performance was not without drawbacks. The high wing and power loading made the Walfisch a tricky item to land in the typical German airfields at the front, which were little more than small clearings. The wing position, while providing unsurpassed upward view for the crew, blocked the view of the ground during landing, so obstructions were difficult to see in time. Most casualties were from landing rather than air-to-air combat. The level of inexperience of most pilots at the front undoubtedly exaggerated, the problem.

As a long range reconnaissance machine it proved very difficult to intercept and two Wafisches were customarily sent on such missions. Aircraft were changing so rapidly, however, that by October 1916 the production of Walfisches was halted after being considered 'outdated'. Secondary duties and training service kept them in use well into mid-1917 before dropping from sight forever. (Ref: Pro-file Publications Ltd. #163).

Construction: The plan has been drawn in three-view style so the subject can be seen assembled and fully detailed. Build everything right on the plan as you normally would. I recommend starting with the tail, since it is the most straight-forward to build. Use 3/32 square balsa for all the structure, bearing in mind that tail parts should be the lightest in the model to avoid tailheaviness. I bent the oulines over a 75 watt soldering iron after first soaking them a while in water. When the glue is dry, round all the edges with sandpaper, and cover with white Japanese tissue. Alcohol-shrink the covering only, as water will probably warp the light balsa framing. Hot Stuff the hinge wires in place to one side first, then the other, Set the stab and rudder aside until the painting phase.

The wings present few construction problems for persons familiar with "deep spar" open rib style, The lightness of this method is necessary because a biplane always carried the added weight of the additional wing when compared with an equivalent monoplane. If the both wings can be built half as heavy, you will not take much weight penalty. A nice feature of this design is that every rib is exactly alike. Make up an aluminum template .020 inches thick matching the rib outlines. This template should be used to cut the upper ribs, all fifty of them, from light 1/20th sheet. I shaped the leading and trailing edges while they were still attached to the sheets from which they were cut. This avoids the need to do much sanding after the wing structure is glued together. The bamboo tips may not be familiar to you, but they are actually quite old, originally being used in designs of the thirties. They are bent similarly to those in the tail around a soldering iron, providing a seamless, warp free wingtip that is almost indestructable, but very light. Notice that the tips taper evenly from the bottom and top of the wings. Notch the spar ends in their centers, and bend the bamboo into a V2 high airfoil when viewed endwise to the wing..." 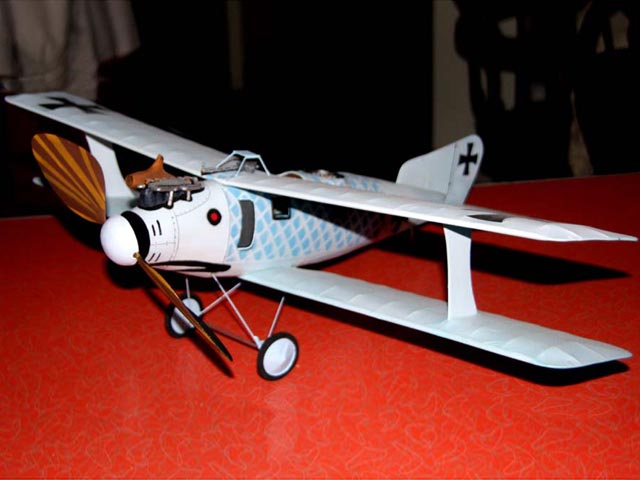