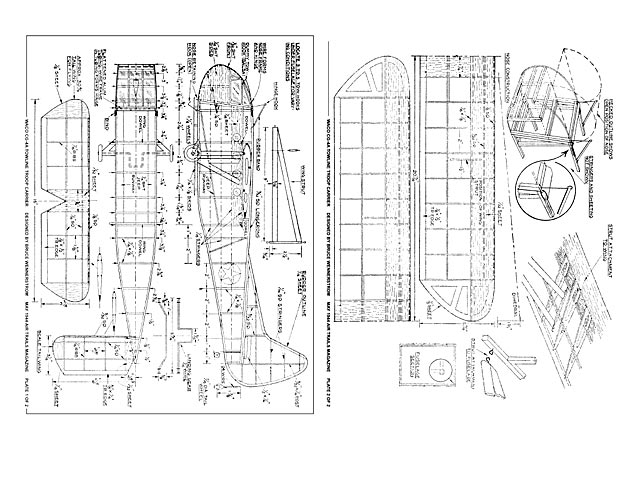 Quote: "This flying scale version of the Waco CG-4A gives realistic performance. Try towing one behind your favorite gassie!

While scale model gliders cannot be expected to compete with purely contest designs, they will give consistent, realistic flights. A design like this CG-4A would certainly be excellent for weight lifting, due to its strong, efficient wing and large fuselage. Weights could easily be placed inside the fuselage, rather than taped underneath. Also, if your club goes in for gliders, perhaps they will have special events for scale model gliders only.

Designed to carry fifteen fully armed soldiers, or a jeep and crew, the Army's CG-4A troop-carrying glider has a wing span of eighty-three feet nine inches and weighs approximately three thousand pounds. The ship is equipped with many innovations, such as wheels which are dropped after the take-off, overhead tow hook, and a complete instrument banel.

Article page, text and pic, thanks to BillW. 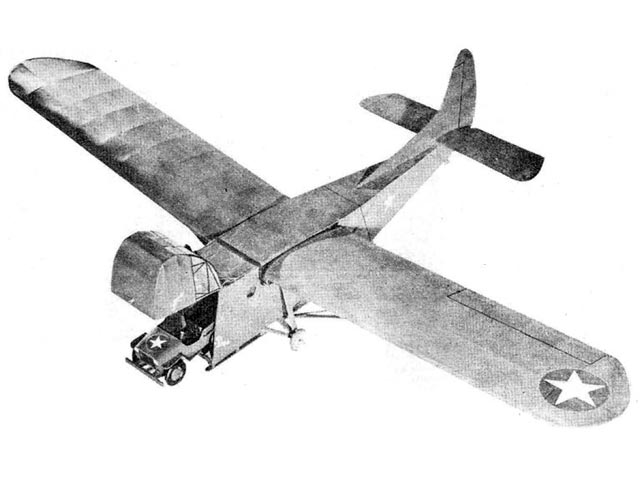 I had the great fortune and joy to have had the acquaintance of a man who was at one time a World War Two combat glider pilot. Captain Ray Bean flew the Waco CG-4a (oz705) into the hell of Normandy, Market Garden, Bastogne, and over the Rhine into Germany itself. In fact, Ray was the inspiration for this “build.” I used OuterZone’s Air Trails plan from 1944 because it was easy to construct, easily modified, and has the “flavor” of the actual aircraft [pics 003-006]. The Waco CG-4a, along with the Airspeed Horsa gliders were true “heroes” along with the men who risked their lives in the air-assault operations that utilized them. I never heard Ray say anything about how dangerous it was to fly in a combat glider...at least referencing its construction, etc...only about the hazards of the landing zone and the Germans waiting below. I have to smile because I'm reminded of the George C. Scott speech in the movie "Patton,"...something like "Well, when your children ask what you did in the Great World War Two, you won't have to answer that "I shoveled s___ (manure) in Louisiana." That describes Ray and all the other millions of freedom-dedicated men and women who risked their lives during the war. They had a purpose and they went after it...in spite of the risks involved...and there were many. I'm tempted to leave this model just the way it is...uncovered. I've seen so many photographs of the CG-4a's without fabric...for whatever reason...I'm amazed at how these "sticks" resemble the nature of the actual aircraft. In my mind...she's the very essence of utility and beauty. Wingspan came in at near-24 inches...I cheated and added an inch or so to the original reduced plan. Horizontal tail surfaces are also enlarged. I'm convinced she'll fly.
Neal Green - 03/08/2022
A 'Hats Off' to all Capts. Ray Bean who risked their all, and so many times lost it entirely, so others could live, in their generation or later ones.
Neal, if you have such justifiable waverings, why not leave this model as it is and build a second one for covering? Ok, it's two of the same, but balsa strip isn't really expensive, and you can use the patterns from the first, right? Just a thought.
Miguel - 04/08/2022
I saw a glider of this type made with radio control in a video... A real flying shoe. I can hardly imagine in reality what it could look like in real life.... see: https://www.youtube.com/results?search_query=wako+planeur
Olivier - 13/08/2022
Add a comment