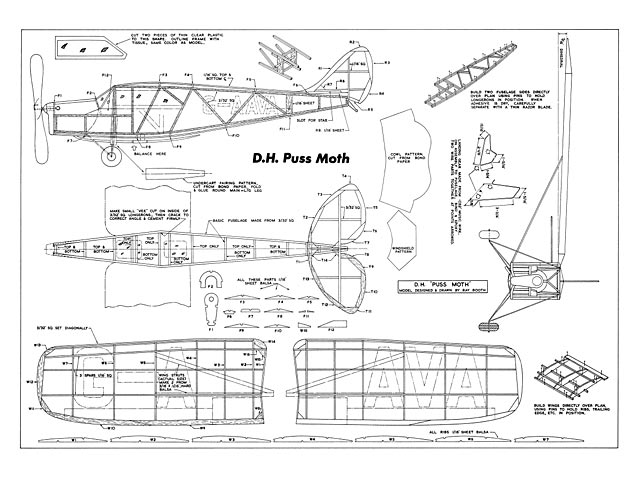 Quote: "Some aircraft are made for modeling. This is one of them. A simple Rubber Scale ship to fly in the calm of twilight. DeHavilland Puss Moth, by Ray Booth.

The prototype Puss Moth, G-AAFA, was designed and built by deHavilland in England during the early part of 1930, and was destined to make a considerable contribution towards the progress of civil flying all over the world. The first machine was fitted with the (then) new DH 120hp Gipsy 111. It was a four-in-line inverted aircooled engine, though later models were fitted with the Gipsy Major of 130 hp. These later models differed quite considerably from the first ship, with welded steel tubular fuselages, instead of plywood covered wood construction.

The airplane was designed as an option-al two or three place ship, the third seat being fixed to rails, which enabled it to be positioned alongside and slightly to the rear of the second seat. The wings and tail were quite conventional in construction, wood with fabric covering, and the wings were capable of being folded about the rear spar attachment point, supported on vee struts. One rather ingenious device for the period was the airbrake. This was achieved by swivelling the main landing gear fairing through 90 degrees, which produced quite an appreciable amount of drag. This idea was retained on two later designs. the Leopard Moth and the Hornet Moth.

The Puss Moth had many fine long distance flights to its credit, particularly those of the late Jim Mollison and Bert Hinkler (an ex AVRO test pilot, incidentally). Hinkler made a 10,000 mile flight in the Fall of 1931 from New York to London via the South Atlantic crossing. In March 1932, Medison flew a Puss Moth from the South of England to Cape Town, South Africa, in four days seventeen hours, and in August the same year he flew from the II& to Newfoundland on the first solo flight across the Atlantic from east to west.

The Model Design. Unlike most rubber powered scale ships, the tail assembly is scale outline, thereby preserving the attractive outline of the ship. The dihedral has been increased slightly, for lateral stability considerations. The general constructional design was based on relative simplicity, but maintaining a realistic appearance when completed. The original model had a weight of 1-1/4 ouunces ready to fly, which included a small cube of clay (1/4 in cube) fixed behind the balsa nose block inside the cowl. Power was supplied with one loop of 3/16 x 1/24 rubber, 13-1/2 in long.

Construction A flat building board of not less than 16 x5 inches is required, though a bigger size is desirable in order to maintain a reasonable building schedule. There is no particular building sequence for the major components, most modelers have their own preferences regarding which items are built first. However, when transfering the various outline shapes by your own favorite method to the balsa sheet (1/16 medium), take particular note of the grain direction indicated for the various parts on the plan. You might save a little on the wood by placing things differently, but you lose patience later when they split! On the subject of glue, the modern PVA white glue will give a good warp-free structure, even if it does take longer to dry!

Fuselage. First cover the plan with wax paper or rub wax or soap on the drawing at all the joint positions. Select some reasonably hard 3/32 sq balsa for the basic fuselage structure, then pin down the top and bottom longerons over the plan as illustrated at the top right-hand side of the plan. Note that both sides as assembled together, one on top of the other, for accuracy. Add the various diagonals and verticals to complete the basic sides, plus the 1/16 strip for the rear motor peg. Remember that one of these strips must be pushed down to the level of the building board, but the upper one must he fitted flush with the top of the uppermost fuselage side..." 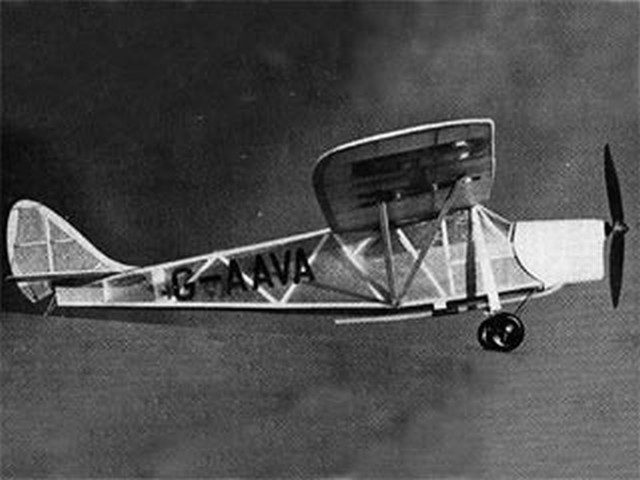