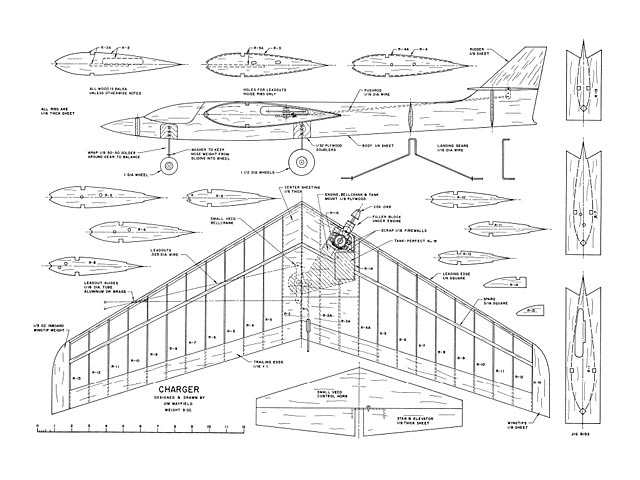 Quote: "This 049 swept-wing stunter will fly on long lines because of relocated off-set engine. Does full AMA pattern. Charger, by Jim Mayfield.

FOR THOSE who want something really different yet capable of doing the AMA precision aerobatic pattern, the Charger is it! Charger was developed as an experiment to test an unusual thrust arrangement in a competition, precision, stunt design. The thrust idea isn't original, but was borrowed from Charles Mackey and Bernard Ash, who tried it years ago. As a competition machine, the ship is not quite up to form, but for sport and fun flying it fills the bill. With the engine and tank mass near the CG, Charger turns instantly! As would be expected, there is no line tension problem.

Construction begins with the ribs. Using a new sharp blade, cut out all the ribs, making R-1, R-7 and R-13, jig ribs. On the jig ribs, cut the rib shape in a dashed fashion so the jigs may be trimmed off easily. Ribs 2A, 3A, and 4A, for the motor mount and center sheeting, should be self-explanatory. Cut the trailing edges, leading edges and spars to length. Cut out the combination motor, tank and bellcrank mount, and drill engine mounting holes, tank overflow hole, and bellcrank mounting hole.

For a true warp-free wing, jig-build it on a flat warp-free board and then stress-relieve it. The jigs are shown on the plan as past of certain ribs. Pin jig ribs over the plans, on the building board, and build as much of the wing as possible before removing it from the board.

Slip the leading edges and spars through the jig ribs and pin them in place. Starting at the tips, and work-ing toward the center, slip the ribs in one at a time, horizontally between the spars. Twist ribs vertically, locking them into the spars, and slide toward the tip and into place. Pin the ribs to leading edge and spars..." 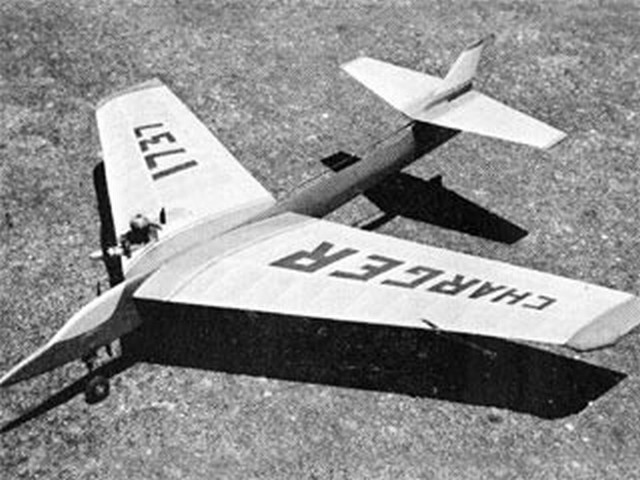