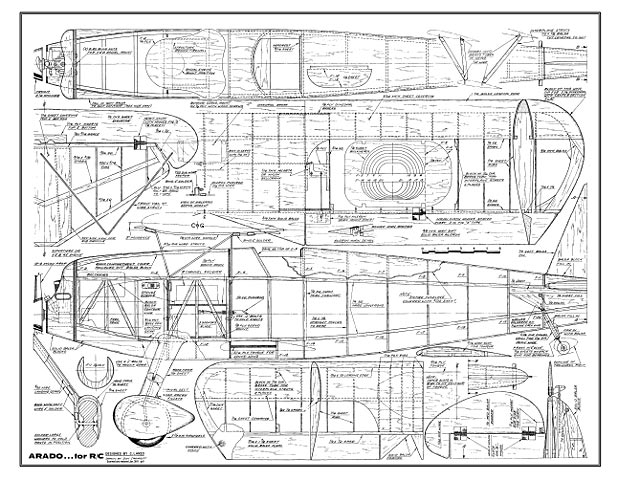 Quote: "By Chester Lanzo. Multi-Channel Scale Radio Control is always exciting but it is doubly so when we have the combination of a pre WW-II military biplane and one of the best model designers in the business.

The Arado AR 68 was a not too well known single place German fighter produced before World War II. Powered by a BMW liquid cooled engine developing 750 horsepower, it could attain a top speed of 205 mph. The main wing span was 36 ft. and over-all length of 32 ft., almost equal to the wing span provides the ship with plenty of longitudinal stability. The short bottom wing 25 ft. in length gives it the appearance of a sesquiplane while overhead in the air. All biplane models in flight give a very pleasing appearance and this model with its unusually long tail moment arm is a very appealing sight.

The Arado is scaled down to obtain a span of 59 inches and a chord of 11 inches giving an area of 615 sq inches. Added to this is the area of the bottom wings of 240 sq inches which sums up to a total of 855 sq inches. The total weight of the ship with radio is 7-1/2 lb. Landing gear is of the torsion type with large air wheels for good take-offs. Using an 8 channel reed receiver, the following movable controls are obtained: Full motor trim, steerable tail wheel, ailerons, elevator and rudder. The bottom wing flaps can be connected to the engine control for their operation at low speed if wanted.

Introduced into this model is, I believe, a new concept to obtain good inverted flight characteristics. The bottom wing airfoil on the model is a Clark Y type with its excellent normal flight abilities but the larger upper wing has an airfoil similar to the NACA 2412. With these two airfoils, one working best in the upright position and the other taking over in the inverted position an excellent combination of both types of flying is accomplished.

The power for the model is a vertically mounted K&B .45 or Supertigre .49 with a simple radial mounting for ease in adjusting the down and side thrust of the engine. Although the plans show 0-0 thrust adjustment, place 2 degrees down thrust and 2 degrees right thrust when mounting by slipping washers behind the radial mounting.

The bottom wing of the Arado is mounted with a tongue type of fitting. This method has proved very useful in hard landings as the wing panel will pop out of its mounting in a hard landing rather than shearing itself in half upon striking the landing gear.

The ship, after trimming, was found to have very good flight characteristics in both the upright and inverted positions. In the air the Arado behaves in much the same manner as most stunt R/C contest type models. Rolls are executed very easily and quickly with no apparent loss of altitude. The model acting as if it were strung on a wire through the longitudinal axis. The stall tendencies of the model are gentle and not as abrupt as in most monoplanes..." 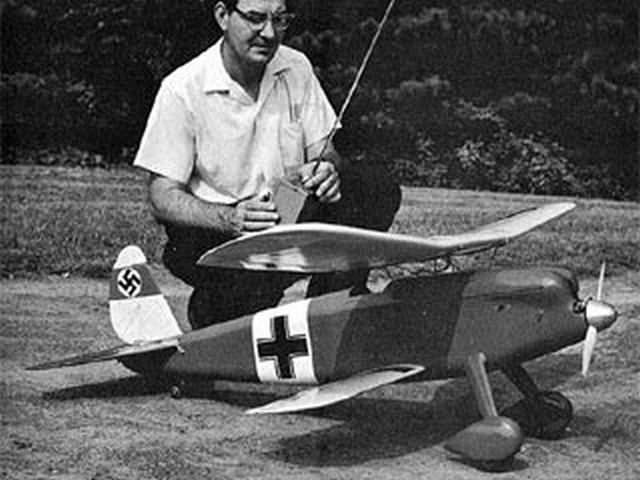 I currently have this airplane. I built it in 1964 from plans from a magazine yellow wings and red fuselage and tail wings. I won first place in scale R C event that the Utah State Aeromodelers had at that time.It has only been flowen about three times with a KB 45
Duane Dietrick - 04/05/2020
Add a comment