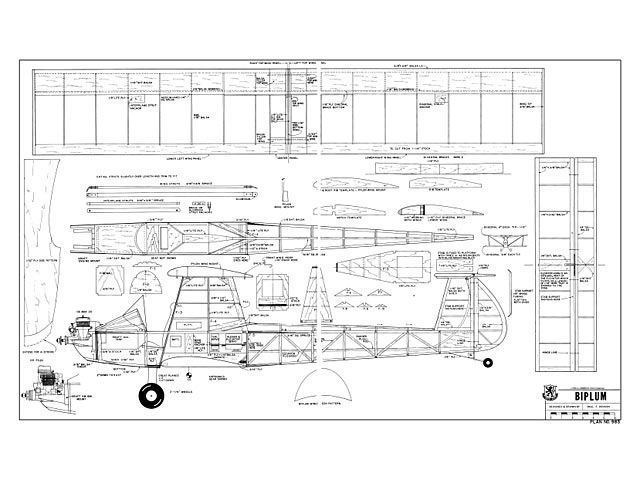 Quote: "An exciting .15 to .25 powered Stand-Off Scale model of an ultralight that was conceived in Paris, France. By Paul F Denson

The December 1984 issue of Sports Aviation covered a fly-in at Brienne, near Paris. Among the many planes photographically presented was the ultralight Biplum. In Europe, ultralights are known as ULM's. The Biplum was built by M Maurice Guerpont.

Our Biplum is Stand-Off Scale and was constructed using only a color photograph. The photograph was furnished through the courtesy of Mr Jim Eich (EAA 34624) who wrote the article in Sports Aviation. By the time we were able to contact M Guerpont, we had finished Biplum and were flying it regularly. He was kind enough to send many photos of the full size Biplum under construction as well as finish and flight shots. Also we received one sheet of 3-views. Should you wish to construct a scale model or a full size Biplum, you may contact us through RCM and we will furnish you with his address.

To the best of our research ability, and Parlez Vous-ing Francaise, the name Biplum means two feathers or more exactly, two quill pens. We have an idea that the two feathers is a coloquialism referring to the two wings of the plane.

When we saw Biplum, it was love at first sight. We are not active bipe builders but that was not going to hold us back from building this little staggerwing lovely. From the beginning it was obvious that there were quite a few features that would call for a bit of ingenuity; this heightened the challenge.

Our first idea was to build the plane with two one-piece wings and, if you wish, it still could be done; the pylon wing mount could be built into the top wing. The wing struts would then become more or less decorative. We have always liked the manner in which the top wing of Proctor Bipes is mounted so we decided to go that route.

We have built quite a number of T-tail planes, both glider and power planes but they were mostly full flying stabs, two halves both of which pivoted in the center and built so the pushrod moved horizontally. The problem was, we had to - with vertical movement - pivot a hinged stab. The method we used gives some differential motion (more down than up) which may be corrected by offsetting the clevis on the servo wheel. We did not make this correction and there seems to be no inherent problems; in fact, it helps a bit when you fly upside-down.

We could see no ailerons in the picture of the plane so we did not include them on the model. We felt the 4° dihedral on the top wing would make the plane quite stable and the 5/8 in dihedral under each lower wing tip would also help. After the first flight, we were relieved to find that Biplum was quite stable without ailerons.

Construction. Wings: Using the plans as a guide, cut all ribs to shape. Cut the spars to length and the webbing to width; then, as you need something, it is ready. We made two templates out of 1/32 ply. One a full root rib template for wing tips, root ribs and the pylon wing mount. The other one for cutting inner wing ribs. After all of the ribs, plus a few extras, are cut then the spar notches are cut into the template which is then used to cut all the notches..." 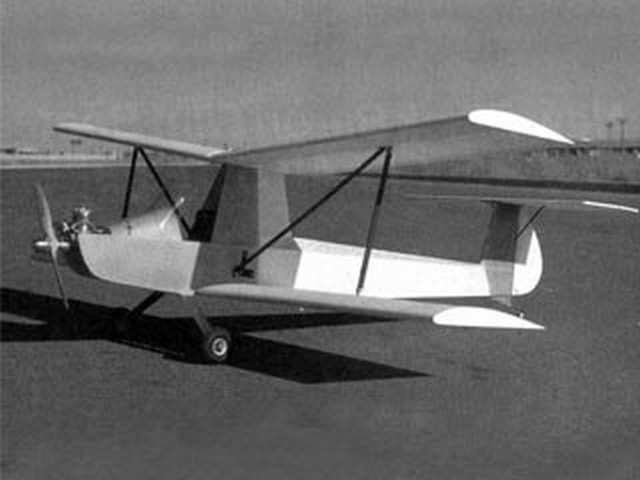