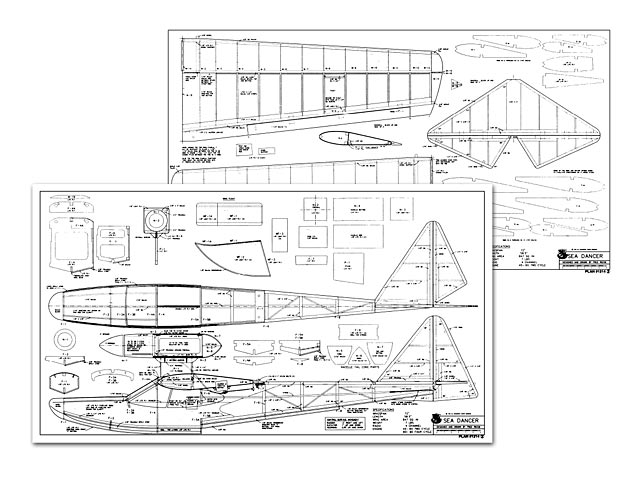 Quote: "The Sea Dancer is a step back into a time when the big flying boats were the pride of the skies. However the new version is better than ever. Lightweight construction, balanced aerodynamics and lots of power make this seaplane of the '90s perform. By Fred Reese.

There is something majestic about the old flying boats like the Martin Clippers, the Hughes Giant Flying Boat, the Douglas Dolphin, and the Grumman Widgeon and Goose. Back in the 60's, Don McGovern designed many model seaplanes including the classic Piranha (oz268), Mako Monster (oz9790), and Moray Monster (oz9803) that captured our imagination before there were modern radio control systems. There were also the Berkeley Privateer (oz311) kits and the Jetco Navigator (oz306) with their long lines and graceful curves that dated back into the 50's. These were designs that caught the elegance and grace of the early full-sized flying boats. Thinking about these earlier seaplanes and what set them apart, I designed the Sea Dancer. It needed to be big and it needed a tapered wing and graceful lines to satisfy my need to revisit those earlier times.

I drew the Sea Dancer back in 1990 right after I finished the first Cloud Dancer (oz6512). I guess I was waxing nostalgic and thinking about possibilities while looking at the Cloud Dancer plans, so l used the Cloud Dancer wing and tail in the new design. However, I did not build the Sea Dancer until 1995. During those five years a lot of things happened and changed. We moved twice, changed jobs twice, and I got involved with other projects. Early in 1995 the Las Vegas Radio Control Club, of which I am a member, announced a float-fly at Lake Mead in June. That was all I needed. I dug out the original Sea Dancer drawings and put them into my CAD system using computer generated airfoils to get the finished plans.

The Sea Dancer has the same shaped rudder and stabilizer as the Cloud Dancer because I liked the distinctive shape, and it worked well. The large, graceful tapered wing gives the model some of the elegance I hoped for. The fuselage is designed to be functional as well as attractive. The rudder sits low enough to work as a water rudder at slow speeds without resorting to a deeper fin. I wanted a V-bottom so the model doesn't slap or skip on the water. It settles smoothly on landings. With the addition of the triangle chine strips, the front hull acts like a tri-hull speed boat. The lift on the water is increased and the spray is deflected downward in the front and away from the prop. The outboard floats are similar to the Sea Master but are deeper and are placed near the center of the wing panels. The volume of the tip floats is great enough to keep the wing from sinking in a stiff breeze. Being further inboard, the floats do not affect the directional control during take-offs or landings. The Sea Dancer steers on the water like it was on wheels.

By the time I built the Sea Dancer, I had built three Cloud Dancers in different sizes and had logged hundreds of flights on these models. I knew what worked and where changes should be made. I wanted the Sea Dancer to be fully acrobatic. The force arrangement is much like a low wing model with the thrust line just above the wing. The wing and stabilizer are in line like the Extra and Laser acrobatic aircraft. The mass of the engine pod and tank balance the weight of the fuselage so the roll axis is in line with the wing and stab. Couple this with a very light wing loading and lots of power and it spells performance. The Sea Dancer is a joy to fly. It is light and the wing is very forgiving, so it can be flown slowly if you wish. It is very predictable and goes exactly where you point it.

The Sea Dancer will roll like it is on a string and it will knife-edge forever. The model is big with a full six foot wingspan, so it is easier to fly than some of the smaller seaplanes just because you can see it better.

The Sea Dancer was designed for .60 cu in engines. I chose a plain bearing 2-stroke engine for my Sea Dancer because engines near the water get wet. Also a K&B .65 or an O.S. FP .60 cost a lot less than the engines with ball bearings, yet will deliver plenty of power for a 7lb airplane. A.40 engine would fly the Sea Dancer very nicely, and anything larger than a .60 would make it a rocket ship..."

The Sky Dancer design has been around for a long time and has been kitted by Ace Hobby Distributors in different sizes. Many of my flying buddies have built them, either from scratch or kit, with excellent results. When. Frank Fanelli asked if I would be interested in doing a product review on the new Sea Dancer, there was no hesitation about the flying boat version of the famous Sky Dancer design by Fred Reese.

When I first looked into the kit box I was pleased to see the quality of the wood and the "die crunching" of the lite ply was not crunching at all but on a par with laser-cut parts. It was clean and accurate. Congratulations Ace Hobby Distributors! Parts were still held in place with tiny bridges and easily came loose with a sharp #11 blade. However, there wasn't enough 1/8 x 3/8, 3/8 square and 43 sheet balsa. This I expect will be corrected in the future.

Included in the kit were pushrods, clevises, blind nuts and all the hardware needed, even wide fiberglass tape for joining the Flying boats typically ride low in the water (above), and it's important that all openings are sealed water wing halves. The throttle control rods were tight. The author's Sea Dancer prototype (below) weighed only 58-1/2 ounces, bare bones and uncovered. missing in my kit, but a call to Ace Hobby Distributors and Tom Runge saw that they were in the mail right away. Excellent service! The plans were even complete enough for an experienced builder to scratch build the flying boat from plans only, but the assembly manual by Fred Reese, the designer, gave step-by-step instructions with check-off blocks for each step completed. There were 16 pages of photos, sketches and instructions. One would have to try to make a mistake for things to go wrong.

Construction: The construction of the hull is quite straightforward with two sides built over the plans from 1/2-inch lite ply and a 3/8-inch square balsa framework aft of the wing for strength and lightness. The bottom of the hull is covered forward of the step with lite ply and aft of it with 1/2-inch sheet balsa. Doublers from the trailing edge of the wing forward give it strength. A curved sheet of 1/2-inch balsa covers the top of the nose and a hefty block gives the nose its proper contour. Be prepared to carve the balsa block to shape. Ace's instructions make it easy.

Seldom have I seen such accurate die-cutting as Ace has done with the wing ribs. These fit the spars so well they can be assembled without glue. Naturally it's a good idea to glue them well with thin CyA glue after they have been put together over the plan. The tail parts are assembled flat on the plan from 3/8-inch square balsa. The whole structure is quite light and sturdy. As a matter of interest the completed airframe including wing tip floats came out to 581/2 ounces.

At this point some thought should be given to waterproofing the inside of the hull because, no matter what precautions are taken, water gets in, particularly around the area between the wing and the hull. Clear butyrate dope, painted inside the structure is a lightweight way of doing this.

I would strongly advise the builder to make provision for wheels that can be taken off easily. It becomes much more versatile to be able to fly the Sea Dancer on land first or when lakes or ponds are not easily accessible. The instructions show a nice way to do this, but don't forget a steerable tailwheel that can be removed for water flying. I used a different approach that is quite simple. I glued and bound two pieces of 3/1s-inch brass tubing across the hull at the same height right through the 1/2-inch lite ply flush with the outside and bent up two separate wire gears, one for each side that slide into the tubing. Surprisingly enough, these have no tendency to work loose if the gear is slightly sprung.

Controls and pushrods: A standard 4-channel radio is all that is needed, but it helps to have dual rates, as I'll explain under 'Flying.' Strip ailerons are handy and simplify the installation of the radio. All hardware is supplied for the controls and is of a good quality. Instructions are clear and easy to follow for the control installation, but one thing is particularly bad and that is no mention is made to support the elevator and rudder outer pushrods from the trailing edge of the wing to the tail inside the hull. This is a distance of over 20 inches..."