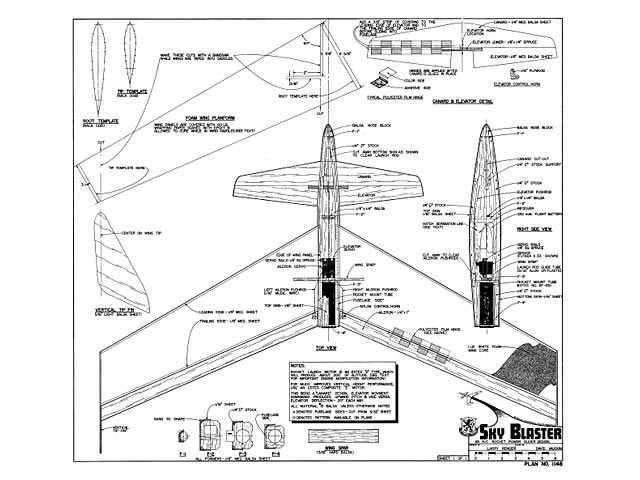 Quote: "Whether you're using a rocket motor or flying from your favorite slope, this little plane is a blast! Sky Blaster by Larry Renger.

I guess you would have to describe it as a crackling snarl. That's the sound a radio control rocket glider makes as it blasts its way straight up into the sky. Why a rocket powered model? Because it can be done, of course. The SkyBlaster is capable of a 200 foot vertical climb on a standard Estes D engine, and a whole bunch more with a composite E. From that altitude you can soar the model or do aerobatics. You can do vertical victory rolls and zooms during the climb with SkyBlaster, it is very rugged. Believe me, if you want attention at the flying field. you'll sure get it with this design.

The SkyBlaster is a developmental model for the recently announced Astro Blaster (oz11562) kit from Estes Industries. This article is intended both to give the modeling community more information about rocket powered models, and to provide an opportunity to build one from scratch.

Mike Dorffler of Estes, and I established some criteria for SkyBlaster before any design work was done. The first requirement was that the model had to use standard materials and equipment. Second, we wanted to achieve good span model performance, and finally, the model had to be reasonably easy to build. SkyBlaster is a bit harder to build than the Astro Blaster kit with its molded wings, but no harder than the average slope soaring glider. Of course, by building from scratch, you have the opportunity to customize if you desire to do so.

The canard pusher swept-wing configuration has some major benefits for a rocket glider design. The main challenge with a rocket glider is to control the stability on the climb so it can climb out with no control inputs required. Due to SkyBlaster's extreme wing sweep, the motor is nearly at the CG so balance point shift is minimized as fuel bums. In addition, the model is essentially symmetrical around the thrust line, so no pitch is induced inertially. The canard provides the capability of pitch control without requiring a control mixer, and smooths out the pitch response a bit..." 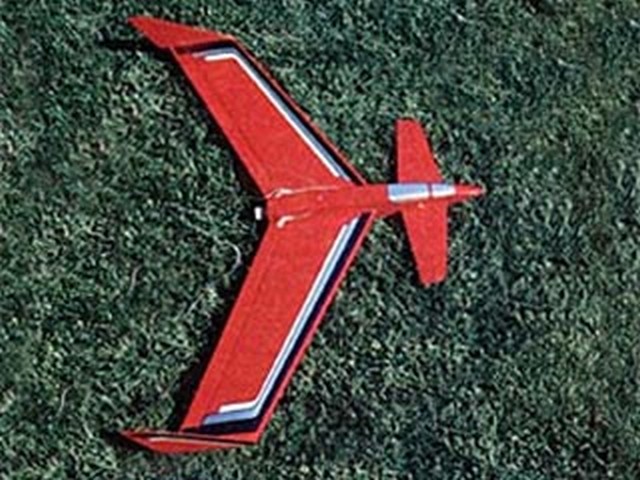