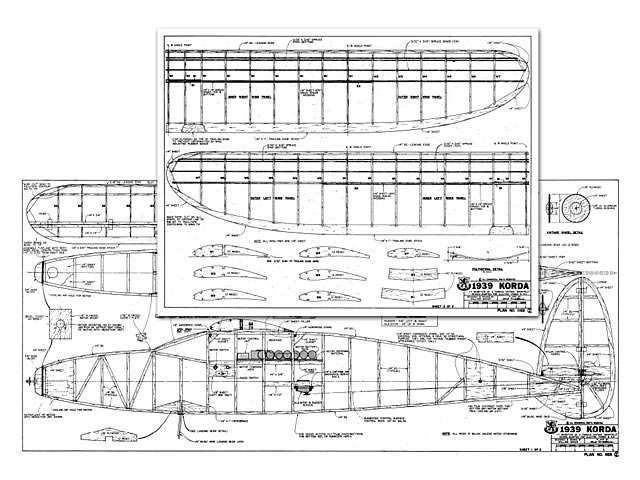 I look upon old-timer models as scale models, in the sense that the degree of perfection achieved is related to the fidelity to the original model. Most of us are willing to make some compromises for the sake or practicality, but each deviation is carefully considered, so as not to seriously detract from the illusion we seek, In this article I will refer to an occasional departure from 'scale,' or to some feature that is a 'scale detail' not absolutely necessary for performance.

Sir Charles Wakefield donated a perpetual trophy in 1927 for an annual International event for rubber powered models. Which is to this day actively competed for, and it is the oldest lnternational Championship event for model aviation. In 1938, the winner was James Cahill of the United States, which meant the 1939 event veguld be held in the USA. The evert was held at a New York City golf course August 6, 1939, and was won by Dick Korda of Cleveland, Ohio. The model was published as the Wakefield Winner (oz5395) in the November 1939 issue of Air Trails magazine and shortly after was kitted as the Wakefield Winner (oz420) by Megow. lt was extremely popular, and the numerous copies made displayed the same affinity for thermals as the original. You may be surprised to know that a kit is still being produced by the P&W Model Service, and a 3/4 size version is kilted by RN Models. Both of these kits should be available from FAI Model Supply, PO Box 3957, Torrance. California 90510. I might point out that the 3/4 size version is a model of a model, just like this one is!

Why build it? Well, it flies very well, but then a lot of models fly well. It comes clown to nostalgia; Those of us who started our modeling careers before, during, or shortly after WWII have a special admiration for the modeling champions of the 1937-41 era, I think in part because the magazines again and again from 1941 to 1945 reminded us of their exploits and designs, they were not pushed into oblivion each year by the newest winner like current world and National Champions are. So for people of about my age, names like Korda, Lanzo, Struck, Taibi. Goldberg and many others are really meaningful, and for an old rubber flier like me. the Korcla is really special for the dramatic way it won in 1939 with a 43-minute 29 second flight!

In recent years, I have put down my rubber winder and picked up a transmitter, and have been flying electric power mostly, as the most practical way for me to get a soaring model up to thermal altitude. I like soaring models of all sorts, including modern and Old Timer designs. I built the Comet Clipper (oz922) from RCM plans and converted it to electric power, and I also have one of the popular electric Playboys. I've seen model magazine construction articles on electric R/C versions of the Sparky (oz85), the Jabberwock (oz8000), and the Pacific Ace (oz963), all Old-Timer rubber models and thought: Why not the greatest classic of them all?

I scaled the plans up by a factor of which gives a span of about 74 in and a wing area or 600 sq in. From experience, I felt this would be a flyable size for a geared Astro Flight Cobalt '05' on 7-cells. The 15 size motor is the same size and weight, so the only difference in weight would be the added cell's (up to 12) and the 15 with 12-cells is recommended for those who want a fast climb. I really like the leisurely, dignified way mine climbs on 7-cells.

A word on flying: Mine is very easy to fly, very stable:, flying very slow and floats on the wing. It is a delight to take-off and let climb in wide spirals, and then shut the power down and watch the floating glide. There is very little trim change at this power level, between power off and power on. It does neat touch and goes and low slow flybys and will, of course, thermal; l am seriously thinking of adding spoilers. It is not intended to be acrobatic and it's slow; not a windy weather ship. Mine weighs in at 60 oz. l could have built it lighter, but I wanted a practical model that could be used a lot.

A couple or questions younger folks may ask before going into the construction: Why is it so 'fat' and why is the landing gear so long? This is a scale model remember, and to shorten the landing gear would, in my opinion, be too great a change in appearance. The original, or real Korda is a rubber powered model and rubber models use very large diameter propellers since the 1939 rules required an unassisted take-off from the ground (in practice usually a sheet of plywood or two). The large fuselage cross section is also a result of the 1939 rules that related fuselage length to cross section; The greater the length, the greater the cross section required: a compromise decision being required of the designer..." 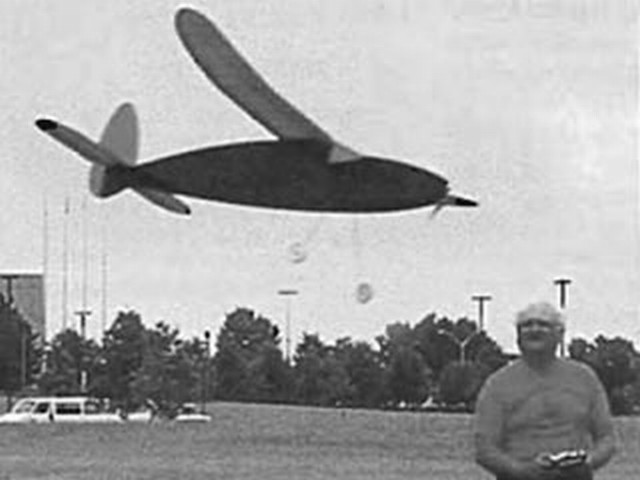