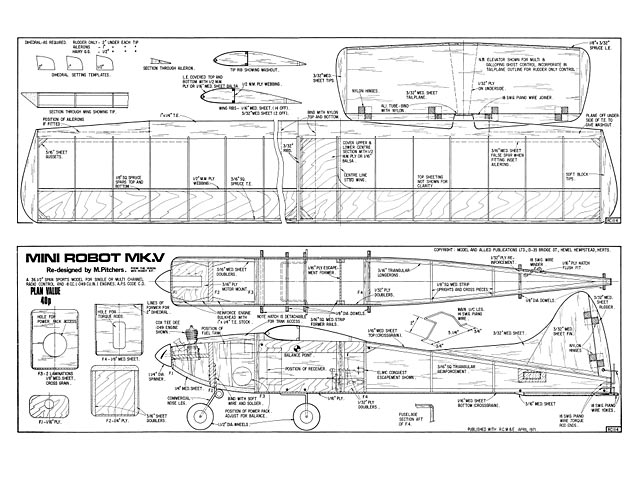 Quote: "A LINE OF DEVELOPMENT. By Mike Pitchers. The story behind this month's FREE PLAN.

ABOUT three years ago my son bought a Veron Mini-Robot (oz10900) kit. The resulting model flew so well that I decided to build one for myself. This Mk.II was designed to accommodate two actuators, an Elmic Compact, and a modified Futaba for engine control. The engine used was a Cox Medallion .049. The airframe was strengthened in places, and I think this was the cause of its poor performance. The all-up weight was 23 oz., against 19 or.. for the kit aircraft, It dragged itself around the sky and proved most disappointing. It is clear that this de-sign should be kept below 2fli or. or provided with much more power,

Mk.III (Photos above) was designed to make up for the shortcomings of the ill-fated Mk.II. More power was provided by a Cox .049 TD. The airframe was extensively lightened, and inset ailerons operated by brass tube torque rods running through the hollow trailing edges. The Elmic Compact was modified to operate the ailerons, the elevators worked in the normal way by torque rod. The wing can still knock-off, the mechanism is protected by press studs in the linkage.

This aircraft has now completed well over 100 flights. It is a most exciting model to fly, being capable of continuous loops or rolls, horizontal eights, vertical upward rolls etc. On the glide there is hardly any reduction in sensitivity to control. Coming down from height it is quite easy to pick up some speed and complete a roll, and this on the glide with a dead engine. Rolls are, of course, barrel rolls, but much straighter than the skew-loops usually produced with rudder only.

The original Mini Robot by this time had become very tatty following various 'sudden arrivals', and so Mk.IV was drawn up (photo right). Dimensions, areas, and rigging angles as Mk.I. Rudder and Elevator controls from an Elmic Compact. Internally, further alterations giving better accommodation and access to the radio and DEAC pack. The dummy cabin was eliminated as was the external hatch under the nose. The wing was strengthened by the use of spruce for the spars and leading edge. At special request from my son, a different tail unit was included. What more different than the American Mooney, so the Mk.IV became the 'Mooney Robot' (sorry).

A friend then suggested that all these new features should be incorporated in a new design which could be modified as required, all the way from a docile trainer to a hairy aerobatic bomb. Thus the Mk.V was drawn, this time on tracing cloth so that the friend could have a copy (Mk.V plan herewith).

Still retaining the original areas, moments, dimensions, good performance was more or less guaranteed. At this stage the Mk.IV was altered to conform as nearly as possible to the new Mk.V design (photo right), and proved in flight. One further Mk.V has been built, and this too flies well.

So we come to the latest Mk.VI (photos below). This is the first one which departs radically from Mk.I layout. As can be seen in the photograph, the object was to produce an aircraft having the appearance of a WWI German fighter. I have neither the time nor the patience to build a super-scale job, although I admire the chaps who do. To give the model some guarantee of airworthiness the new design was drawn on tracing paper laid over the Mk.V plan. Scale-wise the general effect is a blend of Fokker D VII and D VIII, thus the number painted on the fuselage reads Fok D VII-1/2. Every effort has been made to save weight..." 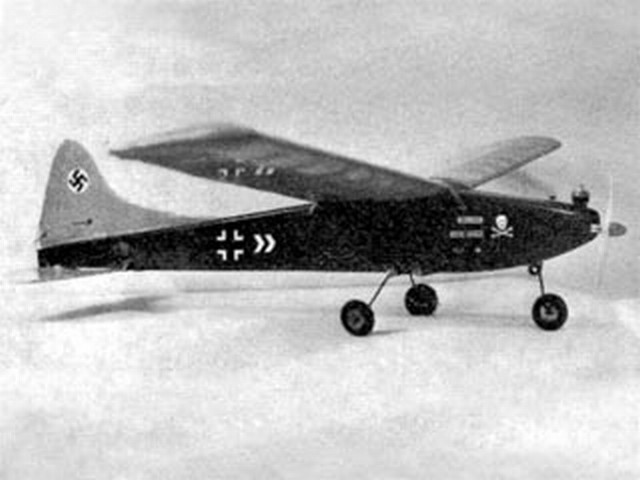 Hi Mary, here are 2 photos of the Mini Robot MK-V I am building from the plan of the same down loaded from the Outerzone [more pics 003, 004]. It's an adaptation from the Veron Mini Robot as shown on the plan. Must say the thing is build like a tank - spruce spars and a ply D box wing. Perhaps it did not only sport German war marking but actually went to war? With some apprehension I build my version lighter. Funny how it's 1970s Germanized all the way - those kits are known to be as going down the design road of 'heavy build' and 'fast flying' as result and all that weight needs to come to a standstill on an unintentional impact with any solid object as Terrafirma might well be. As opposed to lightweight, often found in Veron kits, that is still strong enough and by no means slows down a fast engine and just saves you from closing a hole in the ground and engine to dig out on impact. Well I shall see if my apprehension is based on lack of insight this designer had or me when flying has commenced. He seems a very experienced designer, but saying that why is there no dihedral brace shown on the plan? Sure it needs that. With all these meandering thoughts I am very curious to know what the original Veron Mini Robot plan looks like. Perhaps a kit collector will become adventurous and let his plan step out of the box with accompanied thoughts and send a scan of it to the Outerzone and so the world to see.
Joost - 12/10/2017
I made a photo of my just finished Mini Robot, built from the plan on Outerzone [more pics 005]. Snow made an interesting background; it has not flown yet.
Joost - 11/12/2017
First photo [pic 006]: Three mini Robots with different style rudders back in 2012. All have some minor variations from the plan - including lighter wing structure! The model at the top flew very well for several years with a Cox Black Widow .049 and rudder only control (using modern R/C equipment). It was later converted to electric when the "Bumblebee" (lower right) was lost in the bush. It still serves today as a glider tug and has made hundreds of flights. Model lower right is (was?) the aforementioned electric Bumblebee. It was our glider tug for several years, but had an affinity for tall trees. We searched and searched, but still MIA. The model lower left is still a regular at our club field: Far Valley MFC, Ontario, Canada.
Second photo [pic 007]: Mini Robot #3 - after the electric conversion (and elevator control). It took a while to wipe all the slime off. :-)
Third photo [pic 008]: Mini Robot #4 - this model is still going strong as well - this pic was taken last Saturday - October 17, 2020
Video here (one of several): https://www.youtube.com/watch?v=WPmxxA9z1fw
ChrisMoes - 26/10/2020
Add a comment