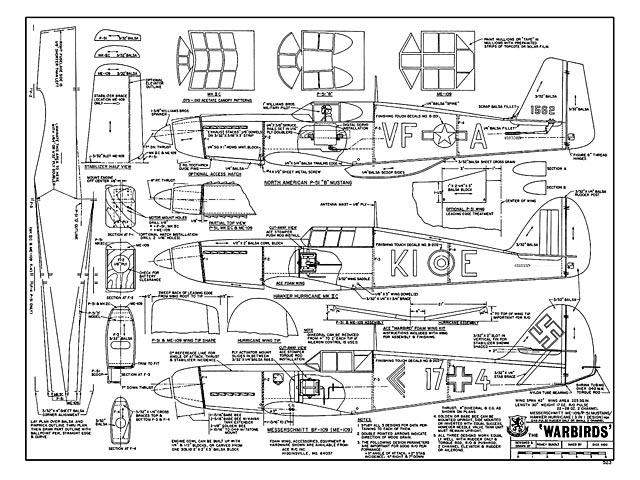 Quote: "Three variations on a single design, these 'Weekend Warriors' are intended for a Cox .049 and single or two channel proportional. Ideal for schoolyard or vacant lot flying. Warbirds by Roman Bukolt.

Three variations of a single design, intended for use with a Cox .049 Baby or Golden Bee and Ace Pulse R/O radio, the Warbirds are stable, docile and easy to fly. But put a TD .049 in the nose and a small 2 channel radio in control of the ailerons and elevator and it's The Battle of Britain all over again!

In an era of full-house Digital Systems, single channel system sales have hit an all time high - Quoting the lead sentence on page 6 of the December issue of R/C Modeler Magazine, the article on Pulse Proportional points out that more amd more modelers are returning to the small compact aircraft that can be flown from school yards, small fields, and vacant lots after work and before supper, by nearly any member of the family. Many flyers enjoy the simplicity and economy of single channel proportional flying, totaling up hundreds of hours of flying time where they would normally have logged only a few hours on their big expensive .60 powered craft with all their necessary pre-flight checks and adjustments, large selection of accessories required, and the larger and, often more distant, flying field. Then too, the small single channel aircraft is mighty nice to bring along as a back-up plane on those weekend flying sessions when you 'prang' the big one.

In keeping with the trend towards small, uncomplicated, easy-to-build-and-fly aircraft, we bring you the 'Warbirds.' Basically one single design, the builder has the option of constructing the Messerschmitt BF-109 (Me-109), the Hawker Hurricane Mk.IIC, or the North American P-51 Mustang - either B or D model.

Designed around the thoroughly tested and proven Ace foam wing, the Warbirds proved to be as easy-to-build, trim, and fly as any high wing trainer. In addition, they offer scale-like realism in a relatively untouched area of small model design, that of low wing retracted gear, WW II fighter aircraft. No, the models do not have retracts! In fact, they have no gear at all! Models this small are normally hand launched anyway so landing gear would serve no useful purpose.

The aircraft looks quite clean in the air and every flight ends in a 'Combat Mission' type belly-in landing. As flights are accumulated, minor repairs are inevitable, wear and tear of hard use begin to show on the airplane and, unlike other models, the Warbird takes on an even more scale like 'battle worn' appearance.

Once test flown and properly trimmed, this model can comfortably be flown in the average school yard or large vacant lot..." 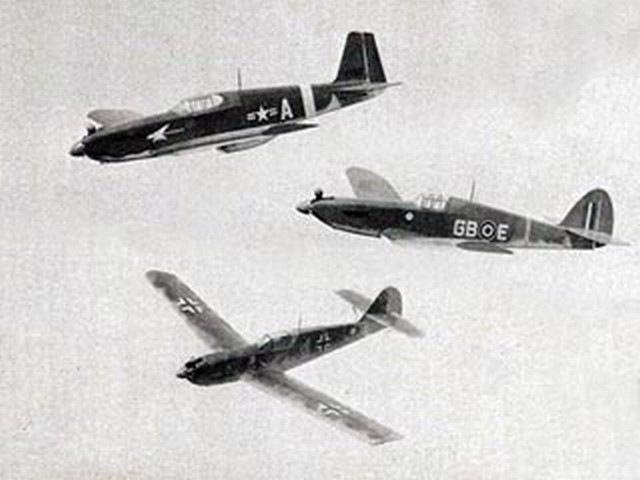