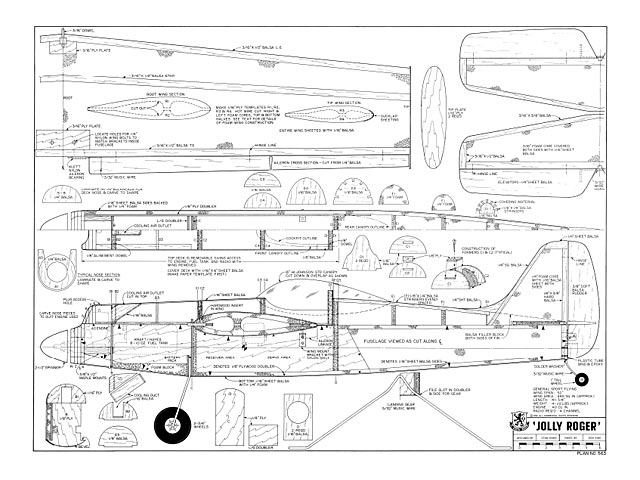 Quote: "A .40 size mid-wing designed to challenge the .60 powered ships. Combining the looks of a Goodyear Racer with wood-and foam construction, the Jolly Roger may just pirate away some of the glory of the larger machines. Text and photographs by Stan Hines.

I hate models - those that don't resemble full scale planes. But, I like to try new ideas or combinations of ideas. This could be what makes someone feel he must design a new plane even though there are so many excellent ones already available.

After watching some superb flying by experts with .60 powered ships, some of us debated the possibility of designing and building a model to challenge their performance but powered with a .40. To do this would require a super light, yet strong design and a light, but powerful engine. I had a new ST G21- 40 so decided to try my hand at the project. The criteria for this plane would include:

1. Thrust and drag forces close together, so power is not wasted.
2. Parasitic drag reduced by fillets.
3. Smooth finish and wing tip plates to reduce tip vortex.
4. Control surfaces large enough to provide positive control at all times .
5. All this put together in a package that has both eye appeal and durability.

It was decided that a mid-wing would give the desired force alignment requiring the least compensation from level to inverted flight. A nearly symmetrical airfoil would also seem best and good stunt performance calls for a sturdy, high lift wing. For overall eye appeal a tapered, swept leading edge profile terminating in tip plates sounded interesting. To keep weight down a tail dragger style would help.

Jolly Roger is, therefore, an experiment combining the looks of a Goodyear racer with a wood-and-foam construction. With an MRC radio, four servos and a 10 oz tank the dry weight is just 4-1/2 pounds. Before we get to the construction let me tell you about the perfor-mance you can look forward to if you build her. Perhaps the best way to describe it is to take you along on the test flight.

Preparations were completed by simlly adjusting all surfaces to neutral. The Center of Gravity was exactly where my calculations showed it should be by locating the radio gear properly. On the plans it will, at first glance, seem to some to be too far back, but remember the swept back leading edge? Because the engine was new and muffled, it had to be set very rich, use a 10/5 prop, and idle fast. So, we were not able to anticipate anything like the full power output of which this engine is capable.

As we taxi out of the pit area excellent ground handling is experienced even with the grass slightly longer than usual. Let's try some high speed, simulated, take-off runs to see which way she breaks. Tail draggers have a tendency to swing hard just as the throttle is opened and this one is no exception. There she goes, a hard break right - lets abort! Back down the field for another another run and this time we will hold in a little left rudder until she gets going good. Beautiful, right down the middle so everything is go.

Lift-off, and just a touch of right aileron and we have a very realistic, low angle, climb out. After gaining some altitude we roll in some right trim, about the width of the tab, throttled back a little and we have our first hands-off flight.

Unbelievable? Not at all. All the planning, calculations and careful construction were showing their worth. However, having a bird that flies doesn't make it a winner, so let's see how she reacts to the controls. Easy turns had already been made and one characteristic was already evident: Aileron control was extremely precise, but not touchy. We try a large loop, then a tight one. Almost no correction is required in either one to get a nice round one and no tendency to snap roll is evidenced. A slight amount of corkscrew will be worked out between rudder and aileron trim adjustments. The new engine is losing a few rpm's indicating it is hot, so let's shoot a landing and cool it off.

Throttled back to about half, we swing wide for our approach run over the tall hay field. Looks like we are a little high so chop some more throttle and drop the nose - Oops, dead stick. Still 50 yards short of the field the motor quit cold! Well, here's where we find out about the glide and several other characteristics. We start to flare out about 10 feet above the tops and hope for a relatively soft set down in the uncut hay. Really stretching the glide now, it looks like we may even make the strip. Easy now, just a little more and we are over the end of the field. Drop the nose a bit, flare out again, watch that wing, and - touchdown! She was back on the grass as smooth as could be.

More of our design criteria had been checked out by this event. At slow flight, just above stall, all controls had functioned perfectly, even the ailerons. After a few more flights I was to apply the term 'crisp' to her controls and I have had no reason to change since. Frankly, I have never flown a plane that seemed to have so little lag in its response to stick control. Almost no anticipation is required and no counter control is needed.

By now I hope you are anxious to get started on building one just like it. Construction is basically a form of laminations of foam and either balsa or plywood, or both. I use white glue on the large surfaces and epoxy on all other bonds, especially where there is likely to be high stress, such as the motor mount, landing gear, stabilizer and wing center joint. The fuselage sides and bottom are simple to construct since they are built up flat. Pre-cut the 1/16 balsa sides and the 1/8 ply doublers from the plan. Lay out the bottom on 1/16 sheet to cover from the landing gear to the tail a little oversize from the top view plan. The excess will be trimmed off later, after assembly. The 1/4 foam sheet is easily cut with a sharp knife to the same size as the side...." 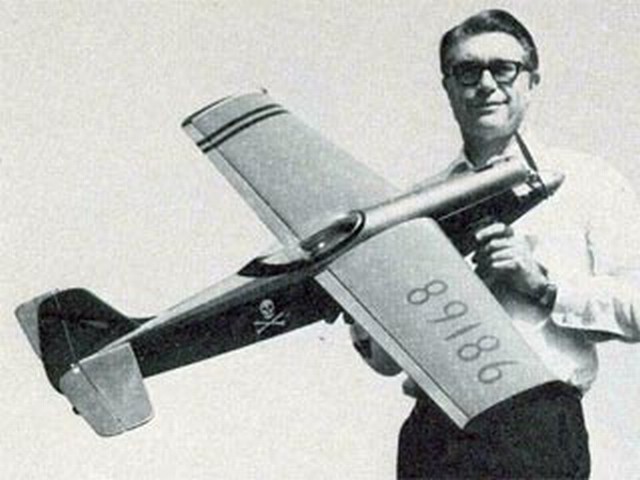