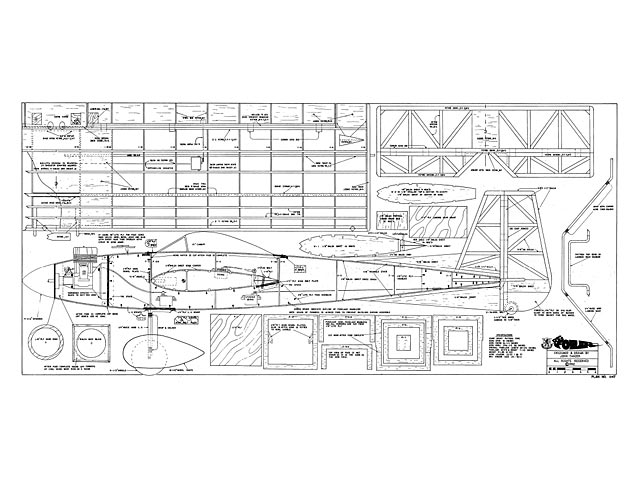 Big Foiler is an enlarged version of my original design Foiler which was published in Model Aviation, May 1991. The Design concept of the Foiler is for a plane that is inexpensive, lightweight, simple to build, will do the pattern, and still be docile enough for the novice flier. The wing, tail, and engind are on the centerline, all at 0°. The fully symmetrical, airfoil shaped fuselage (which gives the plane its name) adds quite a few square inches of lift.

In knife-edge flight, it doesn't take much rudder deflection to fly the airfoil shaped fuselage. Too much rudder will cause it to stall and sink slowly. The wing, using sub spars, is lightweight and very strong. Don't let all the sub spars deter you from building the wing. It is lighter, easier, and faster to build than a sheeted D-Tube and capstrip wing. Once covered, it is just as rigid and warp-free. The rudder, fin, and subfin make for an arrow straight flying plant. Directional stability is phenomenal, and yet when you want to do some-thing wild, it responds immediately. Lomcovaks, snap rolls, knife-edge, inverted flight, rolling circle, point rolls, slow rolls - it will do it all. Yet, stall speed is very slow.

Big Foiler was designed for the 'Big is Better Bunch.' With an 81 inch wingspan, it meets IMAA guidelines, and at a weight of 13-1/2 lbs, it is very lightly loaded. I used a Tartan Super Glow Single in my Big Foiler. The Tartan is very short from mount to prop, so I moved the fire wall forward from what is shown on the plan. The fire wall on the plan is set for a Q-42 or G-38. Using a bigger engine than these would be overkill.

The parts count is low and the structure is quite simple. By referring to the plans, photos, and construction notes, you shouldn't have any trouble building Big Foiler.

Construction. Wing: Make a rib pattern from See-Temp. Then, cut one W-1 rib from 1/8 balsa sheet. Sand it to the right shape. Check all notches for fit. When you are satisfied that it will make a good master rib, soak all edges with CA to harden the edges, and mark the top with the letter 'T'. Cut the rest of the W-1 ribs and mark the top, which will ensure that the notches will lineup. Stack all the ribs with the master rib, and sand to shape carefully..." 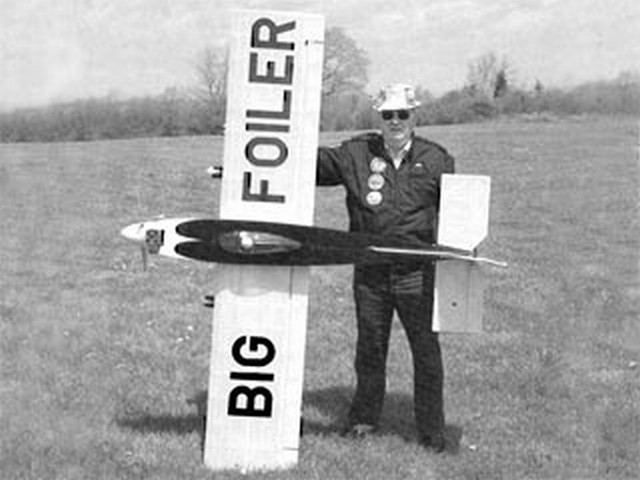