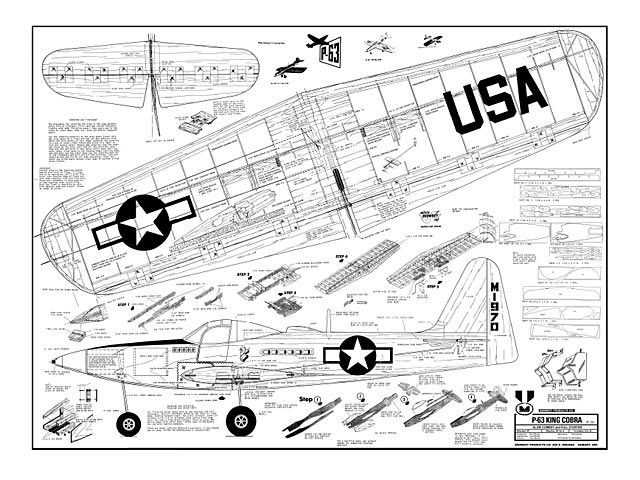 Quote: "Hello Steve, Here are the plans for the P-63 King Cobra 48in wingspan by Midwest . I have cleaned and unskewed this plan. This plane uses .35 to .40 engine for power. This plane was the one by Vince Micchia that was kitted by Midwest as Vince had a previous set of plans for the P-63 KingCobra published in a modelling magazine earlier for slow combat that featured fixed flaps."

ATTRACTIVELY and strongly packaged, this kit is for a profile-fuselaged, semi-scale version of the American P-63 King Cobra fighter of World War II. The 48 in wingspan results in a wing area of 504 sq in, while the model is fully flapped and employs a tricycle undercarriage. All balsa and ply parts are die-cut, the plywood parts needing slight help with a balsa knife to separate them from the sheet. The hardware supplied includes pushrod, undercarriage (pre-bent) plus sundry nuts, bolts, control horn etc. but unfortunately does not contain either leadouts or bellcrank!

The reviewer chose a 3 in steel bushed Veco bellcrank for control smoothness, and solid leadouts were used in preference to the flexible type as -this reviewer finds that flexible leadouts (control-line wire) and a steel bellcrank do not mix, resulting in the bellcrank cutting through the flexible wire in time. A clear bubble cockpit is supplied, together with a generous, high quality transfer sheet. Unusually for American kits, the plan is 'ull-size wth step-by-step construction illustrations - it would thus be possible to build another model straight from the plan. Although the balsa in the kit has a smooth finish, it was all of rather a hard grade. This may make die cutting easier, but it fails to work wonders with the overall weight of the model. To give some idea of the balsa grade, the 1/2 in sheet fuselage blank plus 1/8 ply doublers and 3 in long hardwood bearers weighed 10 oz. This would have been better at 6 oz! All parts were pre-slotted with the leading and trailing edges already machined to section.

Wing Construction: The wings feature pre-formed and slotted leading and trailing edges, together with a slotted, full depth 1/16 sheet spar - no leading edge sheeting is employed. On beginning construction, the first glaring fault came to light: the slots in the trailing edge did not line up with the plan, being progressively out of line, making the wingtip rib 3/8 in past the position shown on the plan. The same situation prevailed for the spar; but more was to come. Not only did the trailing edge and spar not align with the plan, but they did not align with each other. Therefore, the pre-cut slots in the main spar had to be enlarged and the resulting oversize slots filled with 1/16 sheet. Having solved this problem, the wing fitted together quite easily.

In order that the wing panels be warp free, aligning jigs are supplied. These are from hard e in. sheet balsa, but proved useless in this case as they split when pinned to the building board. The jigs (4) would have been better made from 1/8 sheet - perhaps die cut from the solid 1/8 sheet wing tips? Leadout wing tubes were not supplied - another item which had to be found. When finished, the wings proved torsionally stiff with adequate thickness for stunt flying, but uncommonly for present-day stunt practice, there is no long inboard wing panel, sweep back on the leadouts, or wingtip weight to aid line tension. The reviewer, however, included 3/4 oz in the outboard wingtip as a precaution.

An instruction on the plan stated that the wingtips should be built onto the wing after passing the wing through the fuselage. Unfortunately the illustration next to this text showed the wing mounted undercarriage in place. It would seem that it should be the undercarriage and not the wing tips which should be added after passing the wing through the fuselage. The kit was not exactly in the expert's class, more an intermediate model, and therefore the above instruction could very easily mislead inexperienced builders.

Fuselage: This consisted of a 1/2 in thick balsa blank with 1/8 in plywood nose doublers and sandwiched hardwood bearers. This body blank needed trimming to length at the rear, and although the hole for the wing was undersize this proved a good point as it allows trimming, therefore ensuring a good wing-to-body joint.

The tail and fin were from 1/8 hard sheet, nylon ribbon being used for hinging, together with a nylon control horn (supplied).

Undercarriage: A tricycle undercarriage was employed, the main legs being wing mounted using the torsion bar principle commonly employed by R/C models. The legs were placed in grooved hardwood mounting blocks and retained with metal plates and wood screws (supplied), the whole unit being mounted on the ribs adjacent to the rear of the main spar. The nose leg was clamped to the body with a small nylon clamp and two wood screws (supplied).

Flying: The model was powered by a Veco 35, turning a 10 x 6 Tornado nylon prop. An R/C type 6 cu in clunk tank, held to the body by wood screws and neoprene tubing, proved effective. Test flying took place over grass on 50 foot lengths of light Laystrate lines for safety. This length of line gave the model a slow, full FAI, stunt performance. On a calm day, lines could be increased to 60 ft with safety, which would allow the model a more precise pattern. The model was slow flying, and with just wingtip weight and offset rudder only gave adequate line tension. The completed model weight was some 45-1/2 oz, which included 1 oz tail weight to bring the CG to the correct location.

Conclusions: This is not a model for the beginner, nor would it be used by the expert stunt flier in competition. It would, however, make an excellent stunt practice model, or sport stunt flier. The overall shape appealed to me enormously as did the tricycle undercarriage (I am of course a devotee of tricycle undercarriage models, and always use this type of landing gear on my competition models.) The flying ability and looks far outweighed the building problems mentioned and I was highly delighted with the end product. The photographer, Peter Rivens, also flew the model endorsing my opinion - I would recommend this kit to anyone with building experience who also wishes to try his hand at stunt flying." 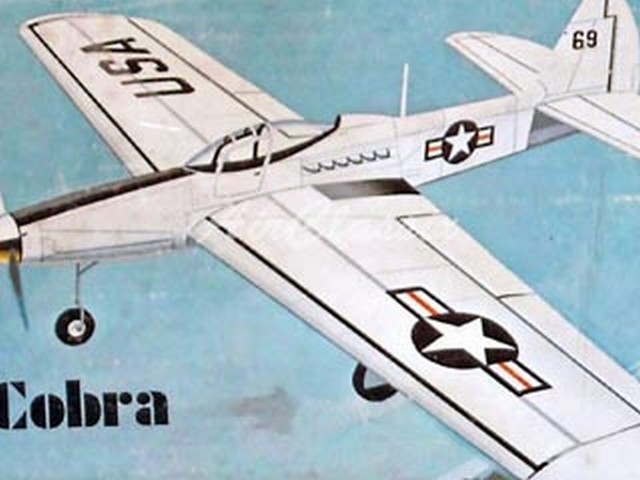