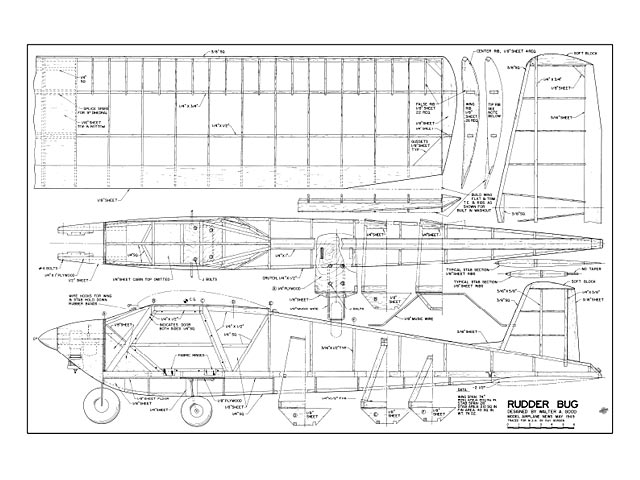 The Rudder Bug was originally first published in May and June 1949 MAN, with the article in 2 parts. See supplement file for this original article, which includes unscaled drawings.

MAN then also later reprinted the plan and article as a nostalgia feature, titled 'Golden Oldie #6' in Nov 1979 MAN. This included all the original article text, but also now showed the plan as a single fullsize drawing (much easier to read than the 1949 drawings).

Quote: "The Rudder Bug exemplifies the new trend in radio control models - simplicity. It is a far cry from the prewar 'giant' RC models and a pleasant departure from free flight gas RC conversions. Here's a model designed especially for existing radio equipment.; it embodies many design features which are unique for radio control models.

In recent years it has become steadily apparent that the radio control gear is no longer the limiting factor in controlled performance. Strangely enough the number one problem is the design of the model! The general impression of radio control builders at the 1948 Nationals was that final performance depends about 75% on model design, and 25% on radio gear - of course, with lots of practice added.

Thus, since model design has assumed such importance what are the design factors involved? Briefly they are: overall size and payload, stability, number of controls, enigine power, accessibility of gear, power-on and power-off characteristics, landing gear, and ruggedness. These factors are discussed in detail below.

The Rudder Bug has almost 6 sq ft of wing area, the wing spanning 6 ft with a 12 in chord. It weighs in at 74 oz, which includes 16 oz for the radio gear. The 1 lb payload is easily carried. The body has a semi-scale appearance with a cabin which sports two king-size access doors. The length is 49 in. The tricycle landing gear makes for good take-offs, and landings too. Power is an inverted DeLong 30. The radio control gear is a standard Beacon Electronics set, consisting of a transmitter, receiver and rudder escapernent. Only rudder control is used which has been found to be very effective, hence the name Rudder Bug.

The Rudder Bug was in the drawing stage for several years. Almost a year of limited spare time was consumed in the building - it wasn't quite complete in time for the 1948 Nationals! During six months of flying, the ship has logged 63 flights and verified many of the design ideas involved. Now let's talk about the design.

Large RC models (above 8 ft span) are certainly beautiful flyers, demonstrated by Charley Siegfried and others. They, unfortunately, do have two distinct disadvantages.

It has been observed, however, that they rapidly shrink from view during flight maneuvers, giving the operator the feeling he's controlling a small dark blob rather than an airplane structure. Small models may have difficulty carrying the necessary radio gear with ease. The 6 ft size of Rudder Bug is felt to be a reasonable compromise. Note how this size lends itself to conventional types of consiruction.

Good longitudinal and spiral stability are prime requisites of the radio control model. For this size model, Frank Zaic suggested that a 25% stab would be ahout right for a quick longitudinal recovery. This has been verified in the air. The high lift NACA 6412 wing section is set with its bottom at 0° incidence. The CG is at 37% of the wing chord, and the stab is set at -2.5°. During tests, the CG was varied from 25% to 40% accompanied by the corres-ponding stab setting, with the above figure giving the best recovery.

The good spiral stability of the model is attributed primarily to the proper relationship between dihedral and fin area, plus the washed-out wing tips, which reduce wing tip drag. The wing has 9° in each panel, or a total of 18° dihedral. The fin area is 5%. The wing tips have a built-in negative twist of about 2.5° which also helps prevent tip stall and promotes clean recovery.

How many controls should a radio control model have? The author believes that if you want to spend lots of time in the air and very little on the ground, then you should choose the most effective control combined with the greatest simplicity and reliability. Currently, the author prefers rudder control. It must be pointed out that the infancy of the radio control game has not allowed real standardization of 'the' final system. Many other systems suggest themselves. Rudder with coupled elevator to give tight nose-high turns looks good. Maybe ailerons alone would do? A butterfly tail with its combined rudder and elevator could be worked out. The 'Rudevator' of Owbridge and Schumacher has been perfected and gives coupled turns plus up-and-down. These are but a few of the possibilities. Many flight tests of these and other ideas will be required before standardization occurs.

The fantasy that radio control ships need large engines was finally dispelled at the 1948 Nationals, where several ships appeared with Class B engines! The Rudder Bug mounts a DeLong B which does very nicely; in fact, on some flights it would have been desirable to throttle it back after reaching maneuvering altitude. The important point is to use a steady, reliable engine - not a host of power. After all this is not a screaming contest ship!

The accessibility is measured by the ease with which you can get at the receiver, the batteries, the escapement, and the wiring. Two large doors, one on each side of the cabin, give entrance to the receiver and battery compartment. Converted free flight designs usually cannot afford such large access openings because their structures would be too greatly weakened. The doors, which hinge along the bottom edges, allow quick checks of battery condition and adjustment of the receiver. The escapement and its linkage are mounted within the fuselage just be-low the fin and are reached through the bottom of the fuselage when the stab is removed. The escapement rubber band threads forward in the body and is wound through the cabin door. Winding once a week is recommended! Removal of wing and stab does not interfere with any of the radio installation, thus you need only the fuselage for radio testing, a handy consideration in a small workshop. Be-cause the cabin roof is covered, there are no dust catching holes when the model is stored. This also protects the sensitive relay contacts from excessive contamination..."

Note: For an alternate full-size drawing of the early Rudder Bug (also at 74in) see the Aeromodeller Rudder Bug (oz6998) plan from Jan 1950.