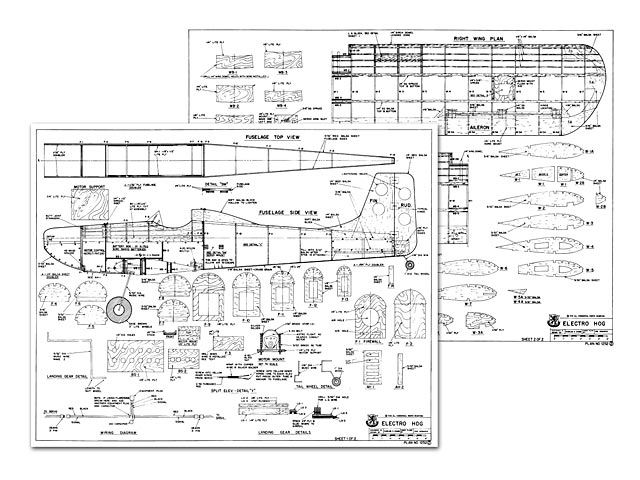 Many years ago, my very first low-wing aileron model was the Astro Hog (oz4756) by Fred Dunn. As a neophyte on the sticks, it didn't last too long. We regressed to the Smog Hog (oz671) and had better luck. I was most fortunate to own the leading reed system at the time, Orbit was its name. One needed to have fast thumbs bumping the control switches. I finally got in a few good flights after some instruction, and then installed the equipment into the Astro Hog.

The learning process was long and tiresome. Finally, swallowing my pride, I asked for help and instructions again. A beginner should not be embarrassed to seek help in his club. Nearly all clubs nowadays have appointed a competent flight instructor.

A few years ago, I was doing some hangar flying with a friend, Dr Dan Williams DMD, and I brought up the need for a set of plans for the Astro Hog. Dan went to his pile of plans and, wouldn't you know, he came up with a tattered much-used set of plans. From that time until the present, they lay in my pile of plans. I got the urge to build one for a cobalt 40 geared motor. The original had a wing span of 72 in which is too large for the 40 to do justice to the plane. So, after some deliberation, it was decided to make the span 63 in. A few changes were made to update the craft, but the stab position was retained and the profile of the Hog duplicated. I've seen the modernized one with the stab raised to the datum line, but this one is scale to the plans, except it is solid balsa and flat plane in construction. A 1/4 in dowel was used for the leading edge of the wing since I believe it is the strongest and lightest method around.

Construction. My personal preference is to, first of all, make a kit of parts before starting to build. This is the time the builder must carefully choose his building materials to prevent the weight of the craft from building up. Light wood for non-stress areas, and strong, hard for stress areas. You may notice that the wing has four spars. Spruce was used for the front spars and balsa for the rear - just my personal preference, not some magical reason.

Wing. The wing usually takes the most time and since I'm the builder and prefer to get it out of the way, that's where we start. The wing is pretty straightforward, the only unusual feature is the hold-down to the fuselage using two 1/4 in dowels in W1B and the 1/4 in dowel leading edge. Fashioning the wing rib leading edge is done with a 1/4 dia saw file. A few strokes with the file and it's done. The leading edge dowel will slide into place with absolutely no problem. I hope you will like this method of building the wing. The wingtips are a bit unusual, but they are strong and very functional.

The landing gear block is made from 1/4 and 1/8 lite ply with a 1/32 spacer to make the side rails to match the 5/32 diameter landing gear. The landing gear is bent to the outline on the plans. The wheel axles toed inward about 2°. This aids the plane in the take-off mode..."

Update 24/10/2020: Replaced this plan with a clearer copy, thanks to theshadow. Also replaced the article file with a clearer version, that now includes list of materials. 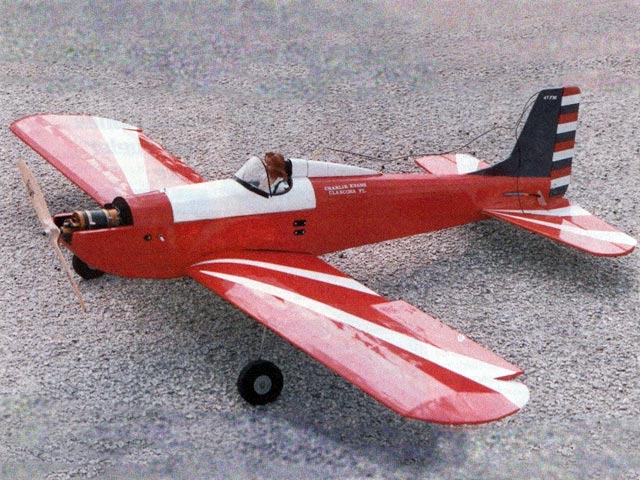