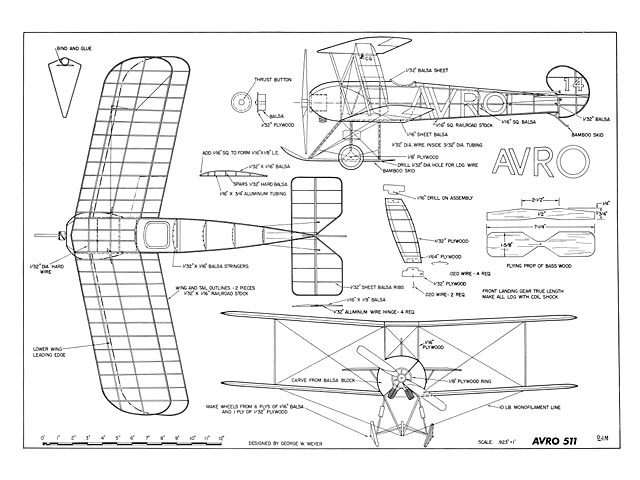 Quote: "During the year before the start of the 1918 conflict, the idea of a specialized type for use as a fast scout in war had taken firm root in the minds of several designers; among them AV Roe, who had by this time given up most of his active flying to concentrate upon design. His thoughts upon the subject appeared in the form of the 'Arrowscout,' the new machine being shown on the Avro stand at the 1914 Olympia Aero Show, where it was seen to embody a number of original and advanced ideas.

A single bay biplane layout was adopted, with considerable sweepback being used on the wings, the lower surfaces of which were flat. Slight dihedral was incorporated and the upper and lower wings were connected by single close-set pairs of light-weight interplane struts which were faired between with fabric to form 'I' struts. 'N' center-section struts formed the rest of the wing supporting structure.

Another unusual feature was the fitting of air brakes at the lower rear wing roots, consisting of rectangular trailing edge surfaces which were hinged at their center-lines to stand vertically across the airflow. The 'Arrowscout' qualifies as one of the earliest airplanes to be fitted with them. Lateral control was provided by cable-connected ailerons on all four wing tips. The remainder of the airframe was strongly re-miniscent of the '504' on a reduced scale.

Power was provided by an 80 horse Gnome mounted within a cowling which proved to be too closely fitted for adequate cooling. Yet another feature of the 511 was the Avro system of unit construction which conferred quick dismantling and re-erection within a few minutes. The pilot also had the benefit of the Avro safety belt. The Avro 511 Arrowscout as a model design has close to ideal proportions for rubber powered Free-Flight Scale. With the large amount of sweepback, there is no problem in getting the airplane to balance properly.

Construction Notes. The fuselage is assembled using 1/16 x 1/16 railroad stock for longerons and 1/16 square balsa for the uprights. The landing gear is on 1/32 dia wire with 1/16 plastic tubing slipped over the wires and mashed to a steamlined shape in a vise. The engine cowling is carved from a balsa block hollowed out to approximately 1/8 wall thickness. A ring cut from 1/8 plywood is glued into the front of the blocks to hold the dummy crankcase..." 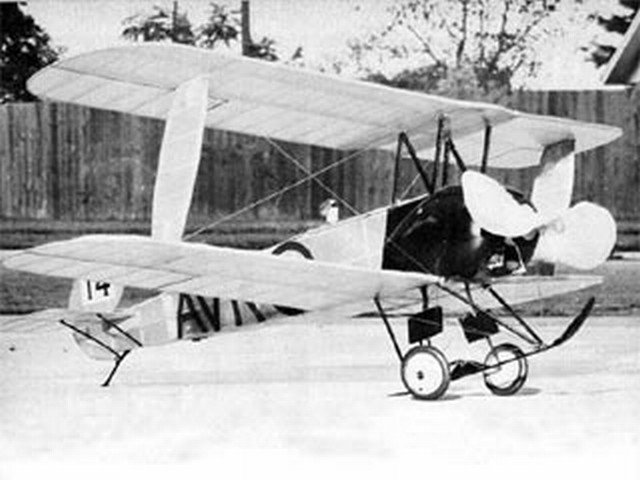