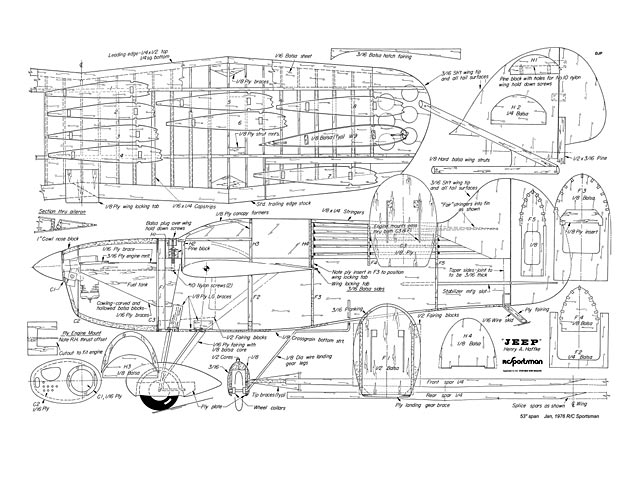 Quote: "Here's proof that a good looking, good flying scale machine doesn't have to be a 'monster' to build. Art Chester's Jeep, by Henry Haffke.

The Chester Special, as it was first called, was raced from 1933 to 1938. It first appeared in green (with cream trim) wearing race number 15. In 1936, the little racer was completely overhauled, and was finished in overall cream, with green and black trim. It was renamed the Jeep after the Popeye comic-strip character. The fast little machine's race number was 3 in 1936, 2 in 1937, and 5 in 1938.

The racer was very small, having a 16 ft 8 in wingspan, and a length of only 15 ft. Its first win was recorded at 154 mph and various changes improved its speed to 237.033, when it set a new world's light-plane record at the 1935 All American Air Races at Miami.

My model is finished as the Jeep appeared in 1937, when it won the St Louis Memorial Day Race. That racing season, it attained its highest official speed-253.5 mph. The cost of building the Jeep was $5,000 and, by the end of the 1937 racing season, it had, in five years of racing, earned a total of nearly $30,000 in prize money. This averaged out to about $520 per hour of flight time. The Jeep was retired in 1938 and a new Chester Special, called the Goon, made its appearance. The Jeep, completely rebuilt and hardly recognizable as such, was flown to victory in the consolation race of the 1947 Goodyear Trophy Races as Bill Falck's Chester Special.

As a young boy, I lived about a mile from the old Springfield Airport, where the Granville Brothers were building their famous Gee Bee Racers. I have always had a great love for racing planes. My first gas-powered model was a 25 in span, scale model of the Jeep with an old Bullett motor. I drew my own plans from a three-view in an old magazine, and crashed the model less than a lap after its first takeoff. No one had told me that this was not the way to start into powered modeling. I learned to fly CL, and then rebuilt the Jeep - I still have it after 25 years.

I always intended to scale up a larger model of it, but kept putting it off. I then became involved in RC flying and, after learning on some good trainer types - I still have my Tauri (oz5162), which was my first multi - I built a full-house scale model of the Ryan ST from some old magazine plans. The model has a 60 inch span and weighs 7 lbs, powered by a K&B 19! It flew fine, but it took a half a tank of gas to get it up high enough to do anything with it. I installed a larger engine, which required a completely new front end. This left me with a beautiful cowling into which I had put a considerable amount of work. Now I needed a new airplane behind my leftover cowling.

Art Chester's Jeep had the same Menasco engine installation as the Ryan ST, so the cowling is very similar. Here was my chance to use the cowling and, at the same time, build a larger version of the Jeep. Doing some calculating, I found that a Jeep scaled up to fit my unused cowl would give me an aircraft with approximately a 50 in wing. I figured that this would be small enough to fly on the 19, which was firmly imbedded in the cowling. I felt that the jeep would be a poor subject for RC flying, but I wanted to build it anyway. My doubts about its flying qualities were completely dispelled on its very first flight.

I enlisted the help of a test pilot for its first flight, as I felt a more experienced flier would be better at the controls. Sid Clements did the job for me, as he has on several of my other models. Even though the model was badly out of trim, he flew it for about 7-8 minutes, doing a variety of maneuvers. The model had a bad left-turn tendency and was very nose heavy. A few turns of the clevises remedied this situation and, after a few flights, we had everything set correctly.

The sleek little racer is a beautiful thing to see in the sky. It is very easy to handle and the landings are unbelievable to watch. I have to hold just a little left rudder on the takeoff run to keep it straight, which is probably due to the engine offset. It flies so well that I haven't done any further experimenting with trim changes.

I flew the Jeep in the Eastern Championships at Johnsonville, PA in the fall of 1971. It was the first RC contest I had ever flown in and even though there were a set of very shaky fingers on the sticks the model won the fourth-place trophy. Since that time, the Jeep has been flown in many contests in both AMA and Standoff events and has won many trophies. It has been flown all over the northeast and is a real crowd pleaser. It has, on several occasions, scored the highest flight score of the day, attesting to its fine flying qualities.

The K&B .19 flies the model quite adequately but some of you may want to use a .29 or .35. With the .19, a loop requires a downhill entry. The model will snap roll and spin like crazy. It really gets wound up in a spin but recovery is instantaneous upon releasing the rudder. The model has unbelievable ground-handling characteristics. Even with the fixed skid it will maneuver all over the place on the hard top or grass. In four seasons of flying it has not once gone up on its nose except during the testing stages where the wheels were spreading out and grabbing the inside of the wheel covers. Takeoffs and landings in the grass are no problem, however, in a stiff wind it must take off directly into the wind. The Jeep slows up nicely on low throttle and has a very flat glide. I frequently take the Jeep out just for an afternoon of fun flying, and several other pilots have enjoyed flying the model.

The model is very easy to build, and there are only a few things that need mentioning. The wing is very easy to put together if you go about it in order. Because of thestrange shape of the wing, it is necessary to follow the following sequence..."

Quote: "Steve, Here's my scans of Henry Haffke's 53in span Chester Jeep plan & article, as published in January, 1976, RC Sportsman. I believe Coverite's Chester Jeep kit (oz7936) was developed from this plan. This was later also published in March 1979 RCM&E - I don't know if there were any significant differences. Keep up the good work!" 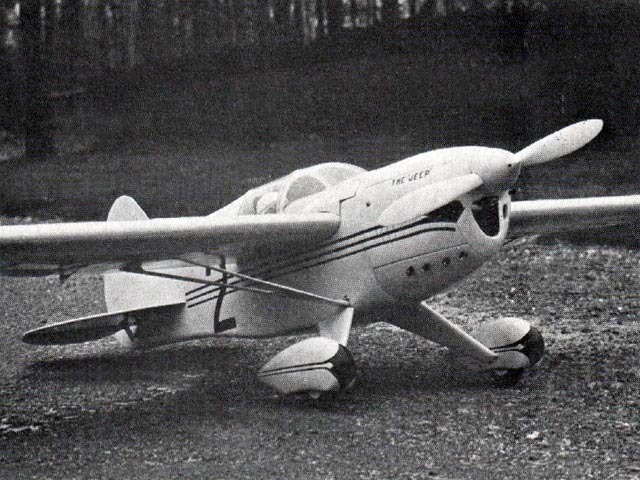