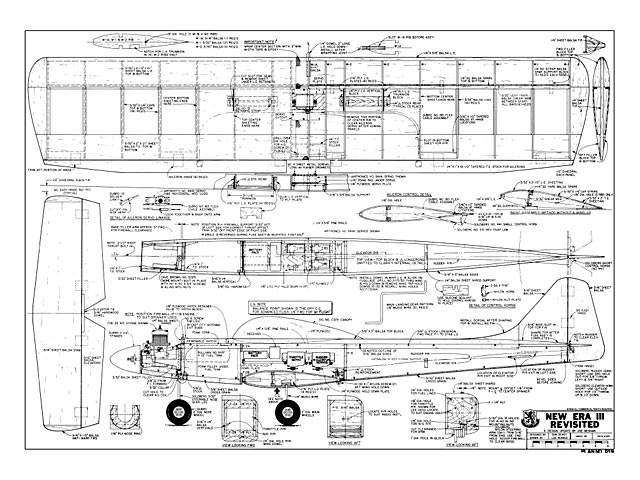 An interesting story, I hope, from whence it came. Initially, as a member of the 10-70 Repeater organization, an amateur radio operators club, a member approached me, knowing of my interest in R/C modeling, and offered a partially completed R/C model which he said he had started a long time ago, and was sitting in the rafters of his home. He further explained that he was about to throw it out and, if interested, he would be happy to give it to me. At first I said I wasn't interested, as I like to build my own models. When he told me the address where it was located, which, coincidentally, is on the way to our flying field, I thought I would pick it up and give it to one of my modeling friends to complete.

Accordingly, I picked up the model, which was bare bones and partially complete. I didn't recognize it as a model I was familiar with and took it to the field. I asked if anybody wanted it and, by golly, there wasn't any interest; so I threw it in the trunk of my car, brought it home, and let it sit in my garage. Sometime thereafter, I came across it and debated whether I should scrap it. A closer look cultivated my interest; I did have a .25 engine which I could use for power. I visualized its development for completion and realized I probably could add enough to complete it. It was a challenge - the more I observed it, the more interested I became, to the point where I decided to go ahead and complete it, which I succeeded in doing.

At this point. I still didn't know what the airplane was and, subsequently, took it to our club meeting and the flying field and asked around if anybody could recognize it, but without success. I proceeded to preflight, check it out, and flew it. I was absolutely amazed at the performance of

the model. 1 found that it grooved and pen etrated perfectly; it went exactly where you pointed it and did each and every maneuver that you called upon it to do, from sustained knife-edge flight to verti-cal maneuvers of any type. Yet. it would slow down and drag in nose-high at a landing rate so slow that it was hard to believe that it was still airborne. I recognized it to be equivalent to any .60 powered pattern aircraft. I let some of the proficient fliers at the field fly it, and they agreed that the performance was outstanding and comparable to .60 performance. I kept searching for somebody who would recognize the model, and finally, who else but my electric flying friend. Ben Bendit. recognized it as The New Era III (oz5188) and remembered it was published in RCM and kitted by Airtronics. I flew it. flew it, and flew it, and finally one day, coming in on approach, believe it or not, one of the ailerons fell off due to failure of the hinges. The model impacted into the ground for a total loss. Overly impressed with the model. !decided that I was going to build a new unit from scratch.

I found that Don Dewey, the founder of RCM, was the original designer of the New Era III, and that Lee Renaud developed the construction details and later kilted it at Airtronics, and no other than Dick Kidd drew up the plans. (Others such as Chuck Cunningham, Bill O'Brien, and Carl Mass made contributions.) Originally, the New Era III was published in 1975, a period where I was involved in the Old-Timer movement; in fact, serving as President of the Society of Antique Modelers (SAM). As I think back. Don Dewey was also very helpful in the growth of SAM; when I contacted him during that period and asked whether SAM could get a column in the magazine he very generously donated a page monthly which helped promote the R/C Assist Movement in Old-Timer activity. contributing to its very predominant and important part of the SAM organization. I recall. he built and was flying a Scientific Mercury. Don could always be depended on.

All and all, these memories have been very joyful for me, and I trust that you will build the 'New Era III Revisited' and find it as enjoyable to build and fly as I have. I proceeded to check with RCM for further details and found, of course, that Dick Kidd was familiar with the New Era III, as he originally drew the plans for the model. He also advised that the plans were still available at RCM and sent me a copy.

Some of the 'Besharizing' follows: The plans were detailed with a .19 engine and I changed it for a .25. At the time, I noticed that Fox Manufacturing Company had just released the Fox .25 ball bearing engine to a new product offering and I proceeded to acquire one, as I thought I would use this new engine in the New Era III Revisited. I ran some ground tests on the engine mounted on a block. It performed extremely well with a 9 x 6 APC propeller, turning about 13.500 rpm. Accordingly, I decided to use this combinnation on the final model.

I increased the fuselage length to accommodate the Fox .25 engine; redesigned the aileron pushrod arrangement by eliminating the hellcrank set-up; used flexible braided Du-Bro cable with nylon enclosures; changed the aileron mounting details; and employed the Airtronics #94141 servo. This servo is perfect for use with the ailerons as it has horizontal lugs molded on the servo case, which I found extremely helpful for mounting the aileron controls.

The one panel of the wing is built and, when dry, is propped up 1 in, then the second panel is built against it for development of the dihedral. The wing leading edges are shaped from 1/4 by 3/8 balsa stock. The wing ribs are cut from 3/32 sheet balsa. Ideally, you can stack and cut them on a band saw, then sand to the outline as necessary; notch the spars and drill the 3/16 diameter hole as shown in the rib schedule on the plans..." 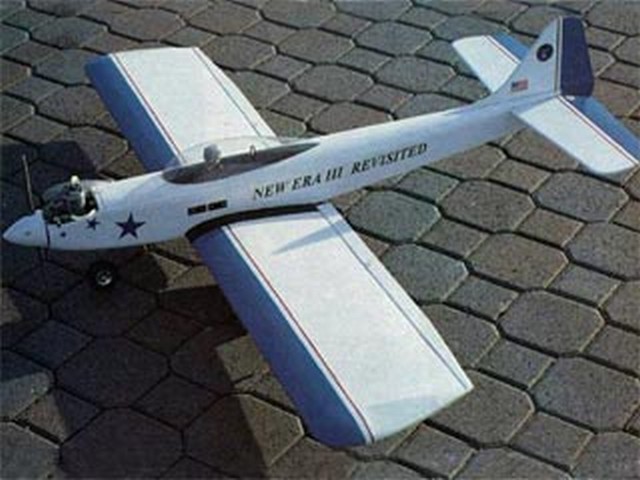 This is a great plan with lots of detailed, along with an informative article from RCM magazine. See my detailed build blog for this aeroplane, which is powered by an Irvine .25, on YouTube - New Era III Revisited - RC Balsa Aeroplane Build Series: https://www.youtube.com/playlist?list=PLGILJsUw3dvRwa0eT_nr20BA4jvEr2WE8
Mark Robinson - 23/04/2021
This model airplane is very beautiful.
Vagner - 18/06/2021
Add a comment