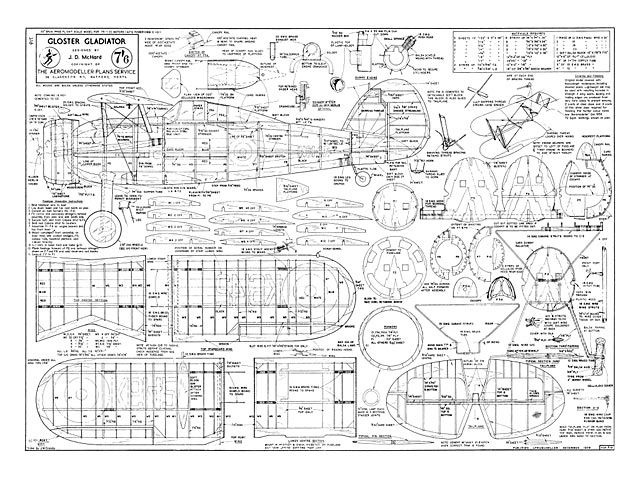 Quote: "Doug McHard's Gladiator which made its debut at this year's Nationals has been the object of many a scale fan's request over the last six months. In its pristine silver colour scheme with 72 squadron markings it has attracted a great deal of attention wherever flown, and its characteristic flight with the muffled exhaust note coming through genuine scale pipes have made it both look and sound the part of the last of the famous biplane fighters.

Here is a subject for the ardent scale enthusiast who wants perfection or the man who has made a model or two and would like to try his hand at scale. It is a docile model, and one which will achieve great popularity in years to come.

All constructional details are given on the plan and provided they are carefully followed no difficulty should be encountered. The sheeted front part of the fuselage can be covered in wide sheets of medium balsa as there is very little double curvature present, moisten the outer surface of the wood to facilitate bending. Joins between sheets should be arranged to come over the keels and 1/8 sq stringers. A slow-drying adhesive of the Le Pages PVA type will be found to be of great assistance during this operation. Araldite was used on the original rnodel for all hardwood jointing such as undercarriage ply fairings and motor bearer fixing, strength is enormously increased and the extra time required for drying is worth while.

A sliding cockpit cover is of course optional, but adds considerably to the final appearance. The cockpit may be completely equipped and a dummy pilot included (from soft balsa) as desired. Details will he found included in the 3-view drawing in our 'Famous Biplanes' feature.

The exhaust system is also optional, but if used is very effective and also helps to keep the model clean by leading surplus oil out of the motor cowling. Covering on the original model was heavyweight Modelspan, although in view of the light weight of the finished job, silk will be used when recovering becomes necessary. Silk covering will increase the 'hole resistance' considerably, but if used pay particular attention to the wing and tail structures which should have very hard spars and leading and trailing edges throughout. The 2-1/2 inch thin-tyred wheels presented a problem which was surmounted by using the tyre from a 2-in 'Roadway' wheel with the internal ridge cut away, stretched over the larger hub and fixed with Evostick to prevent splitting.

Before flying, check incidence angles and engine thrustline carefully and set elevator to neutral. The fuselage should be horizontal when the assembled model is supported under the wing centre section at the point indicated on plan. Slight nose heaviness is permissible, but NOT tail-heaviness! A flat glide should result from a gentle level launch. Trim out with elevator. When satisfied, cement and pin the movable surface before power flying. The model should fly left-handed circles under power and glide to the right."

Update 27/11/2016: Replaced this plan with a clearer copy (aligned and cleaned) thanks to Pilgrim.

Alternate version. This is a modern redrawn plan in PDFvector format by hogal. Direct submission to Outerzone. 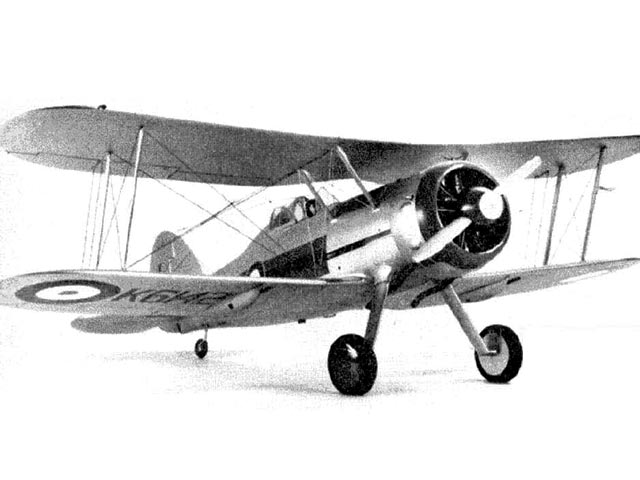