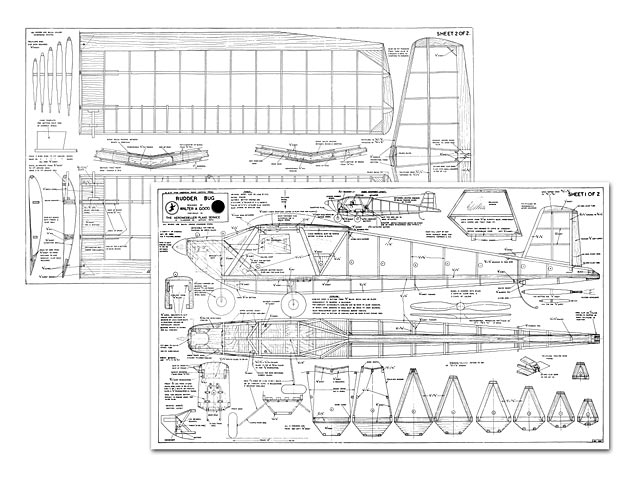 Rudder Bug. Classic radio control model. The Rudder Bug (oz7009) was first published in MAN, May 1949. This here is the plan and article as it appeared a few months later, in Aeromodeller.

Quote: "A 6 FOOT SPAN RADIO CONTROL MODEL Designed by Doctor Walter Good. With acknowledgment to Model Aeroplane News. The designer won the 1949 American Nationals Contest, flying Rudder Bug on rudder control only. In addition to his numerous radio control activities, where he is acknowledged leader of the field, he is also Chairman of the AMA Rules commitee - where he has the unenviabIe (and we surmise impossible) task of trying to formulate rules to the satisfaction of American modellers.

THE Scene - A late October afternoon with a hint of winter in the air, just a vestige of wind and a small group of figures gathered anxiously around a model. Occasion - first test flight of a brand new 'Rudder Bug', resplendent in blue and yellow dope.

Satisfactory glide tests having been completed we were trying our first power flight with the model unladen, not without a certain amount of trepidation on the part of the test team. A suck-in and a flip, and our Yulon was cracking in its customary style. A jerk on the battery leads, a final adjustment to the motor, and the writer was cantering across the grass for a running hand-launch. The model dipped a shade as it sought its correct laying speed and then up went the nose in a steep climb - Horrors, it must stall! But no, up comes the tail, she levels off and then more climb and still more climb. Soon the model is six to seven hundred feet up turning in leisurely circles and appearing practically stationary as it meets the almost imperceptible breeze. The writer was by then sadly reflecting on his underestimation of the Yulon's fuel consumption under free flight conditions, and Rudder Bug, a mere speck in the distance. It was eventually recovered some three miles away where it landed safely apart from a thorn-punctured tyre in a field.

Well there it is. You have oft heard that much maligned expression 'it flew straight off the board' but so help me, hand on my heart and the editorial hat raised to Doc Good, this Rudder Bug of ours certainly did. Absolutely no trimming was necessary, the model flying exactly 'as per'. Laden it loses the steep climb and gains altitude at an ideal rate for R/C purposes. Almost impossible to stall it is barely influenced by torque and will fly dead straight with the minimum of trimming. Stability is first rate yet it is extremely sensitive to rudder movement and generally fulfils all the requirements the Designer intended. As far as. the writer is concerned Rudder Bug has the most delightful flying characteristics of any power job he has yet flown, and although serving as a stooge for his first radio control Rights has not suffered. even so much as a heavy landing to. date, which, as someone remarked says a helluva lot for Rudder Bug

Writing in Model Airplane News Doc Good says: The general impression of radio control enthusiasts is that final performance depends on about 75 percent model design and 25 percent radio gear with lots of practice added. Thus, since model design has assumed such importance what are the design factors involved? Briefly they are overall:

All of these factors have been faithfully met and dealt with to their best advantage in Rudder Bug, which was incidentally in the drawing stage for several years and took a year of limited spare time on the Doc's part to build. Not that the final design, as presented to our readers, involves as much labour. For we ourselves found its construction simple and straightforward and well within the capabilities of the average modeller.

The writer would only add that he was exceedingly fortunate in choosing Rudder Bug for his first radio control efforts. It has completely eliminated any troubles as far as the model side of the question. He only wishes there was a radio control set half as reliable..."

There can be few who would argue that the 'Rudder Bug' was a milestone in the development of the R/C model. Not a free flight design updated with the hindsight of radio assist but a true vintage R/C design, stemming from the Summer of 1949 and first appearing in the British press on January 1950 (back issues of Aeromodeller are long since gone, so don't bother asking!)

Bowmans (late of Ipswich and now in the capable hands of Alan Chatsfield in the West Country!) have produced a kit of parts enabling a perfect (or as near perfect as most would wish to go!) replica of Dr Goods original Nationals winning craft, which by any standards, must rate as one of the most significant models in R/C history.

Walt Good embarked on the design of the Rudder Bug around 1948, endeavouring to formulate a definitive design for R/C competi-tion rather than converting current free flight designs. The plan appeared first in the May/ June issue of Model Aeroplane News in 1949. Plan sales ensured immediate success, 'Rudder Bugs' outnumbering any other designs and eleven examples took part in the US Nationals only two months after publication, Walt himself winning the comp!

British Bug: December 1949 saw the first reference to the 'Bug' this side of the pond when it appeared in Model Aircraft. Jan 1950, as already stated, saw the plan appear in Aero Modeller and it is this very same plan that accompanies the Bowmans kit.

Together with a reprint of the original plan, the kit comprises of all the timber needed to complete the model, much of it strip and sheet but some, like ribs and formers, ready cut. In an attempt to assist the "today" builder of vintage models, a nylon engine mount and a plastic clunk tank are also included.

Omitted, is any reference to 'how to build it' in terms of an instruction sheet - although a photocopy of the original Aero Modeller article can be found in the box. Bowman's argue, quite justifiably, that the original plan contains quite a lot of information (as Aero Modeller plans tend to!) and that there is little point in advising the vintage enthusiast on how to do this or that or even how to convert any area to current thinking, for experience has pointed out that vintage is an area where many will wish to do their own thing! Despite this, I feel that nostalgia is not the sole province of either the elderly or the experienced, and many newcomers to the scene might well fancy the Rudder Bug, yet be unable to complete its construction without considerable outside help..."

Article, with many thanks to RFJ.
Review. 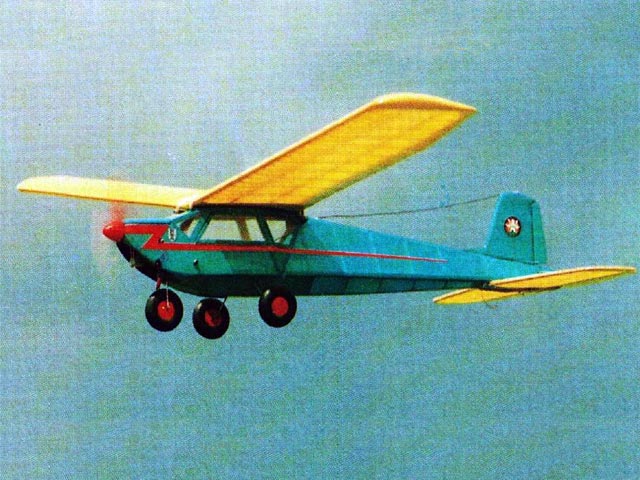