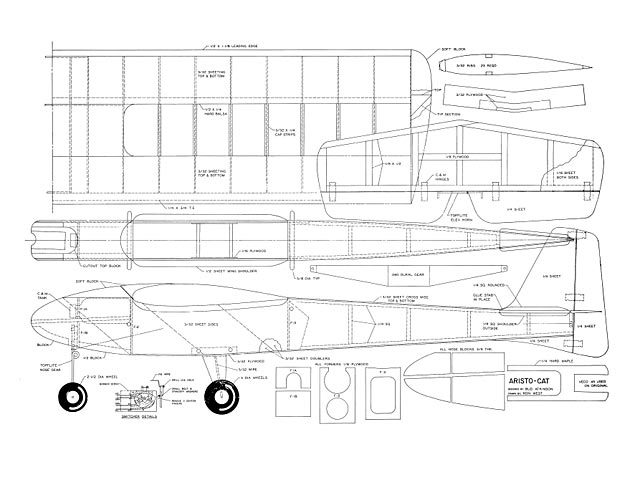 Quote: "Steve, Someone in the wanted section was looking for the Aristo-Cat. Attached is a scan of the plan and article from MAN May 1964. Perhaps you can do something with them."

Quote: "First things first, all respectable Radio-Controlled jobs should and do have a name. The Aristo-Cat was nameless through its many changes until the final stages, when an observer at the old flying site made the remark: This airplane is as light on its feet as a cat. Aristo, coming from aristocrat as being a little better or superior, and as nimble as a cat.

The Aristo-Cat concept goes back to the early days of the 6-channel event which was popular on the West Coast and in the Midwest about three or four years ago, until the old intermediate class was reclassified as Class II. A high-wing airplane was the start, much the same as the Explorer which was a takeoff from the original Smog-Hog. So you see. Class II airplanes do go back a long time. But back to Aristo-Cat! The high-winger left a lot to be desired, especially the outside loops and inverted flights. So a shoulder wing ship was built, several airfoils and wings were used, as well as a slightly modified 2415 airfoil. I wonder if any one ever used a standard 2415 without modifying it! At this time, I must say, the Aristo-Cat is a combination of all the good features of today's many accepted designs with added new twists thrown in. As some one said: There is nothing new under the sun! Just new variations, so be it with the Aristo-Cat.

We now had a good flying plane, good inside and outside loops, fair inverted traits and easy to land but, wait a minute! The rolls looked as if they were being done on a roller coaster with the third roll, 300 feet below the first one. Problem: how to get a rudder elevator airplane to roll as an aileron elevator ship, without sacrificing performance of other maneuvers? Answer: More rudder! Unfortunately, this is not the right answer, as we found out.

With much discussion with the KC RCers and remembering something from my old free-flight days in the 30s and 40s, I came up with a sub-rudder and small fin, and to our surprise this seemed to be the answer. By getting part of the rudder area below the wing and stabilizer wash, it gives more effective area and it has been used on free-flights for some time. Care must be taken not to end up with too much fin area or the airplane will weather-vane and make ground handling rough, also makes the loops touchy.

By then the Aristo-Cat flew fine, but with so many modifications, it was one big patch. So, a new ship with pleasing lines was built and with a simpler fuse. There is no airplane immune to mishaps, we want a ship that could be easy and fast to build in the middle of the contest season. And this is the end result, to date with a full year's contest season under its belt and with 7 first places to the Cat's credit, plus several gallons of go-juice running through its Veco.

The servo-switcher shown is an addition which gives smoother straight flights and turns by giving half-rudder on rudder-control and for rolls, full rudder throw on aileron control. This device was incorporated for us, slow-thumbed old flyers, and does make for a smoother pattern, but is not absolutely necessary for the Aristo-Cat to perform well. This system has appeared in print in many forms but this one is by far the simplest and most foolproof to date, and was developed by my long time friend, Max Boal; also a long time KC RCer. We will not go into detail on how to make the switcher as there have been many articles describing printed circuits.

The sector gear stand off should be free with no bind as this will load the rudder servo. It will be noticed that there is a pulsing of the half-rudder. Everyone that has seen it, wants to know where the pulser is on the X-mitter; this is caused by the switcher circuit over-riding the rudder servo circuit. There is no harm to the servo-circuit or no more than normal drain on the battery pack. Even if the switcher-circuit is broken, this does not affect the normal rudder-servo, as it works out you have a safety factor in that you now have two rudder controls. The switchers weight is less than one ounce and takes up little room.

How to hook up your switches: Drill a 1/16 in hole in Transmite sector gear, like the switcher. Remove the servo cover screws and install the switchers. For elevator: Solder a yellow wire to the yellow single-dot land on the switcher; the other end goes to servo yellow. Solder an orange wire to the orange single-dot land on switcher; the other end goes to servo orange. Solder yellow and orange wires to the double-dot lands; free ends of the wires go to the trim reeds..." 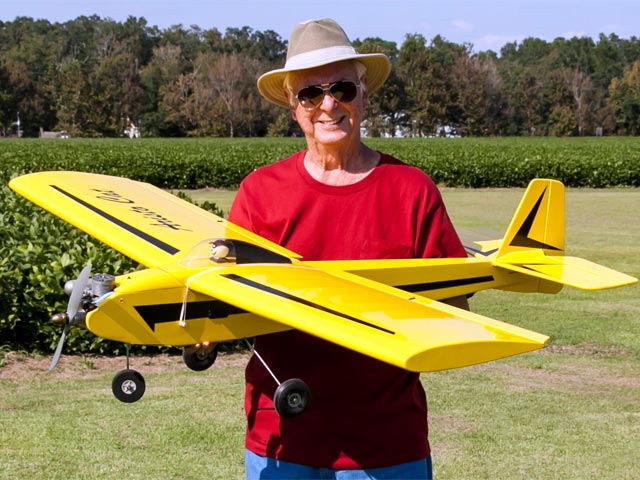 This plane was a revelation when it first appeared on the R/C scene. At that time, AMA competition had three classes; Class I was rudder and engine control; Class II allowed rudder, elevator and engine, while Class III was full house. Many modelers just couldn't afford a full house proportional system at a thousand dollar price tag in 1964, worth about $7500 in inflated 2015 dollars. And most of those radios didn't work anyway, that's why I stayed with single channel. Cheaper, reliable reed systems were the order of the day, and adding another channel for ailerons was a big jump in cost. Therefore, Class II systems were popular, represented at most contests of the day. Yes, the rolls were pretty wide barrel rolls, but the Aristo-Cat was different. It rolled like it was on rails. Nobody believed it didn't have ailerons. Nick Neville brought his 'Cat to our contest in Mobile Ala and walked away with first place. He scored enough points he could have had all the places compared with the other entrants. Of course, the Veco 45, designed by Clarence Lee, contributed to his success. It was simply the best engine ever made up to this point, until the Veco 61 came out later. I also placed in this event, with a small 1/2A single channel model with rudder and elevator, operated by an escapement. I think they gave me some points because I was brave enough to enter. A few years later when radios improved and prices dropped, this type of model fell from favor, but during the early 60's era it was really something.
DougSmith - 06/09/2015
Hi Mary, These are images of Nick Neville with his Aristo-Cat [main pic, 006-012]. He still holds the record for the most points ever scored at an AMA sanctioned event: 1965, Nick Neville, RC Intermediate all ages combined, First, 174 pts. (MAN mag, 10/1965). This is a rebuild of his award winning plane. He added ailerons to this one. Mr Neville used a pingpong ball for a pilot. Mr Neville told me that he wore out a Veco .45 and burned a 55 gallon drum of fuel to prepare for this contest His score was so high because he learned how to do the rolls as if the plane was on a line… the judges told him it was not possible with a three channel to do a perfect roll with his plane, when he did the rolls the judges were shocked that he could do them so well with a three channel plane.
Eric Knieper - 08/03/2021
Greetings, Just finished up an Aristo Cat (plan 6995) and have included a couple of photos [pic 013, 014]. Built from a 60 year-old Midwest kit, dope finish and 3 channel RC. Cheers,
Scott Wallace - 18/10/2021
Add a comment