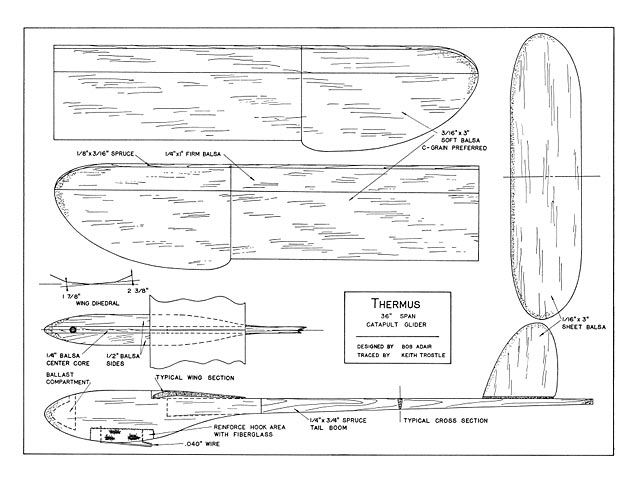 Quote:- "Every once in a while something comes along that just ends up much better than it really should. This is the way things worked out with 'Thermus' the catapult glider presented here. There aren't any standard competition rules so I can't claim that it is a record holder, but on the other hand rating it as a pure flying machine it comes out on the top of my list. I can't remember ever having designed a model that has given me more personal satisfaction and enjoyment than this craft has. Let me relate a little of how the idea for 'Thermus' developed and I think you will be persuaded to give it and catapult gliding a try.

...why should I give up flying gliders just because the old back wasn't up to it when some light string and a piece of rubber band could provide the launch? Well it turned out that by some quirk of fate that my reasoning turned out pretty well as Thermus ended up as one of the flyingest models I've owned. I won't dwell too much on the construction as it's basically just an overgrown hand launched glider. However, I would recommend that you start construction with the wing first as it is the biggest portion of the project. It is built using the Jedelsky method. Be sure to use only firm, light wood for the rear portion. If it is not firm enough the wing will flutter during launch and may even peel off, so be careful in your wood selection. Also I would strongly advise that you take the time to add the spruce leading edge. I know it's a temptation to leave it off, but take the time and add it. It will extend the life of the model many times by eliminating leading edge dings and knicks usually picked up in flying..." 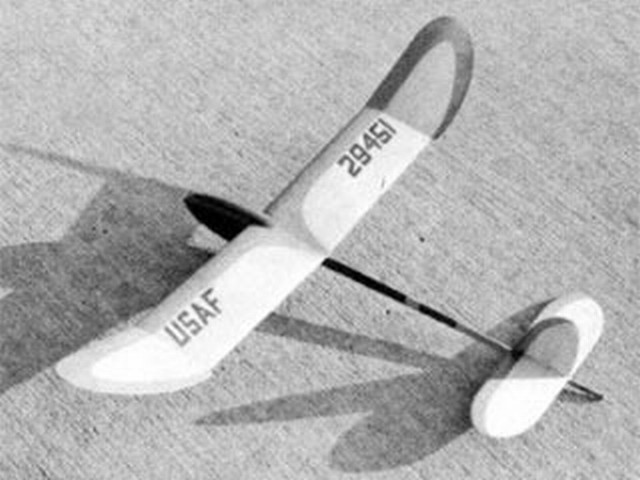